Astronomers have discovered an extremely distant galaxy that is expanding by more than 2000 new stars each year.

Using the European Space Agency's Herschel space observatory they have seen images of the galaxy as it was when the Universe was less than a billion years old.

This is the most active that astronomers have seen such a young galaxy and since this discovery they are re-thinking some fundamental ideas about how galaxies form and evolve over time.

The newly discovered galaxy, known as HFLS3, appears as a faint red smudge in images from the observatory's Herschel Multi-tiered Extragalactic Survey (HerMES). In reality, this represents the activities of a star-building factory, which is transforming gas and dust into new stars.

"This particular galaxy got our attention because it was bright, and yet very red compared to others like it," says Herschel researcher Dr Dave Clements from the Department of Physics at Imperial College London.

Tens of thousands of massive, star-forming galaxies have been detected by Herschel as part of HerMES and sifting through them to find the most interesting ones is a challenge.

HFLS3 has one of the highest star formation rates astronomers have seen; over a thousand times faster than our own galaxy, the Milky Way.

According to current theories of galaxy evolution, galaxies as massive as HFLS3 should not be present so soon after the Big Bang.

Even at its young age of 880 million years, HFLS3 was already close to the mass of the Milky Way, with a mass of stars and star-forming material roughly 140 billion times that of our Sun.

The astronomers have calculated that light from HFLS3 has travelled for almost 13 billion years across space, and that by now, it may have grown to be as big as the most massive galaxies known in the local Universe. 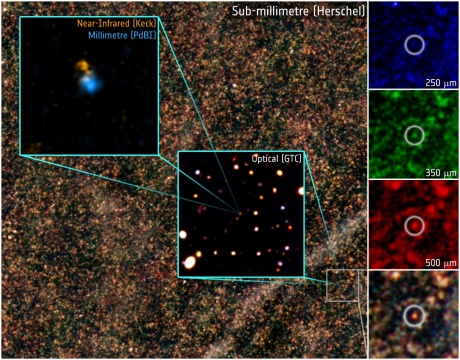 The galaxy HFLS3 as seen by Herschel (large image), along with subsequent observations to identify its unusal characters. Credit: ESA/Herschel/HerMES/IRAM/GTC/W.M. Keck Observatory

The first galaxies were thought to be relatively small and lightweight, containing only a few billion times the mass of our Sun.

They formed their first stars at rates just a few times more than the number the Milky Way does today, then grew by feeding off cold gas from intergalactic space and by merging with other small galaxies.

“With these observations, Herschel has found a rare example of a galaxy bursting with stars at a time in cosmic history when there were very few such galaxies,” says Göran Pilbratt, ESA’s Herschel Project Scientist.

The mere existence of a single such object so early in the Universe poses a challenge to current theories of early galaxy formation, which predict that they should reach such large masses only much later.

The team are continuing to comb the enormous dataset from Herschel looking for more examples of such extreme, early galaxies.

“A Dust - Obscured Massive Hyper???Starburst Galaxy at Redshift 6.34” by D. A. Riechers et al. is published in Nature, 18 Apr

On 29 April 2013 the European Space Agency announced that Herschel Space Observatory has exhausted its supply of liquid helium coolant, after three and a half years of scientific observations.

Herschel carried over 2000 litres of liquid helium when launched by ESA in May 2009, allowing its instruments to be cooled to a few degrees above absolute zero (-273 degrees celcius).

Two of the instruments also contained internal coolers to get their detectors even colder – only a third of a degree above absolute zero. Over the course of the mission the helium slowly evaporated, with the tank having now finally running dry.