Imperial College London has been granted Athena Swan silver status, one of only three universities to ever be recognised in this way.

The institution-wide award recognises Imperial’s successful development of employment practices that further and support the careers of women in science, technology, engineering, maths and medicine.

“Imperial is proud to be recognised with institution-wide silver status. This is the result of a serious long-term commitment to gender equality at every level in the College.

“If we are to fulfil our potential as a global leader in science, we must continue to eliminate obstacles to career progression and create new opportunities for women.

“First and foremost, gender equality matters because it is the right thing to do. But we also need to attract, promote and develop outstanding female scientists if we are to maintain our place as one of the world’s great universities.

“Imperial is fortunate to have so many excellent female academics – and future academics – working across our faculties.”

“The Athena Swan committee has rightly recognised how far Imperial has gone in levelling the playing field.

“These awards help focus our minds on removing barriers, spotting opportunities and improving our understanding of the issues around women in science.

“Gender equality requires hard work on a day-to-day basis. We intend to keep this up and build on Imperial’s significant progress.”

The Athena Swan Charter awards have been running since 2005, when Imperial was a founding member. They are designed to assist the higher education sector in its efforts to address gender inequalities, tackle the unequal representation of women in science and to improve career progression for female academics. 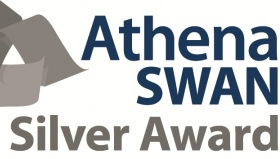 In conferring the award, the Athena Swan panel were particularly impressed by initiatives including the prizes in every department named after distinguished Imperial female scientists, the College’s annual Athena lecture and networking event, the annual dinner for all academic women, lunches for all promoted women, receptions for all new award holders and the Imperial women’s portrait series.

Other initiatives at Imperial include the Faculty Ambassadors to Academic Women, where nominated ambassadors organise and collaborate with each faculty’s principals and deputy principals to provide activities and annual events for women. Every Imperial faculty has a committee devoted to discussing issues around – and taking action on – the recruitment, retention and promotion of academic women.

In addition to the university-wide award, bronze departmental awards were conferred on Imperial’s Department of Mathematics and Department of Medicine.