Technologies for training surgeons double up as essential props in public events that make a drama out of an operating theatre crisis.

“AAAAH!” The man lying on the trolley before me moans and writhes in agony. He’s been rushed to hospital after being stabbed in the side, explains the surgeon, who lifts the man’s shirt to show me, along with a group of other curious individuals, the bleeding wound. There’s a thud as the woman standing beside me falls to the floor in a faint. 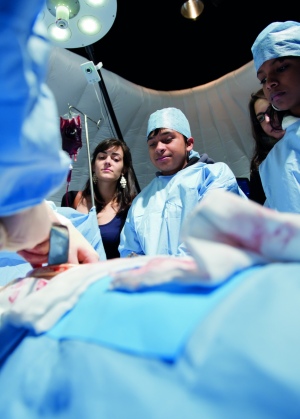 The man, we’re told, urgently needs surgery. He needs to be opened up so that doctors can check whether there’s been any damage to his internal organs, particularly his spleen. We’re warned that should the spleen detach, the blood vessel supporting it will be free to “hose around”.

Moments later, we’re asked to put on gowns and hats and we shuffle over to the operating table, where the patient’s insides are on display. The surgeon probes the slimy large intestine and invites us spectators to join him in having a poke around. As my finger slides up underneath the man’s liver, the peckish feeling I had earlier evaporates.

Welcome to the world of simulated surgery. Thankfully, the man is an actor and his convincing injury is merely an artistic prosthetic. The surgeons are real, as is the fainting member of the audience, but the injuries and internal organs subject to our prodding are not.

Roger Kneebone, new Professor of Surgical Education at Imperial, has developed these simulations to improve the training provided for surgeons. Now he is also using them to give members of the public, like myself, a flavour of what really goes on inside an operating theatre.

It certainly feels like a real operating theatre. Inside an igloo-like inflatable half-shell of a room, the dummy patient lies on a hospital bed, hooked up to a blood bag and an anaesthesia machine while his heart monitor continually bleeps. Most of the body is covered by a blue sheet, but the bloody face and matted hair are so lifelike that they momentarily distract me from the surgeon’s description of his innards.

The prosthetic organs have been developed in collaboration with Max Campbell, the artist behind many of the medical models seen on hospital television drama Holby City. Creating fake organs for surgeons is more of a challenge though, as it’s vital that they feel as lifelike as they look.

The models also provide an opportunity for Roger’s team to engage public audiences with surgery more generally. “We want to raise public awareness of surgical training,” says Roger. “The truth is that people tend to have mixed feelings about surgery. It’s scary but it’s of great interest – people are repelled by it but they’re also fascinated.”

Surgical demonstrations can help clear up any questions that people might have about surgery. “It’s important for a lot of young people who might be thinking of going into medical careers, and for people who hear about surgical procedures but don’t know what they are. The events are also a great opportunity for us to learn from our potential patients, and refine our work accordingly.”

Training with models and actors gives everyone a much better idea of what a real operation is like. “When I came to Imperial 10 years ago, surgical skills were taught with an emphasis on the technical,” says Roger. He recalls that while students were honing their stitching skills, it was only on pieces of latex. “It doesn’t give you an idea of what it’s like to treat someone who has been stabbed, had a few drinks, or just come off their bicycle,” he says. 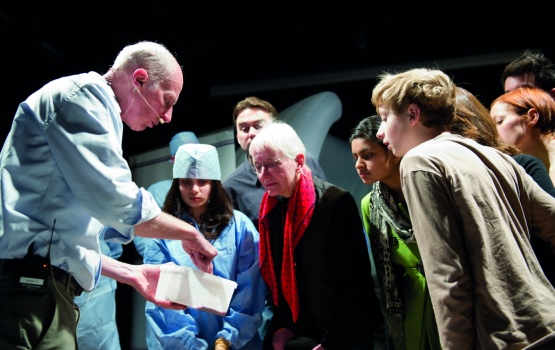 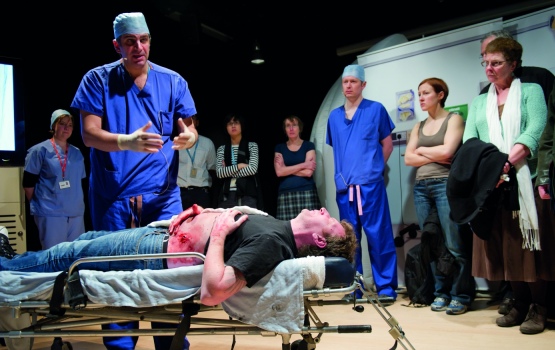 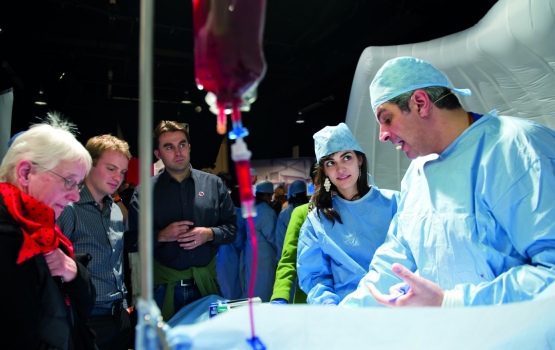 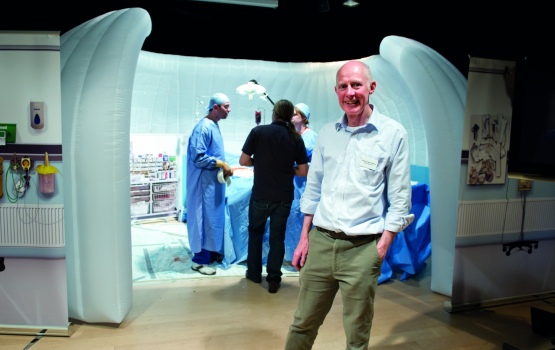 This is where the actors come in. “Having a real person there gives the clinician a sense of urgency,” Roger says. “You need to be able to respond to people who are very anxious and very sick.”

The ‘theatre’ has been put together by a team of surgeons, psychologists, designers and industrial engineers Matt Harrison (MEng Mechancial Engineering 2002) and Cian Plumbe (DIC Mechanical Engineering 2004). While the overall impression is that of being at the heart of a surgical procedure, a second glance at the backdrop reveals that the trolley of surgical equipment is actually a poster, and that the heart monitor consists of two iPads mounted on a wheeled cabinet. The fact is that when your nose is centimetres away from a bleeding spleen, the background details lurking in your peripheral vision don’t have to be quite as realistic.

As a result, the entire set-up can be put together quickly and cheaply, and can even be carried around in a few backpacks. Members of Roger’s team have just started taking their portable simulation set-up to hospitals around London to train surgeons from other places as well as Imperial, by giving them the chance to experience a simulation.

Installing the surgical set-up at public venues is a more recent line of work for Roger and his team. At one event, the group put together a simulation at Imperial’s Reach Out Lab, for London schoolchildren who had been affected by knife crime. “All the children knew someone who had been involved in a knife attack, but they had no idea of what happened once the injured person had been taken off in an ambulance,” says Roger. “It was the perfect way for them to find out.”

So far, Roger’s team has put on simulations for young and adult audiences at London venues including the Wellcome Collection, the Natural History Museum and the Science Museum, as well as the Cheltenham Science Festival.

It must be stressed, though, that the gory nature of the events rules them out for the faint-hearted. “We have processes in place to look after people who feel squeamish”, says Roger. “At the same time, the occasional pair of weak knees helps confirm that things are genuinely convincing.”

Even the surgeons can get caught up in the realistic situations. When the group ran a simulation of a trauma scenario in which a man had been hit by a lorry, the clinician got so carried away that he pulled out his scissors and cut off the actor’s trousers, T-shirt and even his underpants, much to the actor’s surprise.

Roger and his colleagues are now turning their attention to finding realistic ways of simulating other medical procedures for trainee doctors, such as mimicking the feeling of internal assessments by using haptic technology to develop devices that give the user tactile feedback.

Internal assessments, of the vagina or rectum, for example, are tricky to teach. “The student can’t see what they’re doing and neither can the teacher,” says Roger. With the device he’s currently working on, the student would be faced with an actor lying on a bed but, instead of sticking their finger in the actor’s bottom, they would place it in a cradle connected to a computer. “When you put your finger into the ‘anus’, it feels realistic and, while you’re doing that, you still have to respond to a real, wincing person,” says Roger.

Meanwhile, there are plenty of real, wincing members of the public recovering from their close-up encounters with the medical drama they have just witnessed. When the actor comes back on stage at the end of the performance, I am impressed with the long, red signature of his ‘emergency surgery’ that’s been artfully painted down his belly in place of the original bleeding wound. While the surgeons remove their masks to take questions from the audience, the rest of the team roll up their sleeves to clear away the splattered blood in time for the next performance.