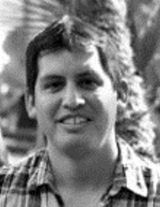 Renato Salas-Moreno a PhD student here in the Department of Computing supervised by Professors Andrew Davison and Paul Kelly has been featured in a New scientist artice entitiled "Remembering objects lets computers learn like a child". The article talks about Renato's and his collegues  work in the Robot Vision Group on SLAM. Renato's research is supported by a PhD scholarship from AMD

SLAM is a process by which a mobile robot can build a map of an environment and at the same time use this map to deduce it's location.

In a new system, called SLAM++, the computer constantly tries to match the points and lines it sees to objects in its database. As soon as it finds a shape it can identify – often after seeing only a part of it – that area of the map can be filled in. Currently, the database is prepared by hand, but the next version will allow the system to add new objects itself as it encounters them. "It's similar to how a child learns about the world," says Salas-Moreno.

The database also lists the properties of the stored objects. So when the computer recognises a chair, it will know what they are used for, how much they typically weigh, and which way up they go. This knowledge will help digital avatars interact with the real world in augmented reality applications.

The SLAM++ system was demonstrated live to the general public at the Imperial Festival in May this year.