Roderick Rhys Jones, Chairman of the Friends of Imperial College group, recalls their recent visit the Large Hadron Collider at CERN in Geneva.

In the late eighteenth century visitors came from all over Europe to listen to philosopher and writer Voltaire, who, having been exiled from Paris for his revolutionary views, settled in a country house on the outskirts of the small hamlet of Ferney on the French-Swiss border.

Travellers today are flocking there anew. Now called Ferney-Voltaire, the town is a stone’s throw from CERN headquarters and lies within the 27km ring of the Large Hadron Collider (LHC) – the must see destination for scientists and philosophers from across Europe and beyond.

The Friends of Imperial took 26 members there on a three-day visit at the end of April as guests of Professor Teijinder Virdee (Physics).

On the morning of Friday 26th, we gathered at CERN’s visitor centre for a tour and talk by Dr Mario Campanelli, a CERN researcher.

Mario explained how hydrogen from prosaic-looking gas bottles are stripped of their electrons to create protons that are then accelerated in the LHC by successive superconducting electromagnets until they reach close to the speed of light.

The size, complexity and precision leapt out at us. It was a sight to marvel at; a Taj Mahal moment of wonder.

– Roderick Rhys Jones on seeing the CMS experiment at CERN

Two beams of these superfast protons are sent in opposite directions then brought into collision – at which point detectors sift through the wreckage looking for exotic new particles, hints at new laws of physics and even extra-dimensional universes.

Twenty minutes by bus through the French countryside and we arrived at the spot along the LHC ring, where these cataclysmic collisions take place deep underground at the Compact Muon Solenoid (CMS) detector. 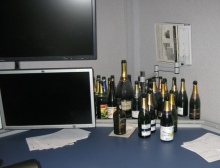 After being greeted by members of Professor Virdee’s team we were escorted into the control room, which, when operating would be full of scientists monitoring the detectors far below us. In one corner was a collection of champagne bottles, each one marking another milestone in the success of the project.

With so much data generated by each of those collisions, CERN has chosen to spread the workload to computing centres and researchers around the world. Earlier, we had seen a screen in the computer centre showing the nodes on the global network and were all delighted to see that Imperial was the busiest institution in the UK at the time (see image below). 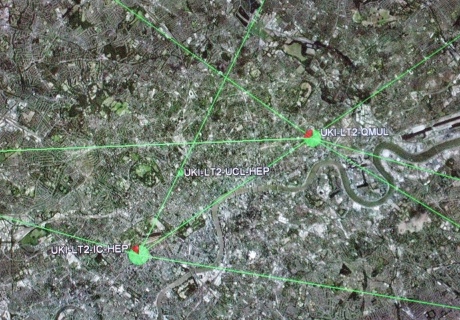 We were given hard hats before descending 100 metres to the level of the LHC tunnel. Walking through a maze of rooms and passageways we eventually passed through the huge concrete shield surrounding the CMS.

The passageway opened out onto a viewing gallery about halfway up a vast cavern filled on both sides by the shining multi-coloured concentric circles of detectors. Everyone stopped to take breath. The size, complexity and precision leapt out at us. It was a sight to marvel at; a Taj Mahal moment of wonder.

Some of the new technology developed at CERN has already found real-world applications in medicine and industry – including cancer treating hadron therapy and high-volume computing. There are also older technologies that have found new uses. Of particular note are the 80,000 scintillating lead tungstate crystals (heavier than iron, yet totally transparent) used in the detectors. Originally manufactured to protect the nose cones of Russian intercontinental ballistic missiles on re-entry, they are now being used for the international exploration of the beginning of the universe. Swords into ploughshares, indeed. Voltaire would have approved.

Professor Virdee gave a public talk entitled Unveiling the Secrets of the Universe on 4 June organised by the Friends. To listen click here: http://www.friendsofimperial.org.uk/Media/Slides/FOIC_CERNLHC_20130604.m4a

Friends of Imperial College is an association of people with an appetite for science. It supports the College by putting on public lectures, organising visits, and making donations to the Student Opportunity Fund and the Rector’s Scholarship Fund. Friends has arranged behind-the-scenes visits to College research facilities for some years and has recently expanded to off-campus trips, including to Diamond Light Source at Harwell, and the three-day trip to Geneva taking in CERN and other local science attractions. Our party at CERN was a cross-section of our membership: some in their twenties, some in their eighties; some with multiple science degrees, some with none; some were alumni, some not, some living in Knightsbridge, some in Edinburgh.Everyone is welcome to join: www.friendsofimperial.org.uk

Roderick Rhys Jones, Chairman of the group, was recently awarded an Imperial College Medal for exceptional contribution to the College through his work with Friends.