View from the summit of Mt Paektu. Credit: Clive Oppenheimer.

North Korea, UK and US scientists work together as Mt Paektu, responsible for one of the largest eruptions recorded by man, shows new signs of life.

Mt Paektu, a towering volcano, 2800 m at its highest point, lies high up on the border between China and North Korea. Largely unknown to the Western world, this mysterious giant is responsible for one of the most intense eruptions recorded in human history.

Mt Paektu last erupted just over 1000 years ago, in 950 AD. During this eruption, ash fell thousands of kilometres away. The huge explosion caused the volcano’s crater to collapse, forming a 4 km-wide hole, today the site of a giant lake.

In 2002, Mt Paektu started showing some worrying signs of life. Earthquakes and tremors could be felt in its vicinity and the volcano started to swell up, all indications that hot magma may be filling its interior once again.

This sparked a lot of regional interest, leading scientists on both sides of the border to turn their eyes to the volcano. To better understand this warming giant and monitor its activity, North Korean scientists reached out to international researchers in an effort to bring world experts together to study the volcano.

Dr James Hammond, a seismologist in the Department of Earth Science and Engineering at Imperial College London, has been one of the chief scientists involved with this project: “It’s rather fortuitous really, we were actually invited by the Koreans. The Koreans reached out because there was some activity on the volcano, seismicity and inflation”.

Talking about how the project came together, Dr Hammond says: “I went to Korea in 2011. We flew up to the volcano and spent about a week on it. We had lots of discussions with the scientists to understand what they knew about the volcano. We sat down and all together thought we could come up with a project”.

Mt Paektu is a special place. In addition to its stunning landscapes and fascinating geology, it is also a site of pilgrimage for both Korean and Chinese people: “It has a cultural significance for all of the Korean people but also for the North Koreans, as it is the birth place of Kim Jong Il. It is a very revered site”, Dr Hammond explains.

“The biodiversity is completely unique and the geology is fascinating, with very thick pumice deposits everywhere and buried trees, thousand year old trees. You can actually see the bark. So it is really a special environment”.

While the project will involve close monitoring of Mt Paektu’s activity by the international team, its primary aim is to better understand the volcano and the huge 950 AD eruption.

To do this, the researchers were split into two teams. One team, led by Dr Hammond, carried out seismic surveys on the volcano, using earthquake data to scan the inside of the volcano and understand its structure. “It’s like a doctor doing a CAT scan, using earthquake energy rather than X-rays”, Dr Hammond explains. “We’ll record any local seismicity that happens during this time but the main focus of the project is the seismic imaging, trying to understand where melt and magma might be beneath the volcano and what drives the volcanism”.

The second team, led by Prof Clive Oppenheimer from the University of Cambridge, studied the local geology around the volcano to better understand the 950 AD eruption. “From the geology side, it’s all about characterising the previous eruption”, Dr Hammond says. “We’re going to work with the Koreans, as they have worked on this extensively. We will collect samples, characterising the millennium eruption and any other eruptions.”

The initial project will last one year. Scientists will continue to deploy seismic stations on the volcano and characterise its geology. But the project does not stop there. After collecting data and samples, these have to be studied, interpreted and the results published. This will be a truly international collaboration with the North Korean scientists. “The next stage is to get some Koreans to the UK to work on the data. The idea is that this is a proper collaboration. We’ll publish together in international journals”. 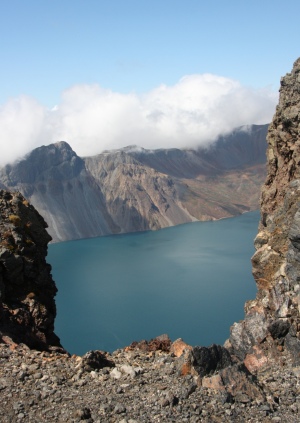 When I asked him whether this work could open the way for more collaboration between North Korean scientists and research groups worldwide, Dr Hammond replied: “Hopefully. One of the big steps in getting this project off the ground was involving the Royal Society here in the UK and the AAAS [American Association for the Advancement of Science] in the US, two big international organisations that cover all sciences. The idea is that, if other groups want to come in, they can work under these agreements. We set the precedent but the idea is that in the future this will lead to more”.

“They key is that if you find good people on the ground, good scientists who are as passionate as you about what you want to do, then things will happen, that’s the key and that’s why it’s been successful”, he added.

As has too often been the case, natural disasters such as volcanoes, earthquakes, tsunamis or hurricanes, can affect anyone, regardless of nationality or political affiliation. Can science play an important role in unifying communities in the face of these catastrophes?

“I think science has the potential to be incredibly useful in terms of diplomacy. Science diplomacy can keep communication open when other avenues may be closed. I think the reason it is so powerful is because it is so apolitical”.

“Earth Science is in an even better position than many other sciences. A volcano that may erupt can have local impacts, it can have regional impacts and it can have global impacts. It’s something we really need to understand. There is nothing political about it. Understanding a volcano, that’s just good for humanity”.