Propofol discovery may help lead to development of new anaesthetics New research on the most commonly used anaesthetic drug could help unravel a long-standing mystery about how it induces a pain-free, sleep-like state.

General anaesthetics are administered to tens of millions of people every year in hospitals, where they are used to sedate patients undergoing surgery. Despite this, scientists have yet to understand how the drug interacts with its targets in brain cells to achieve this effect.

Following years of research on propofol, which has become the most commonly used anaesthetic since it was introduced in the 1980s, researchers at Imperial College London and Washington University School of Medicine have published a study in the journal Nature Chemical Biology in which they identify exactly how the drug acts at a molecular level.

Researchers had already identified the receptor that propofol interacts with in the brain. Having a more detailed picture of exactly how propofol works in the brain may help scientists to design new versions of the drug that reduce the risks involved in surgery and ultimately improve patient safety.

Propofol has also become widely known as the drug linked to the death of superstar Michael Jackson in 2009. 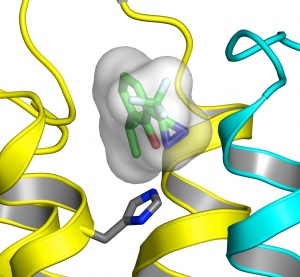 Propofol, in grey, binds to the GABAA receptor in the brain

"The job of the skilled anaesthetist is so important because in addition to the desirable effects of anaesthetics which make surgery possible, current anaesthetics can have unwanted effects on the heart, on blood pressure and can also interfere with breathing during surgery," said the study's co-principal investigator Professor Nick Franks from the Department of Life Sciences at Imperial College London.

"Whilst propofol is the best anaesthetic we have today, it is important for patient safety that we come up with new versions of the drug that work just as well or better as anaesthetics, but have fewer or less dangerous side effects."

"For many years, the mechanisms by which anaesthetics act have remained elusive," explained co-principal investigator Alex S Evers, MD, the Henry E. Mallinckrodt Professor and head of the Department of Anesthesiology at Washington University.

"We knew that intravenous anaesthetics, like propofol, act on an important receptor on brain cells called the GABAA receptor, but we didn’t really know exactly where they bound to that receptor."

In an attempt to understand how propofol induces anaesthesia during surgery, scientists have tried to identify how and where it interacts with receptors in the brain called gamma-aminobutyric acid type A (GABAA) receptors. Activating these receptors — with propofol for example — stops a nerve cell communicating with its neighbours, leading to unconsciousness.

For this study, the scientists created a molecule that closely resembles and mimics propofol but has an added hook that grabs onto the GABAA receptor and won't let it go when it is activated by a bright light. They then extracted the receptor, cut it into pieces and identified the place on the protein that the propofol mimic had attached to.

The scientists will now identify binding sites of other anaesthetics. They believe their approach also can be used to study other types of drugs, such as psychiatric agents and anti-seizure drugs.