Imperial scientists are working on a space mission that will listen to violent cosmic events that send out ripples in the very fabric of the universe.

Probably one of the first real bits of physics we learn at school is how the force of gravity keeps us all from floating off into space — a lesson helped to stick by a certain apocryphal tale about a scientist and a falling apple.

But gravity is actually rather more complex and profound than this — certainly more complex than Isaac Newton could have imagined, and indeed there are still some mysteries yet to be resolved to this day about gravity.

In 1916 Einstein came up with his famous general theory of relativity, which completely redefined gravity. No longer was it thought of as simply a mutually attractive force between objects – but rather a deformation in the underlying fabric of the universe, known as space-time. Objects with mass distort space-time, essentially stretching it in all directions, and in doing so ‘tugging’ at other nearby objects, affecting their motion.

Yet, no one has ever observed a gravitational wave directly. We can infer their presence based on the energy that binary stars lose when creating gravitational waves. But definitive confirmation is proving rather elusive.

And if there’s one thing we know about physicists, it’s a dogged determination to fill gaps in theory — as shown by the confirmation of the existence of the Higgs Boson at CERN, 60 years after it was first postulated in theory.

But with gravitational waves it’s so much more than balancing the books, as Tim Sumner, Professor of Experimental Astrophysics at Imperial explains.

“It opens up a whole new way of doing astronomy,” he says. “Over the centuries astronomy has grown to cover more and more of the electromagnetic spectrum, seeing more colours if you like, whether visible light, infrared, X-rays or submillimetre. We’ve come to the realisation that the more ways you look at things, the more you learn. But it is always just looking, it’s always visual. With gravitation waves, some people have said it’s analogous to adding a sound channel; it’s a totally different way of collecting information.”

Tim and his colleagues have been investigating the possibility of observing gravitational waves since the early 1990s, and in 2015 they will finally get that chance with a European Space Agency (ESA) led mission named the Laser Interferometer Space Antenna (LISA)-Pathfinder.

But how does one look for something that’s never been seen before and does not give off any light or an electromagnetic signature?

All types of waves, whether sound waves or ocean waves, create a periodic squashing and stretching effect in the medium in which they are travelling. That also applies to gravitational waves; but because the medium they are travelling in – spacetime – is three-dimensional (really four-dimensional, but we can ignore time in this case) it’s slightly different.

Firstly imagine a circular cross-section of space with a gravitational wave travelling right through the centre. As the waves pass through the middle of our imaginary spacetime hoop, they first stretch it lengthways (along the y-axis) while squashing it widthways (along the x-axis). Then as the next wave break passes, the reverse happens – it’s stretched in the middle and squashed lengthways, and so on (see moving graphic, right).

The key to actually detecting this is to try and measure the squashing and stretching using two fixed points. The concept it not unlike having two corks floating on the surface of the sea – the distance between them will expand and contract as a wave passes. And that’s what ESA scientists are trying to do with LISA-Pathfinder.

On the right path

They plan to send a spacecraft to a special point between the Earth and the Sun, known as the L1 Lagrangian point, where their combined gravitational pull ‘locks’ the spacecraft in a stable position, orbiting the Sun at the same speed as the Earth (scroll down to the second video).

This is important because inside the spacecraft will be a chamber containing two proof masses (our ‘corks’) floating precisely 35cm apart. Lasers will watch over them with an eagle eye to spot any deviation in that distance that might indicate a stretching or squashing in spacetime and the passing of a gravitational wave.

It’s a truly elegant concept but not an easy engineering feat, being such a far cry from the familiar territory of mirrors and detectors used in light astronomy.

“It’s been rather a hard sell because the technology is so different; it’s not straightforward for an agency to take that on and commit however many hundreds of millions of euros,” Tim says.

Indeed the specification sheet reads like a series of technological firsts. The spacecraft must remain centred on the proof masses so an advanced propulsion system had to be devised based on micro-Newton thrusters. 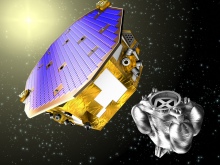 The state-of-the-art laser interferometer meanwhile will be able to detect relative movement of the proof masses of around one billionth of a millimetre (one picometre or 10-12m).

With such a staggering level of sensitivity at stake, it’s absolutely vital that any potentially confounding sources of error are mitigated. And that’s where the Imperial team comes in.

Tim can trace his involvement in the mission way back to the early 1990s when they were working on a different mission to test  the equivalence principle of Einstein’s general theory of relativity, which also required the use of proof masses. They discovered that, rather inconveniently, cosmic rays in space could penetrate a space craft and charge the proof masses, causing them to interact with the chamber walls and spuriously offset the distances. 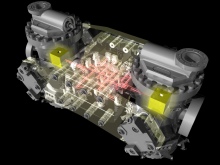 Although somewhat throwing a spanner in the works of any mission planning to carry proof masses, the Imperial team also thankfully came up with a solution, which owed much to serendipity. On yet another unrelated space mission the team had worked on, they provided hardware to produce UV light to calibrate astronomical detectors on the ROSAT mission. It just so happened that having UV on a spacecraft seemed to be an excellent way of discharging surfaces and so negating the problem of charged proof masses.

“We then found ourselves more or less taking responsibility for the charging problem that would be present on LISA-Pathfinder. Really it was a series of coincidences that led us here and we’ve stuck with it since then because of the fabulous science we’re going to do at the end — not because we’re interesting in discharging proof masses as such!” Tim says.

LISA-Pathfinder is considered a technology demonstration mission and a precursor to a similar, but much bigger experiment. The original ‘LISA’ concept mission (now referred to as eLISA) envisaged proof masses separated by five million kilometres (as opposed to 35cm in the forthcoming LISA-Pathfinder mission). 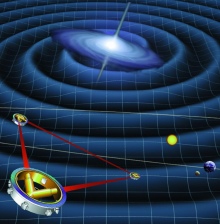 With more space to look for the tell-tale ripples that mark a gravitational wave, it will be a powerful tool indeed. “The cosmology that it will offer will be truly amazing,” says Tim.

This year scientists got particularly excited by the results of the Plank mission which looks at a form of light called the Cosmic Microwave Background – the ‘afterglow’ of the big bang, which essentially shows the universe when it was around 380,000 years old. But eLISA has the potential to go way beyond that.

“With gravitational waves you can reach parts of universe you can’t ever hope to reach with the electromagnetic spectrum, it’s a much deeper probe of the universe. In principle gravitational waves can go right down to the first fractions of a second after the big bang,” Tim says.

There are other questions that eLISA might be able to answer, such as the nature and origin of black holes. At the heart of most galaxies, including our own milky way are supermassive black holes. Some of them are so enormous (upto 10 billion times the mass of our Sun), it’s difficult to explain how they got there. One theory is that they grew by merging with other black holes, a cataclysmic event that should show up in a pattern of gravity waves.

Should the larger eLISA mission secure funding in an upcoming competition, it could launch in 2028. That’s certainly a soundtrack worth waiting for.