Imperial academics and military experts are collaborating to better understand the effect of explosive devices on the human body.

Twelve years ago this month, at the start of the military campaign in Afghanistan, the term ‘IED’ (improvised explosive device) would have had little meaning in the public consciousness. But now, after more than a decade of war, it carries a particular tragic poignancy — linked as it is to news reports of terrible casualties and fatalities of soldiers and civilians. 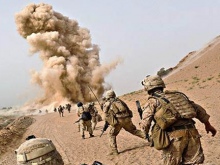 Blast injuries are not unique to the present conflict but what is different now is that more and more victims are surviving, due to improved first aid and medical evacuation procedures in the immediate aftermath of incidents.

Yet, there is still much we can do in a preventative sense beforehand to limit the severity of injuries when IED incidents do occur and also in terms of aftercare to minimize the long-term repercussions.

That was the impetus behind the creation of The Royal British Legion Centre for Blast Injury Studies (CBIS) at Imperial in 2011. Building on the existing work of the Blast Biomechanics and Biophysics Research Group at the College, the centre provided a unique opportunity for civilian and military collaboration (see box out opposite). 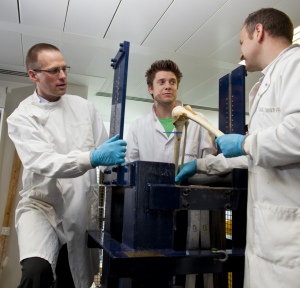 “Military medical care is fantastic and has developed over the past decade due to war,” says Professor Anthony Bull (Bioengineering), Director of the CBIS. “We feel now is the time to capture that and learn from these injuries not just for future warfare, unpleasant thought as that is, but also for knowledge transfer to civilian medical care and protection. That is the premise of the Centre.”

The problem is not a straight forward one though – from the physical nature of the blast wave in the microseconds after the explosion to the long term effects victims experience many years afterwards – there are many things we do not fully understand.

As a consequence the CBIS’s approach is very multifaceted gathering experts from different specialities – engineers, physicists, biologists and clinicians.

Since the Centre launched two years ago one important piece of research has been the collection and analysis of data from the conflict itself. In fact they have recently published an analysis of the largest dataset of IED fatalities with complete CT scans and autopsies available – with the permission of Her Majesty’s Coroner.

That has shown that the primary cause of death for soldiers caught by an IED in the field is blood loss; while for troops in a vehicle it is head injuries, secondary to a condition called blast lung.

“We only have that information available to us because we’ve embedded military personnel in the centre. That really enabled us to explore the reasons and the cause of death, which then allows us to explore what we think the next level of survivorship might be, given better levels of protection or care,” Anthony says.

Of course there’s only so much information one can ascertain about a blast event after the fact. There’s a need to reproduce aspects of the explosion as accurately as possible in the lab and study the results in detail in order to identify preventative solutions. The CBIS now has an enviable suite of specialist equipment and methodologies to do just that.

One of the headline pieces of kit is the bespoke anti-vehicle, underbelly, blast-injury simulator (AnUBIS), which enables academics to understand in more detail how roadside bomb blasts impact on the lower limbs.

Meanwhile, the split Hopkinson bar device simulates how shockwaves from roadside blasts affect people at the cellular level. Usually used to test the stress-strain response of solid materials, it has been cleverly adapted by the team to examine cells. Essentially, it is a pneumatically-operated projectile that strikes a bar, generating a stress wave which is transmitted to a single layer of cells on a coverslip, or suspended within a medium.

Outside of the lab, under the watchful eye of their military collaborators, the CBIS team even performed some live explosive tests with stripped-out vehicles and biological surrogates out in the field this summer and are currently analysing that data.

In an effort to tie the whole story together – from molecule and cells, through to tissues, organs and limbs – engineers at the Centre are constantly working to develop accurate computational models of blast waves and their effects. This will be particularly useful in devising and validating preventative measures.

“We feel our efforts have already had some effect in the theatre of war,” says Anthony. “We’ve advised on sitting posture in vehicles and also some of the equipment such as blast mats, boots and medical treatment – for example how you use pelvic binders. We’ve also been involved in improving decision making regarding the long and medium term outcome of certain type of injuries and how that influences your early treatment.”

The CBIS has now moved into new dedicated labs with the ability to perform experiments at much higher blast energies. Going forward, one of the most challenging research questions the Centre is trying to understand is the long term side effects of blast injuries at the fundamental biological level.

“We are beginning to get a really good handle on what the body experiences from the outside, but then how that’s transmitted through the body and what the cells are experiencing and subject to is really tough,” says Anthony.

One painful and debilitating complication that can develop over time in the wounded limbs of blast victims is the abnormal formation of bone in muscle tissue, outside the confines of the skeleton where it should remain – a process known as heterotopic ossification. One theory is that stem cells in the limb, which have the potential to form multiple different tissue types, are somehow nudged into becoming bone by the high-intensity blast waves. That is something being investigated by biologists at the Centre.

In addition, more than half of people injured by IEDs show evidence of nerve damage that persists long after the tissue damage has healed and often distant to the site of direct impact. “Basically you can’t feel or move your limb,” Anthony says. “And if you’ve lost a limb and one of the surviving limbs is not useful to you that is a significant problem.”

The cause of these deficits is not known, but the answer may lie with specialised Swann cells which surround nerve fibres as an insulating layer, facilitating fast electrical impulses that are needed for complex movements and walking.

The CBIS recently attracted a grant from charity ‘Find A Better Way,’ which will help to train trauma surgeons in countries where land mines are a real problem to the civilian population. For example when lower leg amputations are necessary it is preferable to salvage the knee because it can better take the load of various prosthetics than say a trimmed thigh bone. That calls for specialist knowledge and techniques.

As Anthony points out, practical solutions of this sort are a very important part of what CBIS is about and the legacy it hopes to leave. Anecdotal evidence suggests that there are perhaps 1000 blast injuries of this type every month around the world through landmines, terrorism or accidents at munitions or fireworks factories.

“Much like the mission statement of the College, which is about research and its application to industry and healthcare, our aim and motivation is to have an effect on blast injuries pretty quickly.”

The establishment of a collaborative centre with military and civilian clinicians, scientists and engineers working together to address all aspects of blast injuries is a first for the UK. It was only made possible due to an £8 million research grant from The Royal British Legion – a charity that has been helping the Armed Forces community past and present for 90 years.

“The Centre for Blast Injury Studies aims to improve treatment and recovery for those injured serving their country, as well as to reduce the number and extent of blast injuries in the first place. Enhancing the quality of life for the injured, potentially reducing their long-term disability and dependency, while protecting our service men and women better in the future, is of major importance.

“It chimes perfectly with the support The Legion gives to the whole serving community and we are therefore very proud to be supporting Imperial’s pioneering and world-class work in this field. We are making a long-term investment in the welfare of all who serve.”