The new Centre, to be based in Imperial College Business School, will be headed by Professor Franklin Allen and Professor Douglas Gale. Frequent collaborators, Professors Allen and Gale, are renowned for their pioneering research into financial crises and market contagion - that is, when relatively small shocks in financial institutions spread and grow, severely damaging the wider economy.

The Brevan Howard Centre will be one of the most important centres for research in the world.

The Centre has been hailed by leading figures in government, economics and academia on both sides of the Atlantic, including former US Treasury Secretary Larry Summers who said it will "make our financial system work better and make financial policy much wiser".

The Brevan Howard Centre has been launched thanks to one of the largest donations in business education history, £20.1 million. The gift comes from Brevan Howard, the world's third largest hedge fund, at the behest of its co-founder Alan Howard, an Imperial alumnus (MEng Chemical Engineering & Chemical Technology 1986).

The formation of the Centre "marks a leap forward for Imperial College Business School," according to its new Dean Professor G. "Anand" Anandalingam, who has also joined Imperial from the US. 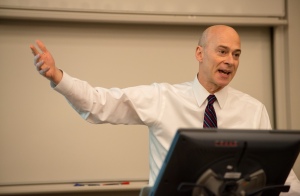 The Mayor of London, Boris Johnson, said: "Great scholars and thinkers are intrinsically linked to the success of our city, and having convinced these two world leading minds to move here will help Imperial College further cement London's position as the world's intellectual capital."

Kenneth Rogoff, Professor of Economics at Harvard University and former IMF Chief Economist, said: "Franklin Allen and Douglas Gale are two of the giants of modern banking and corporate finance.  Together, they have literally written the book on comparing financial systems.  The addition of these two major theorists is a big boost that should generate keen excitement among students, faculty and professional economists throughout Europe."

Larry Summers, former US Treasury Secretary and President Emeritus at Harvard, said: "If anything is clear from the crisis from the last five years it is that much of how our financial system takes risk, manages risk, and transfers risk needs to be profoundly rethought. This requires the detachment, the convening power and the ability to influence the next generation that only a great university possesses. The Brevan Howard Centre will make our financial system work better and make financial policy much wiser. I have no doubt that it will make profoundly important contributions to the discourse on global finance."

Mervyn King, former Governor of the Bank of England, said: “Under the direction of Franklin Allen and Douglas Gale, two of the world’s leaders in financial economics, the new Brevan Howard Centre for Financial Analysis will be one of the most important centres for research in the world and an invaluable source of new thinking for policymakers”.

Alan Howard, founder of Brevan Howard, said: "I am delighted the Brevan Howard Centre at Imperial is going to be led by the world-class team of Professors Franklin Allen and Douglas Gale. Franklin and Douglas will create a vibrant institution to study financial markets by bringing together academics, policy makers and practitioners.  During the financial crisis and in its aftermath, my colleagues and I became convinced of the need to improve wider knowledge of financial markets, especially given their enormous impact on businesses and households. Under Franklin and Douglas' leadership, the Brevan Howard Centre will be perhaps the world's most important locus for studying these issues. My sincere hope is the Centre will make fundamental contributions to our understanding of financial markets, vault Imperial's business school into the top ranks, and add to the dynamic intellectual community in Britain and Europe." 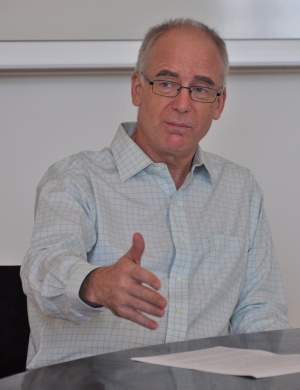 Douglas Gale, Director of Research of the Brevan Howard Centre for Financial Analysis

Professor Douglas Gale, Director of Research at the Brevan Howard Centre, said: "I am very excited to be joining the Imperial College Business School and their newest venture, the Brevan Howard Centre. Although the Business School is relatively young, it has made rapid progress and I am confident that it can attain the global stature that Imperial College has in the natural sciences, engineering and medicine. Thanks to the generosity of Alan Howard in funding the Centre, we have already taken a big step toward that goal."