The company BBOXX, a provider of solar power technology systems for homes in developing countries, has received a $US 1.5 million investment from Vinod Khosla, one of the founders of the computer company Sun Microsystems who now runs a billion dollar venture capital business based in California.  BBOXX also received a further $US400,000 from the British venture capital fund Synergy Growth. 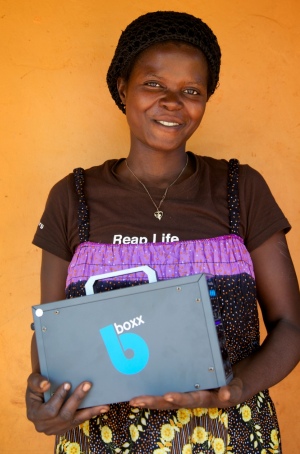 Currently, 1.4 billion people in the world live without access to electricity. Providing electricity enables people to improve their quality of life. For example, providing solar power can improve local economies enabling people to establish small enterprises such barber shops in their local communities. The investment will enable the team at BBOXX to realise their goal of bringing electricity to 20 million people in developing countries across the world by 2020.

BBOXX was established by Imperial alumni Mansoor Hamayun, Laurent Van Houke and Chris Baker-Brian who all graduated in 2010 with a Masters of Engineering degree. The company develops an all-in-one system for the home that integrates a solar panel, a battery and a control panel, which is easy to install to minimise costs. BBOXX also sells other products such as fridges, shavers, radios, lights, fans and phone chargers so that people receiving electricity for their first time can fully enjoy the advantages that these technologies can bring.

BBOXX stems from an idea the team had as undergraduates at Imperial in January 2008. They established a charitable organisation called e.quinox with the support of Professor Peter Cheung,  Head of the Department of Electrical and Electronic Engineering, and the Student Union. The charity, which is still going strong today, sees students creating and installing solar kiosks in remote villages in countries such as Tanzania and Rwanda, providing electricity to communities for the first time.

“When we set up e.quinox all those years ago we had no intention of doing it on a commercial level,” said Mansoor Hamayun, CEO of BBOXX and the founding chairman of e.quinox.

However, in their final year at university the team was in the process of handing over the reins of e.quinox to the next generation of eager student engineers when they realised that two years of leading the charity had given them the unique skills to run a company.

“The aim when we established e.quinox was to deliver solar power for free. However, to provide power to millions of people around the world, we knew we needed more funds and turning our idea into an ethical, clean technology business enabled us to raise capital and export our ideas around the world,” said Mansoor.

Their work with e.quinox also provided an insight into the challenges and expectations that customers in developing countries have. Armed with this knowledge they decided to set up BBOXX, which is now based in London with offices in 7 countries.

“With BBOXX Ltd we wanted to create the products that did not currently exist that we knew customers really wanted,” says Mansoor. “We realised from early on that we were providing not only a service, helping people to generate their own solar power, but we were also developing long-term relationships with customers via sales of products. This business model is the foundation for our growing success.”

Professor Peter Cheung, Head of the Department of Electrical and Electronic Engineering at Imperial, is also on BBOXX’s board of advisors. He helped to steer the business from its early beginnings and through this current growth phase.

Professor Cheung said: “An integral part of the experience at Imperial is that we help to equip students with the skills and know-how to tackle some of the really big global challenges we face today. They already come with the passion and desire to make things better and we channel their energy and enthusiasm into great projects. E.quinox is a wonderful example of this. Being on the advisory board of BBOXX, I am experiencing first-hand the buzz this business is creating and I really look forward to seeing it move from strength-to-strength.”

BBOXX investor Mr Vinod Khosla, whose net worth is around $1.5 billion, is a venture capitalist who founded Khosla Ventures, which focuses on investing in various sectors, most notably green technology. He is most famously quoted as saying that “if it doesn’t scale, it doesn’t matter”; meaning that if new types of clean technology currently being invented cannot be mass produced then they are not worth investing in.

“I think Mr Khosla sees the massive market share that clean technology could have in developing countries,” added Mansoor. “He could see the clear approach BBOXX has towards tackling the barriers to do with mass electrification in the developing world and I also think he was impressed by how big we managed to make BBOXX without any institutional investors.”

Asked what advice he would give to other budding entrepreneurs at the College Mansoor rather modestly said: “Always work with people way smarter than yourself, which should not be too difficult at Imperial. Running your own business is hard but very rewarding if you can continuously learn, adapt and improve your business. If one goes into business with this mentality with a bunch of smart people and tackle a problem big enough, then it can only lead to success.”

Mansoor’s advice to the next generation of Imperial entrepreneurs

Don’t over think it

Products won’t work, customers will be angry, people will write harsh emails – deal with it

Have patience as things will go wrong before they go right

Stand up for what you believe in