The prestigious designation from the Department of Health recognises Imperial College AHSC as a centre of excellence in healthcare, research and education.

Since 2007, Imperial College AHSC’s achievements include research-led improvements in clinical practice such as the prevention of bowel cancer, reducing the impact of birth asphyxia, better survival rates for chronic myeloid leukaemia, and the safer removal of liver tumours (see sidebar, right). 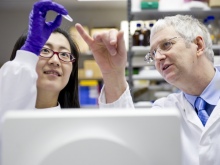 Over the next five years, Imperial College AHSC plans to build on this pursuit of world-class education, innovation and patient care by tackling common causes of morbidity and mortality, including obesity, diabetes, neurodegeneration, strokes, infection and antibiotic resistance, as well as rarer diseases. The AHSC will also help create wealth, making a substantial contribution to the London and wider UK economy.

As part of these efforts, the AHSC will work to improve patient safety and the patient experience; discover, design and implement new surgical techniques; and use the very latest advances in informatics and real time diagnostics to improve healthcare outcomes.

“Our extraordinary cluster of discovery, innovation and enterprise brings together some of the world’s finest researchers, educators and clinicians. Patients are reaping the benefits, in London and throughout the world."

“Imperial College AHSC has created a critical mass of world-class research, teaching and patient care. Our exceptional ability to translate scientific discoveries into better treatments for patients is saving and improving the lives of countless numbers of patients.

“The AHSC’s strategic alliances with industry, academia and medical practitioners give London a competitive edge, and are making our region one of the best places in the world for healthcare.” 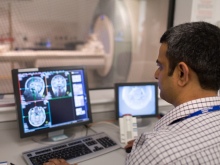 “Imperial College AHSC is rightly regarded as a model for others to follow. Our centre is also embedded within the local Academic Health Science Network, Imperial College Health Partners, which is helping to deliver innovations in medicine to several million people in northwest London.”

“This marks the culmination of many years of hard work by some of the country’s most talented health and medical professionals. Imperial College AHSC has confirmed its status as a global leader in health research, innovation and care.

"We look forward to large health, economic and social benefits in this country and far beyond.”

Turning discoveries from basic science into improvements in patient care is at the heart of what the AHSC does. These examples show how Imperial’s research has had impacts on clinical practice in the UK and internationally.

A clinical trial led by Professor Wendy Atkin showed that a screening programme for people aged 55 to 64 was effective at preventing bowel cancer. Eleven years after a single flexible sigmoidoscopy (FS) examination, the incidence of bowel cancer was reduced by a third and deaths from bowel cancer cut by 43 per cent compared with the group who were not screened. After the trial results were published, the UK National Screening Committee approved a bowel cancer screening programme using FS, aiming to achieve 30 per cent coverage by 2014, 60 per cent by 2015 and full coverage by 2016.

Around three in every 1,000 babies suffers from birth asphyxia, in which the brain suffers from a shortage of oxygen during the birth. In severe cases, 25–50 per cent of babies may die, and those who survive are at risk of disabilities like cerebral palsy, blindness and epilepsy. Following a sustained programme of laboratory and clinical research, Professor David Edwards and Professor Denis Azzopardi showed that a treatment that cools the brain by a few degrees, called hypothermic neural rescue, improves babies’ chances of surviving without brain injury by 50 per cent. This simple, low-cost treatment is now used across the world, and is being tested in developing countries where more babies suffer from birth asphyxia.

Chronic myeloid leukaemia is a rare cancer that affects white blood cells. Professor Jane Apperley’s group contributed to the development of treatments called tyrosine kinase inhibitors (TKI) that have changed the outlook from a fatal disorder to a chronic disease with normal life expectancy. They went on to show that rigorous monitoring using a test developed at Imperial can identify patients who will need different types of TKI to have a similar life expectancy. The group is now focussing on enabling people with CML to have a better quality of life by cutting down on hospital visits and giving them the chance to have children.

Liver cancer is the sixth most common cancer worldwide, and the main treatment is surgery to remove the tumour and surrounding tissue. The liver is full of blood vessels, so minimising blood loss is a serious concern. Professor Nagy Habib, working with researchers at Imperial’s Faculty of Engineering, developed devices that use radio frequency energy to clot blood inside the liver along the line that is to be cut. This allows the surgeon to take out the tumour with as little bleeding as possible. Clinical trials show that with this technique improves recovery, reduces the time patients spend in hospital and keeps patients out of intensive care.