3D printing used as a tool to explain theoretical physics Students may soon be able to reach out and touch some of the theoretical concepts they explore in physics classes, using 3D printing.

A group of undergraduate students and researchers from Imperial College London have demonstrated how complex theoretical physics can be transformed into a physical object using a commercially available 3D printer.

In just eight hours and at the cost of around 12 pounds, they created their own 8 cm3 object based on a mathematical model that described how forest fires can be started and how they eventually spread over time. Their work is published today in the journal European Physics Letters.

They have labelled the approach “Sculplexity” – standing for sculptures of complexity. They believe it could be used to produce works of art based on science, or transform the way that ideas and concepts are presented and discussed within the scientific community.

Co-author of the study Dr Tim Evans, a theoretical physicist at Imperial, said: “The work was inspired by a visit to the Victoria and Albert Museum in London where I came across the first ever 3D printed object the museum had acquired. 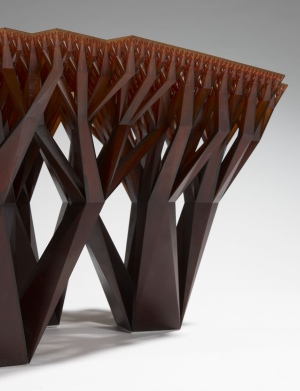 Dr Evans was inspired by this 3D printed table in the Victoria and Albert museum (credit: WertelOberfell)

“The object was a table inspired by the tree-like structures found in nature, which is an example of a branching process that is commonly encountered in complex systems in theoretical physics. This led me to thinking, what other processes familiar to physics could be turned into a 3D printed object?”

Complex systems are made up of many parts that interact on many time and length scales and which show coherent behaviour and certain patterns on a large scale. A living organism is the best example of a complex system, whereby the individual parts – in this case the molecular processes in a cell – interact with each other and contribute to much larger processes on a macroscopic scale.

The interactions at play in many complex systems can be mapped out onto a two-dimensional grid which is divided into identical squares, or “cells”. Each of the cells can exist in a certain state and evolve over time, a process governed by a certain set of rules.

In their study, the researchers used a forest fire as an example, in which each cell represented a tree which could either be alive, dead or burning. The exact state that each cell occupied over time depended on a set of rules, which took into account the cell’s proximity to other cells that may be burning, or what would happen if the cell was struck by lightning.

“The basic idea is simple. A 3D printer builds up its object in layers. So the height of the object can be thought of as time. Suppose you have a mathematical model which defines a flat, two-dimensional picture that evolves in time – typically this will be a grid with some squares full and some empty.

The resulting model that the researchers created was not without glitches. However, Dr Evans believes the experience has allowed them to identify the obstacles, formulate solutions and inspire the physics community to “get creative”.

“In our own group at Imperial we are trying to explain heart beat anomalies by looking at simple models for the behaviour of individual cells in heart muscle – it’s possible that this could be visualised using 3D printing. Most models that represent the spread of disease could also be visualised.

“There may be many other possible examples and we just hope our rather literal translation from theoretical model to 3D printer output stimulates others to get creative,” Dr Evans concluded.