Ancient fresh water lake on Mars could have sustained life A drill hole in an ancient mudstone on Mars

Scientists have found evidence that there was once an ancient lake on Mars that may have been able to support life.

It is exciting to think that billions of years ago, ancient microbial life may have existed in the lake’s calm waters, converting a rich array of elements into energy.

MSL team member and co-author of the paper

A team of researchers from NASA’s Mars Science Laboratory (MSL) Curiosity rover mission, which includes a researcher from Imperial College London, have analysed a set of sedimentary rock outcrops at a site named Yellowknife Bay in Gale Crater, near the Martian equator. These mudstones have revealed that Gale Crater, a 150 km wide impact basin with a mountain at its centre, sustained at least one lake around 3.6 billion years ago.

The scientists believe that the lake may have lasted for tens if not hundreds of thousands of years.

The team’s analysis showed that the lake was calm and likely had fresh water, containing key biological elements such as carbon, hydrogen, oxygen, nitrogen and sulphur. Such a lake would provide perfect conditions for simple microbial life such as chemolithoautotrophs to thrive in.

On Earth, chemolithoautotrophs are commonly found in caves and around hydrothermal vents. The microbes break down rocks and minerals for energy. 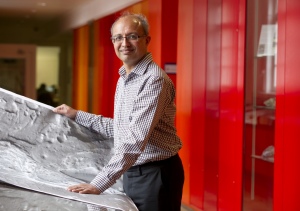 Mudstones generally form in calm conditions. They are created by very fine sediment grains settling layer-by-layer on each other, in still water.

Professor Sanjeev Gupta, a member of the MSL mission from the Department of Earth Science and Engineering at Imperial College London and a co-author on the papers, says: “It is important to note that we have not found signs of ancient life on Mars. What we have found is that Gale Crater was able to sustain a lake on its surface at least once in its ancient past that may have been favourable for microbial life, billions of years ago. This is a huge positive step for the exploration of Mars.

“It is exciting to think that billions of years ago, ancient microbial life may have existed in the lake’s calm waters, converting a rich array of elements into energy. The next phase of the mission, where we will be exploring more rocky outcrops on the crater’s surface, could hold the key whether life did exist on the red planet.”

In previous studies, Professor Gupta and the MSL team have found evidence of water on Mars’ surface in other rocks such as conglomerates. However, the new research provides the strongest evidence yet that Mars could have been habitable enough for life to take hold.

The team analysed the geology and chemistry of the mudstones by drilling into the rock using the MSL six-wheeled science laboratory, which is remotely operated by the MSL team from the Jet Propulsion Laboratory in Pasadena in the USA.

The next step will see the team using the rover to explore Gale Crater for further evidence of ancient lakes or other habitable environments in the thick pile of sedimentary rocks scattered across the crater’s surface.

The research is published today in the journal Science.