Stem cells from the blood of a non-smoker

Smokers are less able to repair damage to blood vessels because stem cells in their blood age more quickly, according to new research.

The findings shed light on why tobacco use is linked to a higher risk of heart and circulatory disease, which is the leading cause of death worldwide, killing over 7 million people in 2011 alone.

The study, published in Stem Cells, and funded by the Wellcome Trust, looked at stem cells called endothelial progenitor cells (EPCs), which circulate in the blood. These cells can develop into endothelial cells, which line our blood vessels. The role of EPCs is to repair damage to the vessels, which can otherwise lead to cardiovascular disease.

The study found that EPCs were dysfunctional in both smokers and in patients with a smoking-linked inflammatory lung disorder called chronic obstructive pulmonary disease (COPD). Their EPCs had aged prematurely and showed damage in their DNA. 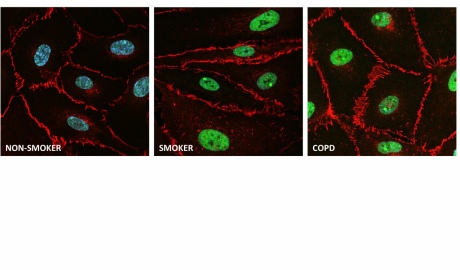 Endothelial progenitor cells from the three groups. The blue staining shows a healthy response to DNA damage. The green staining indicates where the double strand of DNA has been broken.

Dr Koralia Paschalaki, lead author of the study from the National Heart and Lung Institute (NHLI) at Imperial College London, said: “We found that the stem cells that repair blood vessels are effectively older in people who smoke than in non-smokers, and they don’t work as well. This is important because damage to blood vessels can lead to heart disease.”

The study was a collaboration between two sections within NHLI, supervised by Professor Peter Barnes and Dr Anna Randi. The Imperial researchers, working with colleagues at King’s College London and the University of Athens, reached their conclusions after studying blood samples from smokers and patients with COPD.

Both were found to have low levels of SIRT1, an enzyme that protects against damage in the blood vessels and inhibits ageing in cells. Most importantly, the researchers observed that the ageing process is reversible. For example, if the cells are treated with resveratrol, a compound found in red wine and known for its anti-ageing properties, the levels of the SIRT1 enzyme are restored, opening up possibilities for new therapies.

Ageing processes in different cells can have important negative and positive functions. “Ageing of cells causes dysfunction, but on the other hand it’s a very important tumour-suppressing mechanism,” Dr Paschalaki said. “It is our body’s way of eliminating defective cells. So we still need to understand more about the molecular mechanisms involved and explore the appropriate way to target them therapeutically.”

EPCs are becoming an invaluable resource for studying blood vessel formation and function at the molecular level, and may have uses in personalised and regenerative medicine in the future. For now, the researchers’ next step is to explore whether certain molecules might be able to prevent and reverse the accelerated ageing and dysfunction of EPCs and could potentially be used to treat cardiovascular disease.