Researchers have launched a detailed atlas with environment and health maps at a fine scale across England and Wales.

Produced by the UK Small Area Health Statistics Unit (SAHSU), part of the MRC-PHE Centre for Environment & Health based at Imperial College London, the open-access atlas allows researchers, policy makers and members of the public to study the geographical pattern of 14 diseases and conditions such as lung cancer, breast cancer, heart disease, leukaemia and low birth weight. Alongside this it provides maps of geographical variations of selected environmental agents such as air pollution, sunshine and pesticides.

This is the first time in the UK that researchers have produced these maps at such high spatial resolution. By inputting a postcode to the online version of the atlas, users can zoom into a neighbourhood (around 6,000 people) and toggle between the health and environment maps for that local area. Health maps provide an indication of the health risk for the area relative to the average for England and Wales but do not represent the risk for an individual living in that area. A companion print version, with more detailed interpretive text and statistics, is being published by Oxford University Press.

Simply comparing the health and environment maps will not enable people to conclude there is a causal link between a specific environmental agent and a health condition, but it can highlight areas for future research. For example, the atlas shows that skin cancer risk is greatest in southwest England even though sunshine duration is highest in southeast England. This suggests that despite a lower level of sunlight in the southwest people may be more exposed, which could trigger further research into behavioural differences between the areas to explain this variation.

This atlas is the first in the UK to adjust for both age and deprivation as well as making statistical allowance if numbers of cases are very small. These adjustments help users to explore the geographical patterns of health risk that aren’t just the result of ageing populations or poverty.

Looking across all health conditions there are 33 wards that show more consistent patterns of lower relative health risks compared to only eight at the higher end of health risk. Those areas that appear to have the lowest relative risk are in central London, North Norfolk, parts of Suffolk, and Brighton & Hove. The areas with the higher relative risk tend to be in the North West, parts of Yorkshire and South Wales.

Some conditions show a lot of geographical variation that can’t be explained by deprivation or ageing. Examples are lung cancer, skin cancer, liver cancer, chronic pulmonary disease (a combination of chronic bronchitis and emphysema) and mesothelioma (a cancer caused by exposure to asbestos).  In particular the risks for respiratory problems, such as lung cancer and chronic pulmonary disease are worse in urban areas.  Risks of heart disease mortality are predominantly higher in the north of the country. However, the relative risks of breast cancer, prostate cancer, leukaemia, brain cancer, still births and low birth weight are more similar across Wales and England. 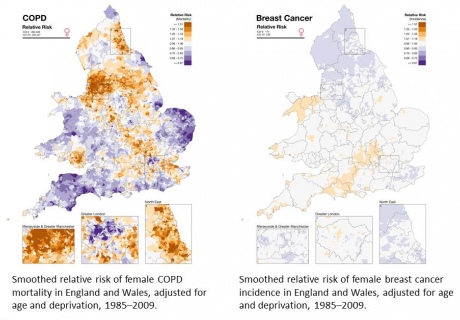 “The atlas is a fantastic tool for researchers, policy makers and the public,” said lead author Dr Anna Hansell from SAHSU in Imperial College London’s School of Public Health. “It is the first publication in the UK to amalgamate data at this level of resolution on health and environment. It connects people to health and environment at a neighbourhood level and provides resources to learn about these issues. It also allows us to identify the important questions that need answering about patterns of health and environment risk for future avenues of research."

The atlas uses data from the Office of National Statistics and cancer registries for 1985 to 2009.  For health data, the maps illustrate relative risk - the rates or number of cases for an area compared to the average for England and Wales - as a long-term average. The risks have been ‘smoothed’ to adjust for chance fluctuations that can occur when there are small numbers of cases especially for cancers such as leukaemia and brain cancer.

Alongside health risk maps, the online atlas provides a series of maps of four environmental agents: air pollution, agricultural pesticides, disinfection by-products in drinking water and sunshine duration.  As neighbourhood-level environmental data were not available for all years, most agents are represented by data from 2000 or 2001.

Together with the maps the research team have produced contextual information on known risk factors for health conditions and a summary of current knowledge about possible association of health effects with environmental exposures.

"Maps are a powerful way to visualise data but each map tells its own story and has its own background,” said Professor Paul Elliott, senior author and Director of SAHSU at Imperial College London. “We hope everyone who uses the atlas will have an informative and insightful experience but will also interpret the maps in the light of the additional information we provide including social and historical context.”

By providing such a wealth of information at a local level, the atlas is likely to provoke a range of questions. The online atlas provides a series of FAQs for the questions that may arise from users that has been developed through user testing organised by Sense About Science.

The work for the atlas was undertaken by the UK Small Area Health Statistics Unit (SAHSU) at Imperial College London. SAHSU is part of the MRC-PHE Centre for Environment and Health which is funded by the Medical Research Council and Public Health England.

The Environment and Health Atlas for England and Wales can be seen at http://www.envhealthatlas.co.uk/