The Blackett Laboratory, home of the Department of Physics, was designated an historic site by the European Physical Society (EPS) yesterday.

The prestigious recognition is bestowed by the EPS (a not-for-profit association of physicists) upon sites in Europe that hold national or international significance to physics and its history and was commemorated with the unveiling of a plaque by Imperial physicist Professor Tom Kibble.

The Blackett Lab, which has housed the Department of Physics since its completion in 1961, joins the National Physical Laboratory at Bushy Park as one of only two such recognised sites in the UK. It was selected by the EPS for its role as the home of pioneering advances in the fields of theoretical and experimental physics over the past five decades including in particle physics, quantum physics and ultrafast laser development.

The advances made at the Blackett Laboratory have impacted on all fields of physics, and the laboratory continues today to produce results at the highest level and to turn out exceptional young physicists.

The building was the site of Mohammed Abdus Salam’s work on the unification of the weak and electromagnetic forces for which he was awarded the Nobel Prize in 1979, as well as Professor Tom Kibble’s work which defined the mechanism by which gauge bosons acquire mass via the Higgs field. This research helped lead the way to the discovery of the Higgs Boson particle in 2012. More recently the Blackett Lab has been home to Sir John Pendry and his work (with David Smith and others) on the creation of meta-materials and his research invisibility cloaking and the theory of the perfect lens.

Professor Joanna Haigh, Head of the Department of Physics, said: “The Department is delighted and honoured that the Blackett Laboratory has been recognised by the European Physical Society for the advances to physics that have been made within its walls. We are proud of the significant contributions that our academics, past and present, have made to the field and this commemorative plaque is a testament to their achievements.” 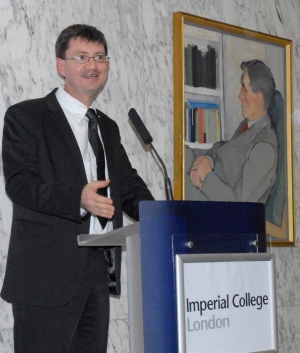 Professor John Dudley, President of the EPS, said: “The advances made at the Blackett Laboratory have impacted on all fields of physics, and the laboratory continues today to produce results at the highest level and to turn out exceptional young physicists.”

The occasion was marked with a lecture by Professor Antonino Zichichi, President of the World Federation of Scientists and former student of the lab’s namesake, Professor Patrick Blackett, a former Head of Department. Professor Zichichi spoke on Blackett’s life and work, from his contribution to the field of operational research during his time as a naval officer to his vital roles in the discovery of the subnuclear universe and in the promotion of scientific culture.

About the Blackett Lab

For more information on the history of the Blackett Building and the Department of Physics visit their website.