Patient tweets to NHS hospitals provide valuable insight into their experiences of care, according to new research.

The study, published in the journal BMJ Quality and Safety, looked at 200,000 tweets sent to NHS hospitals over one year. Around 11 per cent gave information about patients’ experiences, which could offer a route for hospitals to understand how well they are caring for their patients.

The researchers found that 75 of 166 NHS hospital trusts were on Twitter. On average, each hospital on Twitter received 2600 tweets a year.

Twitter provides a new route for the NHS to understand what patients experience in hospital,

More than 70 per cent of the tweets about patient experience were positive, with patients often describing how staff had treated them with care and compassion. For example:

At the [@named hospital] just had an operation on me foot. Outstanding care as usual, & the nurse has just made me a cracking cup of tea :-)

[@named hospital]Yes pls. Main concern now is the doctor overprescribing. We worked out the error but vulnerable patient might not.

Patients also used twitter to describe how clean the hospitals were, and the quality of the food. Some patients tweeted pictures of their hospital experience. One mother, concerned about the food on offer for her toddler, shared a picture. 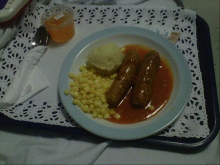 [@named hospital] Cannot believe I have been served this for my 18-month old. Tastes disgusting and hardly nutritional! [link to photo]

Dr Felix Greaves from Imperial College London’s School of Public Health and lead author on the study, said:  “Hospitals should be listening to what patients say on Twitter. It provides a new route for the NHS to understand what patients experience in hospital, and for hospitals to improve the care they provide.”

The researchers captured all the tweets sent to NHS hospitals on Twitter over a year, from April 2012 to 2013.  Some Trusts received far more messages than others. One hospital was sent more than 80,000 tweets whilst another hospital received none. The hospitals that received the most tweets were children’s hospitals and those providing specialist cancer care.

The research team used sentiment analysis to understand the tone of each tweet – whether it was positive, negative or neutral. They found no relationship between the sentiment of Tweets and the results of the traditional paper-based national patient survey, suggesting that Twitter might be less useful as a tool to make comparisons about hospital performance.

“Many of the tweets discussed other topics – such as fundraising or sending messages of support to patients in hospital – which mean there is a lot of noise in the data.” said Dr Greaves. “It is clear that some hospitals are engaging with their patients on Twitter, but others seem to be paying it little attention. Hospitals should be taking the conversations on Twitter seriously; the short human stories in each tweet can give hospitals different insights into their patients, compared with what we can learn through more traditional ‘big data’ analysis.”