Some of the UK and China's leading data scientists will team up at a new London lab thanks to a partnership between Imperial and Zhejiang University.

The announcement of the Imperial - Zhejiang University (ZJU) Joint Lab for Applied Data Science was made at a major ZJU-Imperial conference ‘Big Data: Healthy Citizens, Smart Cities’, held at ZJU’s campus in Hangzhou, China, over Friday 18 and Saturday 19 July 2014.

The news comes just one month after Premier Li Keqiang visited the UK to reinforce trade, research and educational ties between the UK and China.

Data is opening new doors and spurs a revolution that will transform every aspect of lives.

At the ZJU-Imperial event, globally renowned experts in science, engineering, medicine and business – from Imperial, a world top ten university, and ZJU, one of China’s leading institutions – are meeting to exchange ideas on the future of data science and its application.

Sir Keith O’Nions, President of Imperial College London, delivered the Qi Zhen lecture on ‘Globalisation and the 21st Century University’ during the conference. He said:

“Bringing together data scientists from two of the world’s great universities will spur creativity and innovation as we use our respective strengths to push scientific discovery forwards. 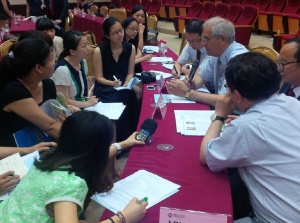 “In an increasingly data rich world, collaborations like this help the academic community to convert data assets into useful knowledge and valuable products.  Data scientists are making profound contributions to the development of new medicines, solutions to environmental challenges, and helping create better ways to live in smart cities. We look forward to working with ZJU to accelerate this process.”

“The ZJU Imperial Joint Lab for Applied Data Science is a highlight of collaborative progress between the two institutions since the establishment of our partnership in May 2013.

“Data is opening new doors and spurs a revolution that will transform every aspect of lives. In a world where data is everywhere with increasing volume, velocity and variety, collaboration enables us to leverage each other’s strength to make insightful discoveries. I believe the conference is a great opportunity to share expertise, but in a more important sense, to spark new ideas of using Big Data for the well-being of human society.”

Data as a common language

Professor Yike Guo, Director of the Data Science Institute at Imperial, where the joint ZJU lab will be based, said:

“Data is being produced at a relentless velocity and volume. Understanding and using this data could revolutionise scientific discovery.

“Data is fast becoming a common language, unifying key actors – from different disciplines, sectors and countries – throughout science and innovation.

“This latest addition to Imperial’s Data Science Institute will help make big data an ever more integral part of the scientific process.”

“It took scientists 10 years to process the human genome for the first time – now it can be done in a day. That shows how far we have come in our ability to manage large and complex sets of data, and how powerful the results can be.

"Collaboration is the bedrock of innovation, so it’s great to see one of London’s world-leading scientific institutions joining up with colleagues in China to address the challenges and opportunities of big data. I’ve no doubt that this work will lay the foundations for future breakthroughs that will advance knowledge and improve health worldwide.”

Highlights of the ZJU-Imperial big data conference include: The Applied Data Science Lab at Imperial College London will enable ZJU and Imperial academics to co-locate as they work to apply big data technologies to fields as diverse as neuroscience, bioengineering and meteorology – areas of common strength for both institutions.

ZJU will provide initial funding for the initiative, with additional support from the Chinese Ministry of Education to allow some of the country’s brightest PhD scholars to work at Imperial.

The Imperial-ZJU Lab will provide a focal point for shared areas of expertise in data science, as the two universities pursue additional research funding from industry and government in Europe and China.

The Lab forms part of Imperial’s Data Science Institute, the College’s new hub for translating big data expertise into solutions to some of the world’s toughest challenges.