Influenza researchers have collaborated with an illustrator to make a short animated film titled &apos;How to Catch Flu'.

The film is presented by a flu virus who gives a comical and slightly macabre account of flu’s history and its possible future. Sitting in an armchair, it informs viewers of its evolution over the years, its preferred victims and what can facilitate or stop its spread. The film then provides advice on how to avoid the flu and limit its impact.

‘How to catch flu’ was produced as part of the MOSAIC (Mechanisms of Severe Acute Influenza Consortium) project, which was launched in 2009 in the midst of the H1N1 (swine flu) pandemic. The project brought together an unprecedented group of 45 scientists to study patients who were hospitalised with influenza-like illness to help develop new treatments for flu. 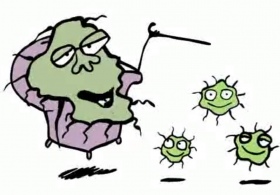 Professor Peter Openshaw, Lead Investigator on the MOSAIC project and Director of the Centre for Respiratory Infection at the National Heart and Lung Institute, Imperial College London said: “We wanted to think of ways to connect with the public, raise awareness and to make people think about how flu can be avoided. The makers of the film, Steven Appleby and Pete Bishop, came up with some fantastic ideas. We thought the most entertaining option was to invite the audience to think about what it would be like to be a flu virus.”

The title of the film ‘How to Catch Flu’ has a double meaning: depicting how we contract influenza, but also alluding to how we can capture the virus for research purposes. The findings from the MOSAIC project will help inform the improvement of vaccines and the development of treatments, but more analysis and research is needed to gain a fuller understanding of this highly infectious, devious and adaptable virus.

The MOSAIC study recruited 255 patients with flu-like illness from 11 hospitals in London and Liverpool, of which 172 had confirmed influenza. The researchers collected extensive clinical information on the patients and took multiple mucus and blood samples.

Director of the Centre for Respiratory Infection

For the first time in such a large group of patients, the researchers used a new technique to collect samples from different parts of the nose, developed by Dr Trevor Hansel from Imperial’s National Lung and Heart Institute. The project has collected over 8000 samples: an average of 31 samples per patient.

“One of the major outcomes of the project was identifying a gene called IFITM3 which is important in susceptibility to influenza,” said Professor Openshaw. “We have also gained a better understanding of how the virus changes over time, for example how the swine flu virus mutated to allow it to infect humans better. This is all information that will to help tackle future outbreaks.”

“MOSAIC has a wealth of detail that had not been collected before and we now have the challenge of fitting it together,” he added.  “Already the MOSAIC project has started to answer important questions about critical variations in the virus and the host that influence the severity. Our aim now is to narrow this down to practical biomarkers which can predict early in the disease whether someone will develop a severe illness or whether the symptoms will be mild.”

MOSAIC is the world’s most comprehensive study of the causes of severe pandemic influenza to date and there are already initiatives underway to continue its work. The EU-funded PREPARE (Platform foR European Preparedness Against (Re-)emerging Epidemics) project is establishing a framework for large-scale clinical research studies so that researchers can rapidly gather information when there is a new outbreak of any severe infectious disease. It will involve more than 600 hospitals and 600 GPs in countries across Europe. Professor Peter Openshaw and Professor Anita Simonds from National Heart and Lung Institute and Royal Brompton Hospital are involved in several ‘work packages’ of PREPARE, investigating severe forms of flu and the mechanisms that cause it.

The MOSAIC project and the film ‘How to Catch Flu’ were jointly funded by the Wellcome Trust and the Medical Research Council (MRC). The film was created by illustrator Steven Appleby and animator Pete Bishop. For more information on the MOSAIC project see //www1.imperial.ac.uk/mosaic/.