Obstructive sleep apnoea (OSA) is a condition where the walls of the throat relax and narrow during sleep, interrupting normal breathing and causing profound sleepiness. For people with moderate or severe OSA, doctors usually recommend using a continuous positive airway pressure (CPAP) device, which consists of a small pump that delivers pressurised air into the nose through a mask, stopping the throat from closing.

Previous studies have established the benefits of CPAP in middle-aged people with OSA, but until now there has been no research on whether the treatment is useful and cost-effective for older patients.

The new research found that CPAP reduces how sleepy patients feel in the daytime and reduces healthcare costs. The researchers say CPAP should be offered routinely to older patients with OSA, and more should be done to raise awareness of the condition.

The study, published today in Lancet Respiratory Medicine, involved 278 patients aged 65 or over at 14 NHS centres in the UK. It was led by researchers at Imperial College London and the Royal Infirmary of Edinburgh in collaboration with the Medical Research Council Clinical Trials Unit at UCL, and the Universities of Oxford and York. It was funded by the National Institute for Health Research Health Technology Assessment (NIHR HTA) Programme. 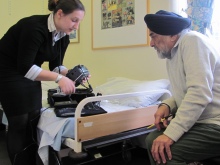 Around 20 per cent of the adult population experiences breathing problems during sleep. In four to five per cent of middle-aged people, these problems lead to sleepiness in the daytime, classified as obstructive sleep apnoea syndrome. The condition is thought to be more common in older people, but the true prevalence is unknown, in part because patients and their relatives may attribute their sleepiness to old age, or older people can compensate by napping. The disease is becoming more common because obesity is a major risk factor.

Professor Mary Morrell, co-principal investigator of the study from the National Heart and Lung Institute at Imperial College London, said: “Sleep apnoea can be hugely damaging to patients’ quality of life and increase their risk of road accidents, heart disease and other conditions. Lots of older people might benefit from this treatment. Many patients feel rejuvenated after using CPAP because they’re able to sleep much better and it may even improve their brain function.”

Patients with sleep apnoea sometimes stop breathing for 30 seconds or longer at night before they wake up and start breathing again. In these pauses, their blood oxygen levels fall.

“We think low oxygen levels at night might accelerate cognitive decline in old people, and studies have found that sleep apnoea causes changes in the grey matter in the brain. We’re currently researching whether treatment can prevent or reverse those changes,” said Professor Morrell.

Co-principal investigator Dr Renata Riha, Consultant and Honorary Reader at the Royal Infirmary of Edinburgh, added that sleep medicine spans many disciplines and comprises an important area of research which deserves support and greater recognition by funding bodies, universities and public policy makers. “Sleep disorders, such as sleep apnoea, impact on a wide variety of chronic conditions, potentially leading to their development or worsening them, including diabetes, heart attacks, strokes and possibly even cancer. Successful treatment diminishes this risk but we still have a great deal of work to do in the area,” she said.