Partnerships across geographic and disciplinary boundaries will be a top priority for Imperial's new President as she begins her tenure today.

Professor Alice P. Gast, one of the world’s most respected higher education and science leaders, joins Imperial, a world top ten university, after spending eight years as President of Lehigh University in the United States.

She succeeds Sir Keith O’Nions, who has led Imperial since 2010. Professor Gast thanked him for creating “a positive momentum” for Imperial’s exciting future.

Collaboration across geographic boundaries and academic disciplines is essential. Imperial has excelled at collaboration and will continue to do so

In 2010, Professor Gast became the United States Science Envoy for Central Asia and the Caucasus. She also serves as a director of Chevron Corporation, a trustee of the King Abdullah University of Science and Technology, and on the Academic Research Council of Singapore.

In a message to Imperial staff on her first day as President, Professor Gast said:

“Collaboration across geographic boundaries and academic disciplines is essential.  Imperial has excelled at collaboration and will continue to do so. Collaboration is also the path I will follow as Imperial’s President. It is our collective efforts that are required to maintain and advance Imperial’s excellence.” 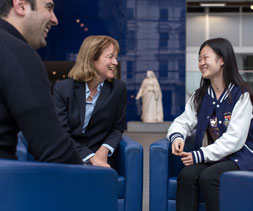 Professor Gast said that the complex grand challenges facing the world can be most effectively addressed in integrated international teams of the sort where Imperial students and academics thrive.

She said that meeting such challenges will require new environments, such as the “unprecedented opportunity” at Imperial West. This 25 acre research and innovation campus in west London will “catalyse our academic community by creating a new model for education, research, innovation and engagement,” said the new President.

Professor Gast’s priorities at Imperial include the development of Imperial West, expanding the College’s global reach, and securing a world-class student experience.

"We are absolutely delighted that Alice Gast has accepted our invitation to become the next President of Imperial College. She comes with a stellar reputation as an academic leader in the United States and we know that, building on the outstanding legacy of her predecessor, Sir Keith O’Nions, she will lead Imperial to further success, at a very exciting stage in its development."

As President of Lehigh University (2006-14), Professor Gast concluded an unprecedented $550m fundraising campaign, oversaw a 47% increase in the university’s estate, and improved integration between undergraduate and postgraduate teaching and research.

Professor Gast accepted the post at Imperial in January 2014. She is married to Bradley J. Askins, a computer consultant, and they have two children.