Known as ‘Reach Out CPD’, the web-based programme is championed by Imperial’s Professor of Science and Society Professor Lord Robert Winston, and will provide teachers with resources and ideas to support their teaching and engage primary school children across the UK in the wonder of primary science.

If you’re going to single out one of the most important jobs in our society it has to be teaching. We need to nurture, value and promote teachers

Reach Out CPD sees Imperial College London and Tigtag responding to the call made by government in December 2013 for better materials, resources and tools to help schools inspire and motivate students to reach the required standards.

According to a 2013 National Science Learning Centre report, only 5% of the UK’s primary school teachers hold a science degree. Access to appropriate training, guidance and resources is recognised as key to improving teachers’ confidence to give engaging and inspiring science lessons. However, the time commitment and cost of courses, which can be over £300 a day, are often barriers to teachers participating in science-specific professional development training, resulting in a variation in the amount of science CPD undertaken in schools.

Through a substantial investment by Imperial and Tigtag, the new Reach Out CPD online video and interactive resources for teachers are free and accessible to all 200,000 primary teachers in the UK. Covering all of the UK primary science curricula and available anytime and anywhere Reach Out CPD is designed to be tailored around teachers’ lesson planning. 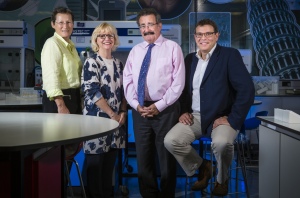 Reach Out project team from Imperial and Tigtag

Reach Out CPD champion Professor Lord Robert Winston said: “If you’re going to single out one of the most important jobs in our society it has to be teaching. We need to nurture, value and promote teachers. To give them the career professional development and support they need is so important. If you really want to change your society, you’ve got to invest in the youngest children. And if you’re really wanting to change your society and make it a better place, then primary school is the key opportunity.”

Through specialist films produced by Tigtag, teachers will learn about scientific concepts while gaining imaginative classroom ideas to inspire students and encourage them to engage with science. Introduced by Imperial College London academics, Reach Out CPD also features wide-ranging supporters of the programme, including Olympic athlete Katherine Grainger and experts representing the Royal Academy of Engineers and the Royal Observatory. The films can also be accessed by parents in a tailored area of the Reach Out CPD website, supporting them to teach children about science at home.

Professor Maggie Dallman, Associate Provost (Academic Partnerships), at Imperial, will mark the launch of Reach Out CPD on Monday 13 October by returning to her former primary school, Hayes Primary School, Bromley, to deliver hands-on science lessons to three classes of children based on the new Reach Out CPD resources. 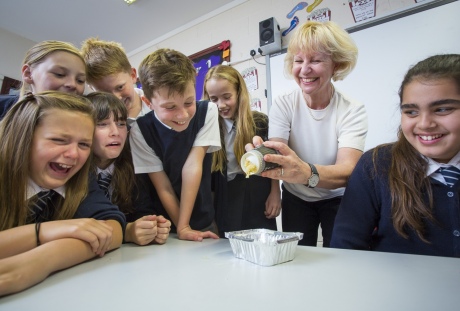 Professor Debra Humphris, Vice Provost (Education) at Imperial said: "Across Imperial our talented staff and students undertake a huge amount of outreach work with schools. We’ve traditionally done this with the secondary sector but there's evidence that we need to start at a much younger age to inspire children about science.

Across Imperial our talented staff and students undertake a huge amount of outreach work with schools. We’ve traditionally done this with the secondary sector but there's evidence that we need to start at a much younger age to inspire children about science

"We're thrilled to have partnered with Tigtag to develop new free materials to help primary teachers to bring the science curriculum to life. The joy of the resources being online is that they can be accessed anywhere and at anytime so, while we can't reach all teachers physically, we hope to be making an impact in primary schools across the UK."

Anthony Bouchier, CEO and founder of Tigtag said: “In this country we seem to think science is only for scientists. But anyone who wants to be productive in the knowledge economy must know how to analyse data, make judgments based on evidence and have other skills that a scientifically literate education provides. Those school systems that deliver high achievement in science around the world know this and prioritise science in primary school - Reach Out CPD helps our schools to do the same.”

Jonathan Legh-Smith, Head of Partnerships & Strategic Research and Education Engagement at BT, said: “I am delighted that Imperial is focussing attention on primary school science teaching. It’s critical to introduce children to science in their earliest years and to inspire them to keep making choices to study STEM subjects as they grow up. The STEM gap is currently affecting all industries and initiatives like these will ensure that we continue to see brilliant scientists and engineers contributing to the UK economy.” 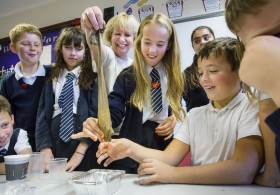 The first 20-minute Reach Out units to be released cover topics ranging from energy to the digestive system. Each includes videos and interactive elements that highlight the applications of science and encourage learning through peer discussions and reflective self-analysis. By early 2015 units covering all of the UK curricula will be available.

Teachers have already responded enthusiastically to the resources. Sam Sims, Headteacher of Meadows Primary School in Ipswich says: “Reach Out CPD is a fantastic way to get knowledge fast. I’ve just taught a lesson on rocks and was able to use some of the examples I saw in the films. I’m not a science specialist so it¹s great to have that information at your fingertips that you can use in the classroom that same day.” Professor Maggie Dallman, Associate Provost (Academic Partnerships) Designate says: "The ambition to inspire and awaken students to the wonders of science is what unites me, a university science professor, with teachers in primary schools.

Schools, like universities, should be places where curiosity is sparked and nurtured, and for teachers to engage their students they need high-quality resources and imaginative ideas.

That’s why my academic colleagues at Imperial are thrilled to be sharing their expertise with primary school teachers and supporting them to communicate the excitement of science in their classrooms.

At Imperial we have long been committed to stimulating engagement with science across society. Through Reach Out CPD we hope to provide a resource that will support primary teachers to do their work – if we can help give children scientific skills so they ask the right questions of society and make the right connections to solve problems, we will be making a very long term impact.”