The largest ever gathering of Saudi postgraduate students in the UK was held over the weekend.

The 8th Saudi Student Conference brought together more than 1,200 Saudi postgraduates to exchange ideas, present and debate in front of leading scholars from Imperial and other UK universities.

The student-led conference took place on 31 January and 1 February at the QEII Centre in London. Imperial served as this year’s host institution, supporting the development of the conference programme and its academic oversight.

The presentations were easily equal to what one might expect in a major international conference.

The event was sponsored by KAUST, the King Abdullah University of Science and Technology, a long-standing research collaborator with Imperial.

Saudi postgraduates underwent a rigorous peer review process, led by academics from Imperial and other UK institutions, for the opportunity to present at the conference. The students selected presented a total of 118 academic papers and 608 poster abstracts, and for many the event provided their first experience of showcasing their work at an academic conference.

During her opening address to the conference on Saturday, Professor Gast said: “To have assembled over 100 papers and over 600 posters shows the extraordinary range of talent in the Saudi UK student community. From artificial intelligence, to finance, to cultural studies, the topics covered at this conference consider some of the greatest challenges facing global society. I hope the conference will inspire you to continue your work and develop your insights and projects into innovations to benefit society.” 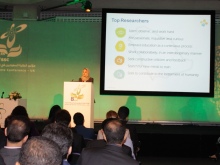 She told the students: “I applaud you. You are risk takers. You left the comfort of what you know, for the excitement and fulfilment that comes from exploring new intellectual and cultural horizons. I hope that your studies here enrich your lives and that you go on to do great things for your country and for humanity. There is no shortage of important problems in need of solutions. The world needs good minds like yours. Minds focused on furthering knowledge and expanding understanding.”

Dr Jean-Lou Chameau, President of KAUST, said:  “It is an honor for KAUST to sponsor the 8th Annual Saudi Students Conference in partnership with Imperial College. I congratulate the students for investing in their academic journey and look forward to their passion, talent and ideas contributing to new knowledge and solutions to important world problems—they are truly Saudi Arabia’s greatest asset.”

Imperial’s academic lead at the conference was Professor Neil Alford, Vice Dean in the Faculty of Engineering, who worked with Imperial and KAUST academic and student colleagues.

Professor Alford said: “The conference was a huge success. The scientific programme was sponsored by KAUST and co-organised between KAUST and Imperial.  My colleague Jean Frechet at KAUST and I were responsible for the scientific programme and we were delighted that the papers submitted were very high quality indeed and the posters on display also presented some very interesting results. The presentations were easily equal to what one might expect in a major international conference. The students did a fantastic job organising the whole thing and are to be congratulated.”

The conference had an invigorating effect on Imperial’s own Saudi student community, inspiring them to found a new student society, the Imperial Saudi Society. 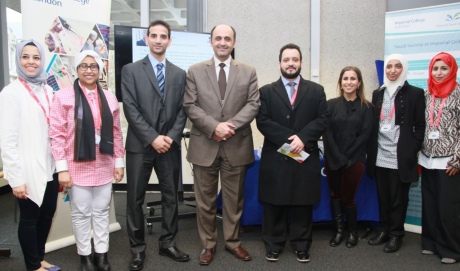 Saeed Alshihri, a PhD student in chemical engineering, is the Society’s founding president. Saeed said he had wanted to found a society for Saudi students since joining Imperial in 2012, but that the last few months of preparation for the Saudi Student Conference spurred him on.

Saeed said: “We want to support, integrate, promote and inspire Imperial’s Saudi students through this Society. We hope to encourage Saudi students to work more closely with each other, as well as to engage with the broader Imperial community. We are planning a programme that will include regular high-profile guest speakers, a Saudi Day for Science and Technology at the College, and new chances to explore Saudi heritage and culture.”