President sees "Bright lights on the horizon" for women at Imperial President Professor Alice Gast launched an exhibition to celebrate the achievements of female staff and students at Imperial past and present.

Over 200 members of staff, students and invited guests made their way to the College Main Entrance on Exhibition Road to attend the launch of the Women@Imperial exhibition.

Guests also enjoyed a series of interactive exhibits about research led by female scientists, a performance by Imperial’s all-female a cappella group the Imperielles, and speeches by senior staff and the President of the Imperial College Union.

Professor Gast, who is the first woman to lead Imperial in its 108 year history, said: “Diversity and mutual respect are essential to our mission to deliver academic excellence and societal impact. 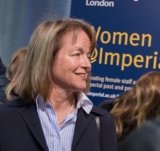 “There are bright lights on the horizon. Imperial’s women are very impressive. They contribute in many ways to College life. They are advancing research in ways that make a tremendous impact on the world. And we’re developing a new generation of women entrepreneurs who are a powerful force for the future.”

The exhibition includes sections on staff who have been instrumental in developing applications to the Athena Swan award scheme, the Academic Gender Strategy Committee, female fellows and notable female figures from the College’s past.

It has been developed as part of a wider College project to celebrate the work of women at the College and to raise awareness towards the support that College provides, which is set out in a new set of webpages. 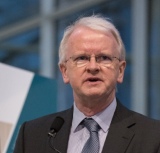 Imperial’s Provost, Professor James Stirling, paid tribute to some of the pioneering women from Imperial’s history, who feature in the exhibition and accompanying material from the archives.

He continued: “We have a number of initiatives in support of women, including the Imperial-Althea prize for entrepreneurial female students, the Elsie Widdowson fellowships for academic women returning to work after maternity leave, and a new play scheme announced just last week for the children and grandchildren of College staff and students during the Easter school holidays.

“We’re on a journey to address the historical underrepresentation of women in STEM subjects, and arguably that journey will not end until events like this are redundant.”

The Women@Imperial exhibition is part of a broader campaign to support the work of female staff and students, which includes the #ICsexism campaign run by Imperial College Union, a Google hangout panel discussion, events at the Imperial Festival and the annual Athena Lecture.

Provost’s Envoy on Gender Equality Professor Dot Griffiths is champion of the Women@Imperial project. She said: “This project is unusual as it has truly brought together academics, students and support staff from all walks of life at the College. I hope it lays the foundation for further culture change in the future.”

Scroll down for photos from the launch reception. 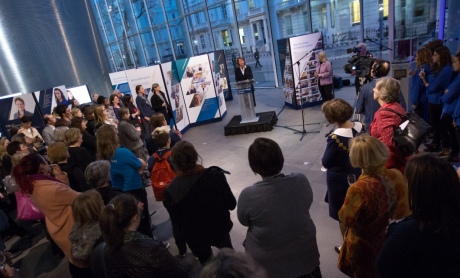 Guests – some of them men - packed out the College Main Entrance to hear Imperial’s President Professor Alice Gast launch the Women@Imperial exhibition. 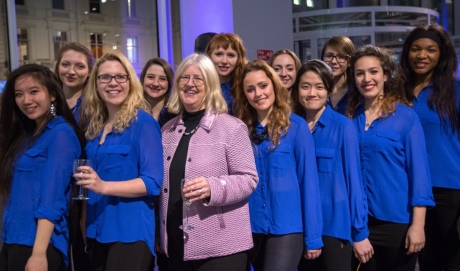 Professor Dorothy Griffiths didn’t get the memo from student a cappella group the Imperielles about wearing Imperial blue. 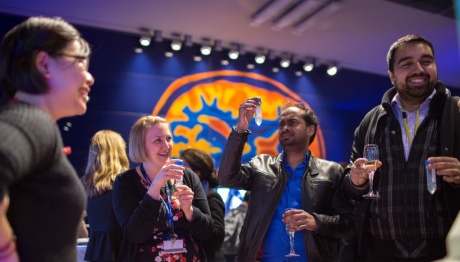 Researchers from Dr Christina Lo Celso’s research group in the Department of Life Sciences try to convince guests that they really have just extracted their own DNA. 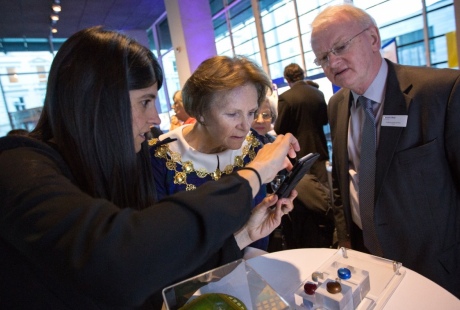 A closer look: Professor James Stirling and the Mayor of the Royal Borough of Kensington and Chelsea find out about Acupebble – wearable sensor technology developed by Dr Esther Rodriguez Villegas (left) from the Department of Electrical and Electronic Engineering for detecting illnesses by analysing the body’s sounds. 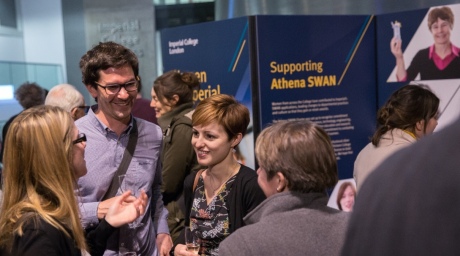 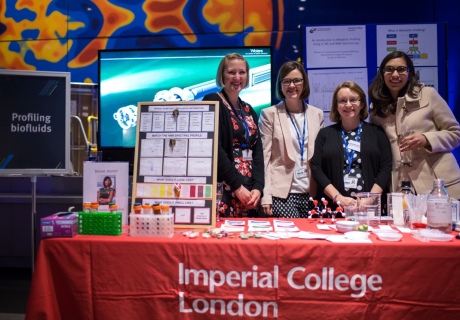 A formidible line up: Dr Elizabeth Want (second from right) and scientists from her group in the Department of Surgery and Cancer prepare to talk with guests about their research using mass spectrometry to analyse biological fluids and diagnose diseases earlier. 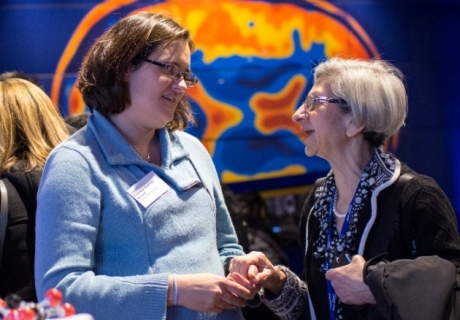 A touching moment: Professors Charlotte Williams (Chemistry) and Ten Feizi (Medicine) discuss Charlotte’s work on recycling waste carbon dioxide to make new polymers that can be used in products as diverse as furniture, cars and footwear.