Professor Higham, Imperial’s Vice Dean (Educational and Institutional Affairs) in the Faculty of Medicine, received the Nanyang Education Gold Award for her instrumental work in the founding of the Lee Kong Chian School of Medicine (LKCMedicine), a joint medical school established by Imperial and NTU.

I want to continue to make LKCMedicine the best it possibly can be – a true world leader.

Professor Higham has played a leading role in the collaboration between Imperial and NTU since negotiations commenced in 2009 and the award recognised her educational leadership at both institutions. Among her achievements she has spearheaded the development of LKCMedicine’s innovative medical degree programme. The third intake of students will begin their studies later this year.

The Gold Award, which Professor Higham received at a ceremony at NTU’s main campus in Singapore on 12 March, comes with a special grant of SGD $25,000 to support teaching-related activities.  She is one of the first two recipients of the award, established to recognise “superlative excellence in teaching”, which bestows on Professor Higham the title “Educator of the Year” at NTU. 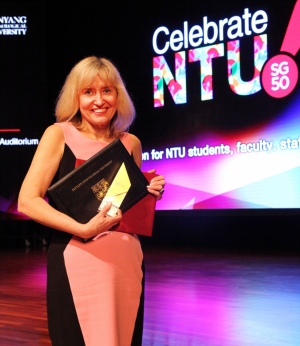 Speaking about the five winners of Nanyang Education Awards this week, Professor Kam Chan Hin, Senior Associate Provost (Undergraduate Education), described them as “the crème de la crème of NTU’s teaching talents”. He added, “they are all excellent and passionate teachers, and they have also distinguished themselves with other achievements beyond teaching.”

Commenting on her award, Professor Jenny Higham said: “I am absolutely delighted and very honoured to have this recognition from NTU.  My career for the past six years has been happily dominated by the creation of the Lee Kong Chian School of Medicine – something of which I am enormously proud. I want to continue to make LKCMedicine the best it possibly can be – a true world leader.”

The news comes as the College launches its Women@Imperial initiative, celebrating the achievements of the College’s women and to address gender inequalities.

The Nanyang Education Award adds to Professor Higham previous accolades including the Imperial College Medal in 2014, the President & Rector’s Medal for Outstanding Contribution to Teaching Excellence in 2013, and the honour of being named Mentor of the Year at the Women of the Future Awards in 2011.