A child who lost members of his family to Ebola in Guinea. Photo: UNMEER\Martine Perret

Ebola progresses more quickly and is more likely to be fatal for children under five, according to new research.

An international group of scientists led by Imperial College London and the World Health Organization analysed data on Ebola cases in children under 16 during the current outbreak in Guinea, Liberia and Sierra Leone, comparing them to cases in adults.

The results show that although the rate of infection is lower in children than adults, young children who get the disease have a lower chance of surviving it.

These findings show that Ebola affects young children quite differently to adults, and it’s especially important that we get them into treatment quickly.

The findings are published in the New England Journal of Medicine.

As of March 2015, nearly 4,000 children under 16 have been affected by Ebola in the current epidemic, around a fifth of all confirmed and probable cases. The proportion of cases made up by children has been gradually increasing over the course of the epidemic, but the explanation for this is unclear.

The incubation period – the time between becoming infected and showing symptoms – was 6.9 days in children under a year, compared with 9.8 days in children aged 10 to 15. Younger children also had shorter times from the onset of symptoms to hospitalisation and death.

There were also differences in the symptoms experienced by children. Children were more likely to have a fever when they first see a doctor, and less likely to have pain in the abdomen, chest, joints, or muscles; difficulty breathing or swallowing; or hiccups.

Professor Christl Donnelly, from the Medical Research Council Centre for Outbreak Analysis and Modelling at Imperial College London and a co-author of the study, said: “These findings show that Ebola affects young children quite differently to adults, and it’s especially important that we get them into treatment quickly. We also need to look at whether young children are getting treatment that’s appropriate for their age.”

Dr Chris Dye, head of WHO’s Ebola epidemiology team in Geneva and a co-author of the study, added: “The findings of this study emphasise that children suffering from Ebola need the highest quality medical care, but they leave open the question of why older children, aged 10-15 years, appear to be less vulnerable to Ebola than either infants or adults. This is a topic for future research.” 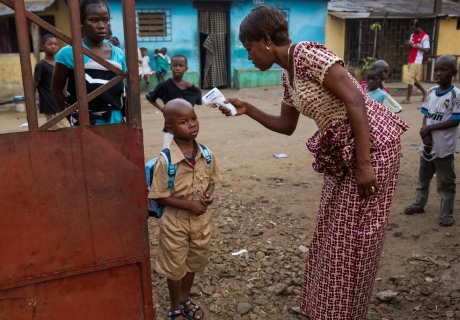 A child has his temperature taken as he returns to school in Guinea. Photo: UNMEER/Martine Perret

Dr Robert Fowler from the University of Toronto, who also co-authored the study, said: “The very youngest of children – neonates – appear to have the worst outcomes from Ebola. “We suspect that numerous factors are at play. First, the youngest of children are so dependent upon others for their care and wellbeing, and their caregivers may have also been unwell due to Ebola.

“Additionally, Ebola frequently causes a vomiting and diarrhoeal illness that leads to dehydration and electrolyte and metabolic abnormalities. This is not different from adults, but children seem to have less reserve, and get sick more quickly. In order to prevent children from getting dehydrated and developing ‘shock’, it is critical that they receive sufficient fluids – usually intravenously when they can no longer keep fluids down due to vomiting – and placing intravenous catheters in young children can be challenging.

“All of these challenges demand that we appreciate the high mortality in young children and evolve more dedicated and specialised means of caring for them in an Ebola outbreak – from nurses and doctors with expertise in paediatric care, with the support system in place in a treatment facility to provide medical and emotional care in a specialised manner.”