An Imperial student has won the first Althea-Imperial prize for her idea of a waterproof concrete additive to make buildings less vulnerable.

The prize is a £10,000 award presented to the most innovative female student entrepreneurs in science and technology at Imperial College London.

Charikleia Spathi (pictured above right), a PhD student from the Department of Civil & Environmental Engineering, was awarded the prize for her idea to create a product which draws on the use of a waste material to develop a super-hydrophobic powder. It is designed as a cost-effective waterproof solution for concrete buildings and critical infrastructure.

"This competition has demonstrated what an impressive pool of talented women we have at Imperial - people with great ideas and the ability to make a real difference to the world using their expertise in science, technology, engineering and medicine."

The prize forms part of the Althea-Imperial programme, an initiative launched by Imperial in partnership with the Althea Foundation, a social venture philanthropic organisation. The Foundation has invested $100,000 in a three-year initiative supporting innovative and entrepreneurial women students.

Commenting on her win, Spathi said: “I’m really excited to be chosen as the winner of this award. The Althea-Imperial programme has given me a fantastic opportunity to develop my entrepreneurial ideas and learn from the many speakers and mentors who’ve guided me along the journey.”

She beat four other teams who were shortlisted from 67 female undergraduate and postgraduate students who submitted their innovative business ideas for this year’s programme. The shortlisted candidates were invited to pitch their ideas to a panel of five international technology and investment experts.

Lesa Mitchell, Head Judge of the Althea-Imperial prize, from the organisational leadership company Networks for Scale, said: “The Althea-Imperial judges were delighted by the calibre and depth of innovations at the pitch competition and all the finalists presented both interesting technologies and supporting business ideas. Creating incentives for more young women to pursue entrepreneurship was a goal of the prize and that was clearly accomplished.”

Two runners up won £5,000 each to develop their projects. One is FungiAlert, an idea for a simple portable device that can alert farmers to the presence of plant disease in soil and water before it can infect crops, potentially yielding multi-billion dollar savings. The team behind it are Angela de Manzanos and Kerry O’Donnelly, both Chemistry PhD students.

The other runner up was Oorja, an idea by Clementine Chambon, a PhD student from Chemical Engineering. Oorja aims to build and install decentralised, easy to operate plants to co-produce clean electricity, household cooking gas and biochar from abundant rice husks, for off-grid villages in rural India, specifically in Uttar Pradesh where they would be managed by micro-entrepreneurs and women’s self-help groups. 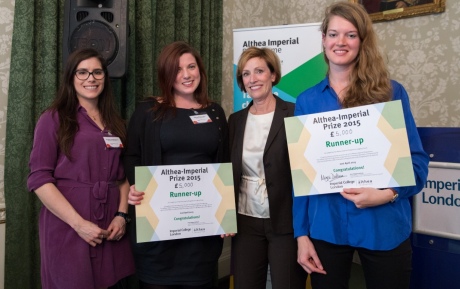 Professor Maggie Dallman, Associate Provost (Academic Partnerships) and champion of the Althea-Imperial programme said: “This competition has demonstrated what an impressive pool of talented women we have at Imperial -people with great ideas and the ability to make a real difference to the world using their expertise in science, technology, engineering and medicine. The programme ensures that we can effectively nurture this talent and encourage female students to become the business leaders of tomorrow. We are keen to attract new supporters to enable us to develop the programme next year and beyond.”

Diane Morgan, Associate Dean of Programmes, Imperial College Business School said: “Imperial is a great champion of innovation and supporting women’s aspirations in science and business. However, there is still a pressing need for more women entrepreneurs, which is why schemes such as the Althea-Imperial programme are great opportunities for encouraging students to apply their STEM learning to create a great business idea.”

Those who took part in the programme were celebrated at an evening event last night, attended by leading industry figures, Imperial staff and champions of women in business. Addressing the audience, Professor Alice Gast, President of Imperial College praised the Althea Foundation and said that she hoped the programme would inspire young women to “take more risks and have greater belief in their own incredible ideas”.

Also at the event was Alexsis de Raadt St. James, Founder and Chairman of The Althea Foundation. She said: “It has been my honour to work with Imperial College London, an institution that shares my passion for promoting innovation and entrepreneurship. What a success this inaugural year has been. With a high turnout among students and truly groundbreaking ideas, the Althea-Imperial Programme sets a precedent for excellence that I look forward to building on in years to come.

She continued: "At present, this programme is the only one of its kind in the UK. It is my ambition to replicate this competition in other UK universities in order to offer more students a similar platform to cultivate their entrepreneurial aspirations. I look forward to seeing the innovation and novel business models forged by next year’s competitors.”

If you are an Imperial student who would like to register your interest in in next year's Althea-Imperial programme, please fill in the form online