An illustration of the magnetosphere. Image: NASA

A space mission to measure how solar wind impacts the Earth's magnetosphere and affects space weather may soon get the go-ahead.

The SMILE (Solar Wind Magnetosphere Ionosphere Link Explorer) space mission, which is jointly led by UCL and the Chinese National Space Science Center and includes researchers from Imperial College London, will enter the initial study phase this summer. The study phase will be conducted by the European Space Agency (ESA) and the Chinese Academy of Sciences (CAS).

SMILE aims to understand how the Sun controls the Earth’s magnetic environment and space weather. If the initial studies are successful, the mission could be given approval in November 2015, with the launch expected at the end of 2021.

Understanding how the magnetosphere works is crucial for forecasting ‘space weather’ which can affect human activity and technology both in space and on the ground.

If launched, SMILE will monitor the solar wind, the stream of plasma continuously released from the Sun, and its effects on Earth. The project will last for three years and will help scientists understand the chain of events leading to the disruption of satellites, power grids and radio communications. The information collected on the mission could be used to predict and mitigate the impact of future solar storms that occur when solar flares or coronal mass ejections release more material from the surface of the Sun.

SMILE differs from previous missions looking at space weather as it will study what happens globally in the Earth’s magnetosphere, as well as the ionosphere and aurora which are closer to Earth. This will provide more detailed information which will hopefully enable scientists to reach a complete understanding of how the Sun influences events on Earth by interacting with its magnetic environment.

Collaborator Dr Jonathan Eastwood from the Department of Physics at Imperial said: “The goal of SMILE is to take the first pictures and movies of the Earth’s magnetosphere: the protective ‘bubble’ that the Earth’s magnetic field forms around us in space. Understanding how the magnetosphere works is crucial for forecasting ‘space weather’ which can affect human activity and technology both in space and on the ground.” 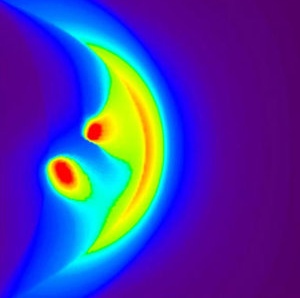 The magnetosphere is invisible to the naked eye, and scientists have traditionally used satellites to make local measurements of different regions and build up a global picture. However, in the last few years it has been discovered that the magnetosphere emits X-rays, which can be used to take a more comprehensive picture, which SMILE will take advantage of. “Getting a global view for the first time in this way will transform our understanding of how the magnetosphere works,” added Dr Eastwood.

The team will study how the charged particles in the solar wind interact with Earth’s neutral atoms and molecules using a soft X-ray imager (detecting X-rays with lower energies). Simultaneously, a UV imager will observe and measure the properties of the Northern aurora, while a light ion analyser and a magnetometer will monitor the solar wind conditions.

Project co-lead, Professor Graziella Branduardi-Raymont from UCL said: “SMILE will investigate the Sun’s interaction with the Earth’s magnetic environment in a unique manner, never attempted before: using the novel approach of imaging in X-ray, whilst measuring the UV aurora and the properties of the solar wind at the same time. SMILE will give us the opportunity to understand the processes from beginning to end and predict the effects of space weather events in a way unmatched so far.”

The mission is a joint endeavour of European, Chinese and Canadian scientists and engineers, with science support from the USA. Imperial College London collaborate with Chinese colleagues to implement the magnetometer, and the auroral UV Imager will be led by the University of Calgary, Canada. The University of Leicester lead the development of the soft X-ray imager and UCL MSSL that of the light ion-analyser, which measures the properties of the solar wind.