The Institute of Global Health Innovation (IGHI) held their 6th monthly Non-Communicable Disease (NCD) Forum on 16th July at St Mary’s Hospital in Paddington. Our monthly NCD forum diffuses and discusses current innovations in the treatment & prevention of NCDs in the developing world, the world’s number one killer.

July’s focus was on assessing nutrition in low-income settings and how variables such as variant lifestyles can affect diet. 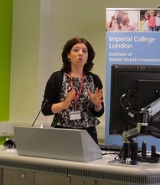 The first presenter for the forum was Dr. Vanessa Garcia Larsen, who talked about standardising dietary instruments to assess usual intake of individuals in lower income countries. She described the adaptation of the Ga2len (Global Allergy and Asthma Network of Excellence) Food Frequency Questionnaire (FFQ), which was developed and piloted in in European adults, and is being used in low income countries. The talk was centered on the issues around harmonising nutritional data at food and nutrient level, and the advantages of using a food classification system that facilitates international comparisons were illustrated. Their use can be particularly beneficial to investigate the association between non-communicable diseases and diet and related lifestyle risk factors. The issue of lack or small Food Composition Tables in low income countries was highlighted, and alternative reference methods to estimate intake were discussed.

Considering the wide range of languages and demographics these surveys wish to cover across the European union, there are most definitely many obstacles to take into consideration. Firstly, worldwide surveys are not standardised in any way. This means there can be problems in translation, adaptation, as well socio-economic & cultural limitations. 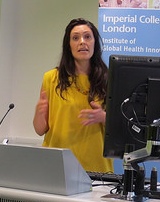 The next speaker at the forum was Dr Elisabetta Aurino with the focus of adolescent diets. The study compared the diets of two cohorts of children when they were aged 12 years old in 2006 and 2013 respectively in Ethiopia, India, Peru and Vietnam. The cross-cohort focus is able to shed light on what a 12-year-old child would typically eat in a normal day at the time of the administration of the survey, and to analyse how adolescents’ dietary behaviours in Low- and Middle-Income countries are rapidly shifting during a period characterised by sustained economic growth.

The results of the study show that, overall, diet quality is improving, particularly in Ethiopia and Peru, although consumption of different food groups is driving these changes, depending on each country’s stage in the “nutrition transition”.  For instance, while in Ethiopia diets are moving towards increased consumption of legumes and vegetables, in the other three countries adolescents are increasingly consuming animal-source proteins. At the same time, however, consumption of sugar is also increasing fast, particularly in rural areas of Ethiopia and Vietnam, with long-term implications for public health. 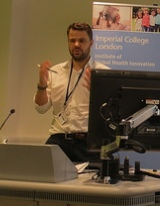 Partnership for Child Development (PCD)’s Francis Peel presentation focused on government efforts to tackle child malnutrition by strengthening school feeding programmes. The World Health Organization estimates that 42 million infants and young children under 5 are overweight or obese in 2013. At the same time, in low and middle income countries, over a fifth of children under five are affected by stunting due to poor diets.  Often the same children are suffering from the double burden of malnutrition resulting in stunting due to poor diets followed by a higher propensity for obesity later in life. To help governments to tackle this issue, PCD have developed an innovative programme to improve the nutritional content of school meals. The School Meals Planner uses an online menu planner to enable programme administrators to create nutritionally balanced school meals using local available ingredients. By using easy to understand gingerbread children graphics, the planner shows how by adding together different ingredients school meals can be used to challenge common dietary issues such as anemia, vitamin A deficiency and under-nutrition. The planner also includes local market pricing so implementators can develop fully costed school meals.  The planner works in conjunction with a community health sensitization campaign and caterer training programme. Having been successfully trialed and adopted by the Ghanaian government, PCD are looking to adapt the School Meal Planner to support school feeding programmes in other low and middle income countries.  To find out more visit www.hgsf-global.org

The event concluded with a panel discussion and Q & A session with all four speakers at the event.

View the photos of the event on our Flickr pages here.