A project to develop technology that could improve outcomes for people with kidney disease received a boost, following a &pound;1 million grant.

More than 2.5 million people worldwide have kidney conditions that require their blood to be routinely filtered by a dialysis machine. Most patients undergo a surgical procedure to prepare their veins for coping with the filtration process. This involves a surgeon creating a connection in the arm, called a fistula, between an artery and a vein, which is then connected to a dialysis machine. Although they are the gold standard in medical care, fistulas are unreliable, often blocking up and requiring repeated costly repair operations. In the US alone, $US 4.6 billion is spent annually to treat failing fistulas. 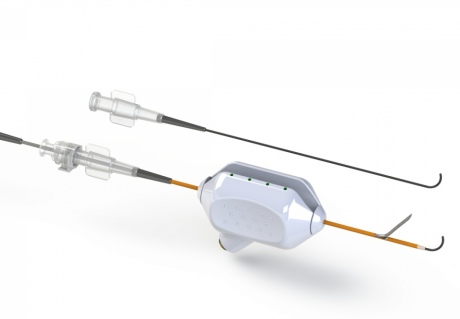 ePATH system is more intuitive and less invasive for patients

Now researchers from Imperial College London are developing the first minimally invasive procedure that uses a synthetic tube, called a stent graft, to form the fistula for dialysis. The team have also developed the prototype technology for inserting the stent graft between a patient’s artery and vein with precision and accuracy.

The device is called an Electronic Percutaneous Anastomosis Technology for Haemodialysis or ePATH. The researchers have received the £1 million funding from the NHS National Institute for Health Research to further develop the system and take it through patient trials.

The ePATH system will help some patients with kidney failure to avoid open surgery before beginning dialysis treatment. This is because the ePATH catheter system creates a vascular access site in a minimally invasive manner. This would mean less trauma for patients, leading to faster recovery times, and them being able to use dialysis machines sooner.

The device enables a stent to be deployed inside the arm

The ePATH system works by enabling surgeons to insert the catheters into the vein and artery through tiny needle-sized punctures in the skin, instead of opening up the arm. The surgeon would guide two catheters through to the artery and vein to the appropriate site in the arm, where an electronic alignment system is activated, manoeuvring the catheters so that they are properly lined up. A small needle would then cross from one catheter to other, effectively creating a channel between the two. A guide wire would then be passed through the needle and another catheter inserted. This final catheter deploys the stent graft, which remains inside the patient’s arm to form the connection between the vein and artery.

The underpinning research for this technology was carried out at Imperial in 2014 by Sorin Popa, while doing his MRes in Medical Device Design and Entrepreneurship, in the Department of Bioengineering at Imperial. His research was co-supervised by Dr Robert Dickinson and Professor James Moore Jnr, who are both from the Department of Bioengineering. Mr Jeremy Crane who is a consultant vascular surgeon at Hammersmith Hospital was Popa’s clinical supervisor.Popa is now a visiting researcher at Imperial and together with Dr Robert Dickinson from the Department of Bioengineering, they formed the spinout company Stent Tek in October 2014 to further develop the technology and bring it to the market. The next steps of the research will be carried out by Popa and Dr Dickinson at the College in conjunction with Imperial College Healthcare NHS Trust.

Popa said: “There is a real and growing problem with patients around the world who are having repeated operations to repair their failing fistulas. A major challenge is getting new technologies like ePATH to patients to improve their treatments. Imperial offers one of the only master’s courses in Europe that gives researchers like me a solid grounding in business planning. It has helped to lay the foundations for Stent Tek - a company that that is developing a technology that could reduce the impact of treatments on patients who are preparing for dialysis and reduce costs for healthcare systems worldwide.”

Now that the team have a fully functioning ePATH prototype they are planning to move to the next phase and start in-vivo trials in 2016. In early 2018, they aim to carry out clinical trials with patients. Following this stage the team expect to get the technology approved for market release in Europe and the US and into the European market by late 2018

In the future the team predict that their technology could have other applications including improving coronary bypass procedures in patients with heart conditions and opening up arteries that are blocked.

This research is also supported by the Medtech Campus, the Essex Innovation Programme, the Institute of Physics and Engineering in Medicine and Innovate UK.

In the USA the device market in technologies for the vascular system is experiencing rapid growth and is expected to reach $US 7.1 billion per year by 2018.

The market in the US, France, Germany and the UK for vascular access technologies is conservatively estimated at around $US 550 million and $1.08 billion worldwide.