The US Defense Secretary heard about joint UK and US initiatives in innovation during a visit to Imperial last week.

In the darkest days of WW2, Henry Tizard led pioneering technology that helped win that war, founding a scientific partnership between London and Washington

During his visit, Dr Carter learnt how Imperial research is helping to tackle key defence challenges faced by both countries.

One such challenge is the devastating effect of improvised explosive devices, or IEDs, a major cause of death and limb loss to UK and US troops in Afghanistan and Iraq.

Dr Carter and Mr Fallon began their visit with tour of the Royal British Legion Centre for Blast Injury Studies, where Professor Anthony Bull and Surgeon Rear Admiral Alasdair Walker explained how Imperial research is helping to reduce the risk and impact of limb loss in conflict zones.

Research postgraduate and Royal Air Force surgeon Claire Webster presented her PhD project into pelvic trauma sustained from blasts – injuries rarely seen in the civilian world and which often lead to loss of life due to the difficulties involved in treating them in the field. Her research aims to better understand how these injuries are caused so as to find ways of protecting troops. 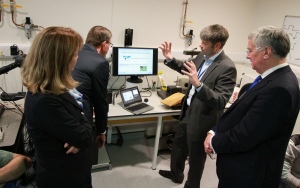 Dr Carter hailed the research as “amazing and important work”.

Dr Carter also visited the Bio-inspired Systems Laboratory, where Professor Holger Krapp explained how their research into the flight behaviour of insects is helping to inspire a new generation of autonomous flying robots.

Dr Carter’s visit to Imperial comes at the end of a day-long visit to the UK, hosted by Mr Fallon. 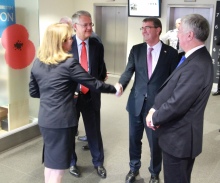 Speaking at a press conference at Lancaster House earlier in the day, Mr Fallon made reference to former Imperial Rector, Sir Henry Tizard. He said: “75 years ago, the scientific mission led in the darkest days of the war by Henry Tizard led onto the pioneering technology that helped win that world war, and founded between London and Washington a scientific partnership that continues to flourish today”

“Our nations currently cooperate on a range of innovative research projects from insect-inspired micro-UAVs to quantum clocks.  Some of that effort is concentrated in Imperial College London, Tizard’s alma mater, which we will both be visiting later today.”

Earlier in the day, Mr Fallon also announced £70 million of funding for a new Government drive on innovation and technology in Defence.

Mr Fallon said: “Together these investments will ensure that we are able to plan, develop, and deliver genuinely cutting edge capability to our Armed Forces.”