Our graduating class of 2015 receive Prizes from the Department. Osman Zubair recieved the Governor's Prize for being an outstanding student in the final year of his degree (BEng EEE).

Outstanding Students Celebrated at the Department of Electrical and Electronic Engineering's Prize Giving 2015.

Outstanding Students Celebrated at the Department of Electrical and Electronic Engineering’s Prize Giving 2015.

Our graduating class of 150 students received their degrees at Imperial College’s 2015 Commemoration Day ceremonies at the Royal Albert Hall on Monday.  At the Ceremony Osman Zubair, Weiyang Toh, Wen Ng and Weng Lio were presented with Governor’s Prizes for being the outstanding student in the final year of their degrees (BEng, MEng EEE and BEng, MENg EIE).

There was a departmental Prize Giving ceremony earlier in the day where families, new graduates and staff celebrated the achievements of our outstandingly bright cohort. Professor Eric Yeatman, Head of Department, and Dr Kristel Fobelets, Director of Undergraduate Studies, presented 21 prizes to graduates and seven prizes to continuing undergraduates.  The Head of Department’s Prize for Outstanding Contribution to the Department went to Lillan Agerup in recognition of her work as Chair of the Department’s Student Society, EESoc, in her final year. 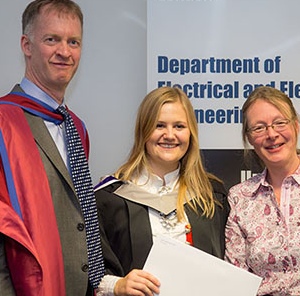 Lillan Agerup receiving her Prize for Outstanding Contribution to the Department from Professor Eric Yeatman and Dr Kristel Fobelets. 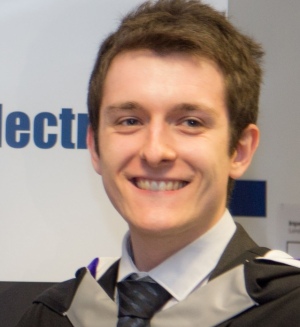 There were many other prizes celebrating various achievements of our students (view the full list of Prize Winners).  Congratulations to all our students. We wish the best of luck to those who have graduated and look forward to keeping in contact with them in the future