Is the world ready for digital money? Experts debate the issues If benefits of digital currencies are to be shared internationally, major cultural barriers need to be overcome, say industry leaders.

These were some of the findings at the fourth digital money symposium to be hosted by global bank Citi and Imperial College London. The event marked the release of a report which reveals the current state of digital money adoption across the world, highlighting a number of areas including the move from cash to credit and debit cards and other non-paper based mechanisms.

We are now entering the advent of electronic money, which is likely to have the greatest social and economic impact on the world.

Around 200 leading figures from the worlds of finance, business and technology gathered for a  series of lively panel discussions and guest speeches on topics from how to reduce fraud and cybercrime to the factors that influence young people’s spending habits.

Welcoming guests to the event, Naveed Sultan, Global Head of Treasury and Trade Solutions at Citi outlined the huge strides that have been made in digital currencies over the past four years, and the evolving commercial, social and economic impact around the world. He said: “If we look at the past 1,000 years, many different forms of money have revolutionised society and we are now entering the advent of electronic money, which is likely to have the greatest social and economic impact on the world.” 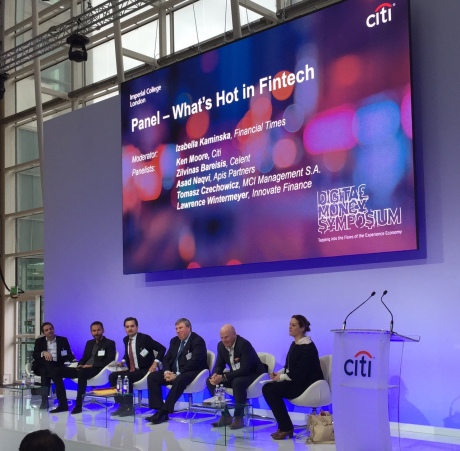 INNOVATIONS WITH A SOCIAL IMPACT

In her keynote speech, entrepreneur Carol Realini outlined how advances in communications have influenced the ease with which people interact with their money. She looked at how more innovative financial services, such as mobile banking, can help deprived people without bank accounts around the world. In the next five years, she predicted that digital money would have a greater impact on the whole of society, as more than 3 billion people are brought online for the first time.

Whether it is geographical, social or commercial – there are multiple lenses through which people can explore digital money and its drivers of adoption, according to a talk from Sandeep Dave. He is part of Citi’s Global Digital Strategy team and one of the authors of the digital money report.

The report reveals how the roles of culture and differences of human behaviour are increasingly important. It also emphasizes how a number of developing countries are beginning to make progress and develop the necessary infrastructure, but then reach an “adoption plateau”, at which point even the right structures cannot overcome cultural barriers.

He compared the cultural resistance surrounding digital currency to people’s initial reaction to the advent of the telephone and television. 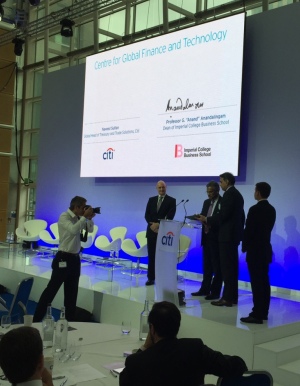 Professor G. 'Anand' Anandalingam announces the new Centre for Global Finance and Technology at the symposium

Introducing the new centre, Professor Anandalingam said: “As you know the motto of our business school is Intelligent Business. Digital Money is exactly that: intelligent business. It has been really great working with Citi on the digital money research and the foundation the work has laid out is for something really exciting that I’m pleased to share with you today.” The Centre will be based at the Business School and will bring together leading academics to investigate the impact of technology on finance, business and society.

He continued: “Last year, UK fintech companies secured record funding of well over 500 million pounds. Also, last year the government announced a series of ambitious measures to make UK and London the leading centre of global fintech. At the Business School we recognize that to become the leading centre of global fintech you need both intelligence and business acumen. The new Centre will help bring these elements together.”

Professor Anandalingam was later joined by Naveed Sultan to sign the partnership for the new Centre, in the presence of the new Director for the Centre, Professor Andrei Kirilenko.