Cost of diabetes hits 825 billion dollars a year, according to new study Diabetes map of the world

The global cost of diabetes is now 825 billion dollars per year, according to the largest ever study of diabetes levels across the world.

The research, which was led by scientists from Imperial College London, and involved Harvard T.H. Chan School of Public Health, the World Health Organization and nearly 500 researchers across the globe, incorporated data from 4.4 million adults in most of the world’s countries. The research team has also created interactive maps and other visuals that show the data for each country, and how they compare to each other - available here.

The study, published in the journal The Lancet, compared diabetes levels among adult men and women from 1980 to 2014. Diabetes results in a person being unable to regulate levels of sugar in their blood, and increases the risk of heart and kidney disease, vision loss, and amputations.

The study follows previous work by the same Wellcome Trust-funded team, which studied global obesity levels, and was published in The Lancet last week.

The data published today also reveals the age-adjusted levels of diabetes in 2014 were lowest in some countries in northwestern Europe, where around 4% of women and 6% of men have diabetes. The prevalence of diabetes was highest in Polynesia and Micronesia, where more than one in five adults has the condition. Overall, low- and middle-income countries had the largest rise in diabetes levels over the 34-year period.

The team also calculated the annual cost of diabetes – which included the cost of treating and managing the disease and its complications, such as limb amputations. This was calculated in International Dollars. The global cost was 825 billion dollars per year, with the largest cost to individual countries being in China ($170 billion), the USA ($105 billion) and India ($73 billion). The authors add that the calculation did not include work days lost due to diabetes, which would make the costs far greater if incorporated.

•    Diabetes has increased most dramatically in Pacific island nations and in the Middle East and North Africa region, which now have the highest diabetes levels in the world. In Polynesia and Micronesia, where prevalence is highest, more than one in five adults have diabetes. In Nauru and American Samoa, the number is nearly one in every three men and women.

•    Among high-income countries, the rise in diabetes was relatively small in western Europe, especially among women. Diabetes was lowest in Switzerland, Austria, Denmark, Belgium, and the Netherlands.

•    One half of the 422 million adults with diabetes in 2014 lived in five countries: China, India, USA, Brazil and Indonesia.

•    If current trends continue, over 700 million adults worldwide would be affected with diabetes by 2025.

The study did not differentiate between type one and type two diabetes, as this wasn’t included in most of the raw data. At least 85-90% of diabetes cases are type two. 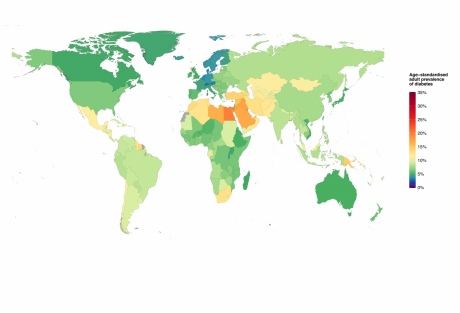 Global diabetes prevalence among women in 2014 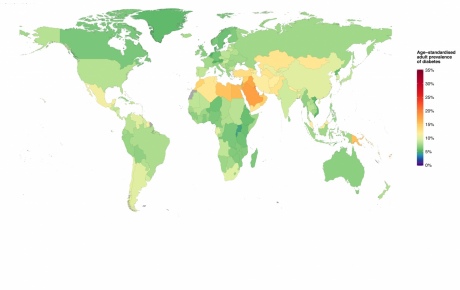 Global diabetes prevalence among men in 2014

Professor Majid Ezzati, senior author of the study, from the School of Public Health at Imperial College London, said: “This is the first time we have had such a complete global picture about diabetes – and the data reveals the disease has reached levels that can bankrupt some countries’ health systems. The enormous cost of this disease – to both governments and individuals – could otherwise go towards life essentials such as food and education.”

He added that, until we find effective ways of addressing the global obesity epidemic, focusing on individuals who are at high risk of the condition is key to tackling the diabetes crisis.

“We need financially accessible and effective health systems that can highlight those at high risk of diabetes or at pre-diabetes stage. Healthcare staff can then deliver medication and lifestyle advice to delay or even prevent the onset of the condition, as has been done in some countries in western Europe”

Professor Goodarz Danaei, co-lead author of the study from Harvard T.H. Chan School of Public Health said: “The most important risk factor for diabetes is obesity. Yet global obesity levels are soaring out of control.”

Professor Danaei also added that genetics and foetal and early life conditions may play a role in why some countries seem to have much higher rates of diabetes: “There is increasing evidence that the interaction of genes and the environment plays a role in diabetes. For example, certain genotypes may increase the risk of diabetes especially in people with unhealthy lifestyles. In addition, inadequate nutrition during pregnancy and in early life may increase the risk of diabetes later in life. Therefore, long-term diabetes prevention should address nutrition in every stage of life.”