When fish evolve the ability to give birth to live young rather than laying eggs, an explosion of new fish species follows, according to a new study.

Most fish lay eggs, but some species have evolved the ability to give birth to live young, a strategy known as viviparity. By analysing the family tree of the Cyprinodontiformes group of fish, which includes many aquarium species such as guppies, mollies and killifish, researchers discovered that the evolution of viviparity led to a rash of new species.

The research team, led by scientists from Imperial, believe viviparity is beneficial because it allows pregnant fish to travel with their young and find new areas to colonise. Once settled in a new area, away from others of the same species, these fish pioneers can become separate species of their own.

Any rise in the number of new species must be balanced against losses of species by extinction. The team found that the advantage of viviparity outstripped losses by extinction, leading to the bursts in diversity.

Reproductive strategies like viviparity can evolve separately in different species of fish. In the group studied, viviparity had evolved three separate times. Two of these led to explosions in diversity while the third did not. The results are published today in the journal Nature Communications.

The team were surprised to find that a second birth strategy they investigated did not fare so well. Some fish in the same group have evolved a strategy known as annualism – an annual life cycle. Annualism is when plants and animals only reproduce during one year, when the environment is right for their young to have the best chance of survival, but after which the parents die. 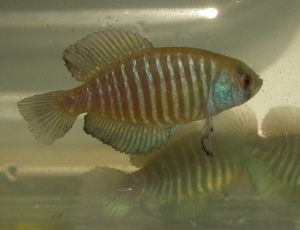 Some species of killifish have evolved to take advantage of seasonal ponds, laying their eggs in the wet season. When the ponds dry out, the eggs remain dormant until the rains return and they hatch. The researchers thought this would lead to many new species as it allows killifish to find new areas to colonise that are separated from other fish of the same species.

However, the evolution of annualism was not followed by a surge in diversification as expected. “Annualism in seasonal ponds probably does lead to the creation of new species, but this is likely to be balanced by extinctions in this precarious lifestyle,” said Professor Savolainen.

This is the first large study of reproductive strategies and diversity in fish. Some studies have been done with lizards, which have also evolved multiple strategies several times, including viviparity. However, viviparity did not lead to bursts of diversity in lizards. The advantage of viviparity seems to be balanced by the extinction of new species as they are less able to cope with new landscapes and climates.

Still, viviparity may be a successful strategy for colonising new environments, said Professor Savolainen. “Most animals lay eggs, but the majority of mammals employ viviparity, which may be one reason why they are so successful. However, evolving viviparity is complicated physiologically – it may require the development of whole new tissues such as the placenta.”