The Imperial staff and students unlocking the power of bitcoin technologies for the benefit of society.

Last month, news surfaced about one of the biggest data leaks in corporate history, which included details of more than 214,000 offshore companies listed by a law firm in Panama. Irrespective of the moral implications of what was revealed and who was in the list, the leak gave a glimpse of the scale of this hidden world – with some estimates suggesting that half of all global trade flows through so-called tax havens.

It’s a topic on the minds of the three founding Directors of the Imperial College Centre for Cryptocurrency Research and Engineering (IC3RE) when we meet. While the offshore economic model is founded on absolute secrecy, cryptocurrencies and the blockchain technology that underpins them aspire to complete openness (see panel, right). 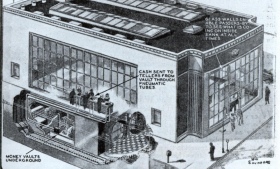 “Blockchains are tools for ultimate transparency and auditability, playing into the figurative concept of a glass bank, which dates back to the 1930s as a real idea,” says Centre Director Professor William Knottenbelt (Computing). “In the same vein, this technology could be especially useful in the philanthropy sector as a way for donors to see exactly where their money is going and how it is being spent. You’d know whether you invested in a worthy project somewhere or helped to fund the CEO’s car.” 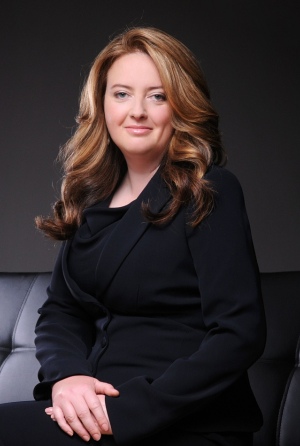 In fact, Dr Catherine Mulligan, Associate Director of the IC3RE, recently helped to prepare a report for the UK government exploring how distributed ledger technology can revolutionise services, both in public and the private sector. The IC3RE is also running a project looking at how distributed ledgers could make governments more transparent and bring citizens into the decision making process for tenders and contracts in order to reduce cost and potential for fraud.

“There are plenty of people thinking about these questions but actually it’s less of a technology issue and more of a regulatory issue – there are still a lot of people who would resist this,” says Catherine.

“I for one though would love to record every single one of my financial transactions on the blockchain because then I could just click a single button to send my tax return!”

Genesis of an idea

Like many good ideas in the technology sector, the IC3RE started life over a cup of strong coffee. Will, who is Professor of Applied Quantitative Analysis in Imperial’s Department of Computing, and Dyson Fellow Dr Rob Learney realised they shared a mutual interest in bitcoin and cryptocurrencies and hatched a plan to get set up some pilot projects in the area. They also established the Imperial Bitcoin Forum as a way of bringing together interested parties across the College and put on a launch event with keynote speakers. 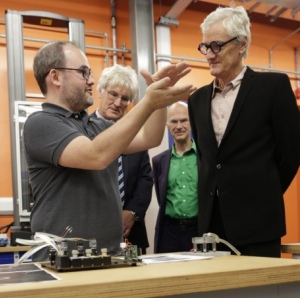 “We were really pleased with the response; we had people attending people from Mathematics, Physics, the Business School, Bioengineering − all showing great enthusiasm. There was clearly potential to do more with this.”

It was then that Dr Cathy Mulligan, an expert in telecommunications and a Business School Research Fellow, was tempted back from a senior industry job to help Will and Rob formally set up the IC3RE, which officially launched in November 2015.

In its initial phase, the Centre received seed funding from both the Faculty of Engineering and Department of Computing and is now actively looking at funding sources in the private and public sectors − having recently secured a grant from the EPSRC, while awaiting outcomes on several EU Horizon 2020 bids.

With banks and financial institutions now getting involved in cryptocurrency start-ups in a big way (after initially being very wary) Will believes that there is great potential for Imperial in pursing non-financial industry applications for blockchain technology.

“The advantage of being in an academic environment is that you’ve got the ability to take a wider look at the applications and consider those with a benefit to society rather than simply focusing on business efficiency and profit. You can also take larger risks and be a bit more bold in the kind of change you propose − plus you’re you not dependent on integrating with legacy systems.” 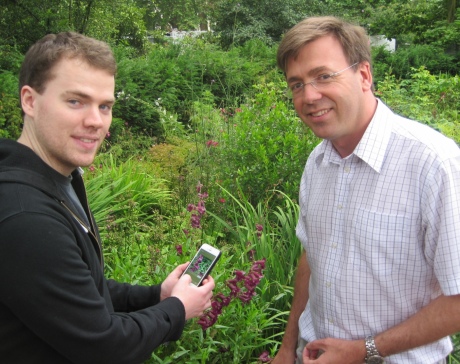 Professor Knottenbelt (right) helps a student with a mobile app

Several projects running at the IC3RE have already caught the attention of the wider world with their innovative real-world applications for the blockchain and distributed ledgers.

For example, a team of third year Computing students has come up with an idea to verify academic qualifications using the transactional mechanisms inherent in the blockchain. The concept features custom QR codes which can be embedded in CVs for instant verification by employers and a Chrome browser extension for LinkedIn integration.

Will is particularly excited about the potential of another project that seeks to validate the authenticity of the products and components used in supply chains − something of great interest to many different industries from defence manufacturing to food. 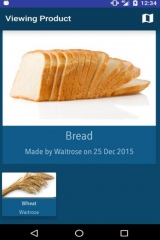 The concept leverages the combined power of both blockchain and near-field communication (NFC) technology. NFC tags attached to products or packaging would be scanned every time a component or ingredient arrives at a point of processing and that data would then be incorporated into the blockchain for perpetuity. The upshot is that anyone can scan the package to find out about all the ingredients or components and their history all the way back through the supply chain. An additional advantage is that regulatory authorities get a top down view of what’s going on across the entire ecosystem, as Will explains.

“If a consumer complains of becoming ill after eating a sandwich or salad, the regulator can very quickly trace it to say a contaminated batch of tomatoes and immediately alert every distributor or retailer who has scanned a product containing that ingredient,” says Will.

As well as individual projects like these, the Centre is carrying out more conventional academic research into the underpinning technology and protocols that make the blockchain and other distributed ledgers work. This acknowledges the fact that the technology is still very much in its infancy and in the process of ironing out bottlenecks – for example the Bitcoin network is currently limited to processing around seven transactions per second.

“There are so many weird and wonderful combinations of different types of consensus mechanism, different degrees of decentralisation and different kinds of cryptographic methods that you can use to secure the system. No one knows which of those is best in any particular scenario and I don’t think people have experimented with the full range of technologies yet.”

Will sees the next five to ten years as the point at which the technology will really take off and begin to be deployed – and hopefully Imperial will have made a significant contribution.

Although as with many truly transformative technologies, the best examples are likely to be the ones that we don’t notice and improve our quality of life in unobtrusive ways.

Imperial Master's student Harry Pettit carried out his own bitcoin adventure, trying his hand at trading and tracking down bitcoin hackers at Imperial's Data Observatory

What is bitcoin and the blockchain?

Many people first heard about bitcoin and cryptocurrencies around the same time they heard of entities like the Dark Web and the Silk Road − which we were led believe were using bitcoins to trade all manner of illicit drugs and other contraband. This was computer money for web geeks and cyber criminals who were looking to bypass the rules and centralised control of traditional power bases such as banks and national mints.

That was also the first impression held by Dr Rob Learney, now Associate Director of Imperial’s Centre for Cryptocurrency Research and Engineering.

“It was around 2010 when I heard of bitcoin. At the time I was completing an MSc at Imperial in the very different field of Biomedical Engineering and just thought this is money you make yourself on the computer. But after the price spiked in around 2013 I read a bit more into it and realised that actually there’s a very cunning idea underlying all of it – a way for people who don’t trust each other to come to a common point of agreement, creating a consensus mechanism for something as powerful as currency. I wanted to know more and go deeper.”

The technology that underpins bitcoin and other cryptocurrencies is called the blockchain. It is in essence a public database; in the case of bitcoin a sort of accounts ledger that contains the entire transaction history of every bitcoin in circulation. There are many copies of the ledger distributed across nodes around the world and no single person or institution controls it. Changes to the blockchain, such as a simple payment, must go through several cryptographic ‘hash’ steps before they are added to the chain across all the different global nodes. Because of the hash, the process is irreversible and you can’t just tamper with a single node, as all must be in agreement.

Crucially, it doesn’t have to just involve monetary transactions – it can be used to issue ‘smart contracts’, which automatically enforce an agreement between two parties.

That is why many people are touting distributed ledger technologies as the ‘internet of value’. From McDonalds to the Data Science Institute: My Bitcoin Experience Technology behind digital currencies like Bitcoin to benefit wider society