Princess Chulabhorn, who holds a PhD in chemistry, was welcomed to Imperial by the Provost James Stirling.

Professor Stirling told Princess Chulabhorn that: “Imperial College London is very proud of our links with Thailand both through students and the research that we do together. Today is a chance to celebrate that and to discuss ways we can work more closely together.”

Research is the key to everything

Princess Chulabhorn took the chance to meet a group of Imperial academics including Professor Simon Taylor-Robinson who spoke about Imperial’s lead in medical research.

Professor Elaine Holmes, an expert in computational medicine, told the Princess about recent developments in personalised medicine, medical innovations like the iKnife, and Imperial’s collaborations with Thai institutions to tackle cholangiocarcinoma, a form of bile duct cancer that has an especially high incidence in Thailand.

Princess Chulabhorn made clear her hope that Imperial and Thailand will collaborate in new ways in health and medical research, commenting that “research is the key to everything”, before discussing her own scientific work. 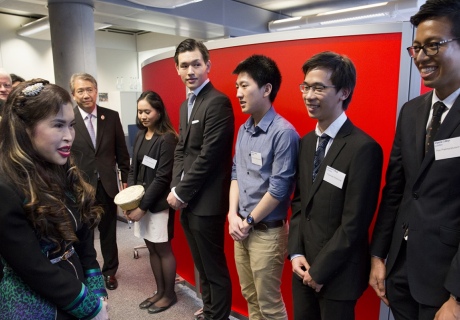 Several of Imperial’s 174 Thai students met the Princess while she was at the College. One of those students, Mike Asavarut, a doctoral student specialising in cancer gene therapy in the Faculty of Medicine, said: “It was great to meet the Princess. She asked us about our studies and told us about her plans for a new medical research institute in Thailand that will create new opportunities for scientists like us. She’s well known in Thailand for being heavily involved in science, technology and medical research – and for her healthcare community outreach, especially in cancer. 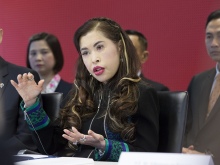 “Some of my research work with Simon Taylor-Robinson is on global health with respect to Thailand. Just last week we organised a Wellcome Trust-supported workshop, on medical anthropology and cholangiocarcinoma in Thailand, which was coordinated with SOAS.

“We have a lot to gain from collaboration with Thailand. Imperial has great expertise but to translate that you need raw data and resources from places like Thailand. There are mutual benefits.”

Mike, who serves as vice-president of the Thai Association in the UK, was instrumental in arranging the visit.

National News Bureau of Thailand report on the Imperial visit