ESE takes part in the Imperial Festival: from plate tectonics in Italy to getting "Curious about Mars"

There was a strong Department presence at the very successful Seismix 2016 conference held in Aviemore Scotland in May. Seismix is the biannual international geophysics conference where those that use active source, passive source and ambient noise seismic imaging techniques meet. It was an excellent conference where the latest results spanning a wide range of subjects that included imaging subduction zones, propagating dykes in Iceland and using ambient noise to monitor CO2 sequestration in Australia were presented. Jenny Collier was one of the convenors and she, Amy Gilligan and Carl McDermott presented at the conference. Lidia Lonergan was an invited keynote speaker.

Saeed Salimzadeh, a PDRA in the rock mechanics group, working on the EPSRC-funded CONTAIN carbon sequestration project, visited the Technical University of Denmark (DTU) from 12-20 May 2016, where he gave an invited talk entitled “Hydraulic Fracturing under Non-isothermal Conditions” in the DTU Centre for Oil and Gas.

Thomas Berndt gave a talk on "Viscous Remanent Magnetization Dating of Floods" at the Beijing Earth and Planetary Interior Symposium as well as an invited lecture on the same topic at China University of Mining and Technology in Xuzhou (Jiangsu Province).

Alessandro Chiarenza presented a poster “One, no one and one hundred thousand: A phylogenetic experimental approach to test the systematic position of the Kem Kem Abelisauridae (Dinosauria: Theropoda” at the Progressive Paleontology meeting in Oxford 19-22 May.

The Sustaiable Gas Institute launched a paper at an event hosted at the Royal School of Mines “Can technology unlock unburnable carbon?”. A summary of the paper and link to the full download can be found here.

Olivier Dubrule received the Honorary Membership Award from the European Association of Geoscientists and Engineers for his Research and Teaching work in Geostatistics.

PhD student Jon Tennant was awarded the Janet Watson Centenary Memorial Prize, in recognition of his numerous publications on diversity patterns across the Jurassic/Cretaceous boundary.

The Palaeobiology Research Group had a lot of success with the Palaeontological Association Undergraduate Research Bursary, with Susie Maidment, Phil Mannion and Mark Sutton each receiving a grant to fund an undergraduate for 2 months over the summer.

Suresh Parmanantham (MSc Student 2014-15) was awarded third place in the MSc Division of the SPE Regional Student Paper competition (Europe) for the paper “Production Optimization from Thin-Bed Pay Oil Reservoirs” based on his MSc project.

Branko Bijeljic recieved Procter & Gamble Award, awarded by The International Society for Porous Media (INTERPORE) in recognition of his outstanding research on pore-scale imaging and modeling..

Qinghua Lei received the “Chinese Government Award for Outstanding Students Abroad”, which was set up by the Chinese Ministry of Education to select up to 500 Chinese students worldwide from all subjects each year based on their academic achievements. The award includes a certificate and a $6,000 prize. Qinghua Lei and his PhD supervisor John-Paul Latham attended the award ceremony held at the Chinese Embassy in London on 19 May.

Gaia Stucky De Quay and Chris Jackson visited the BGS core store in Keyworth, Nottinghamshire to sample core from the East Shetland Platform, Northern North Sea. Gaia’s PhD focuses on the detection of broadly Tertiary-age, mantle-related vertical motions in NW Europe, using a combination of seismic reflection and borehole data. Core data, in particular the amount and type of organic material in these samples, may reveal information on changing water depths associated with these vertical motions. Gaia’s PhD is co-supervised by Gareth Roberts, and the lab work associated with this sampling will be undertaken with Jon Watson and Mark Sephton. 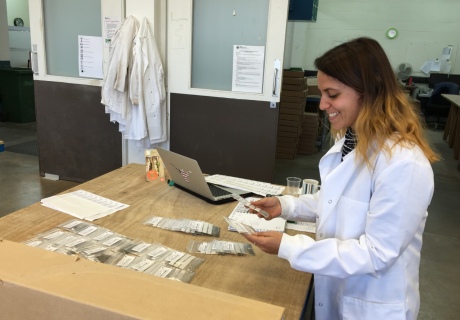 Thomas Berndt is currently on a two-month research stay at the Chinese Academy of Sciences (CAS) in Beijing funded by a British Council research grant. With Prof. Greig Paterson from CAS, thomas aims to study the effect of heating and cooling rates on palaeomagnetic recording.

Vamsi Ganti’s research on the prediction of sudden shifts in the course of deltaic rivers was reported by Imperial College News and other news outlets such as Science Daily and German radio station Deutchlandfunk.

Chris Jackson appeared on the radio talk show and podcast ‘The Naked Scientists’ (broadcast Monday 23 May), talking about the geology, history and utility of ‘salt’ rocks. The interview can be heard here. The Naked Scientists, which originated from Cambridge University, is a one-hour audience-interactive science radio talk show broadcast live by the BBC in the East of England, nationally by BBC Radio 5 Live and internationally on ABC Radio National, Australia; it is also distributed globally as a podcast.

Matt Genge’s paper on how ancient micrometeorites may be suggestive of an oxygen-rich Achaean upper atmosphere was reported in Imperial College News on 12 May.  The study implies that Achaean upper-atmospheric oxygen conditions may have been close to those of present day Earth. These findings, combined with indicators of an anoxic surface environment, infer minimal mixing between the upper and lower atmosphere during the Achaean.

Gareth Collins, Tom Davison, James Derrick and Martin Suttle exhibited their "Impact: Earth!” demonstration at an event to mark 25 years since Helen Sharman became the first Briton in space. The evening brought together representatives of the UK space industry, space researchers, policy makers and shapers, and the largest ever gathering of astronauts on UK soil. The Impact: Earth! stand featured an impact crater simulator and meteorite samples.

On the 7 and 8 May the University opened its doors to the public for Imperial Science Festival. Lidia Lonergan gave a popular talk on how plate tectonics has shaped the mountains of Italy and continues to affect the landscape we know today. PhD student Alessandro Chiarenza also enthralled the audience with his talk on dinosaurs. Professor Sanjeev Gupta headed up a team of Postdoc, PhD students and UG volunteers on the “Curious about Mars” stand. The huge banners of Mt. Sharp and of the Rover Selfie drew in the crowds and many had a ‘selfie with the selfie’! Children and adults alike took a “virtual day trip” to Gale Crater on Mars with the aid of high-resolution photographs and analogue rock samples. Postcards from Mars and 3D printed versions of the Mars Curiosity Rover, the larger of which took a staggering 72 hours to print, also went down a hit. Across the weekend ESE volunteers spoke to hundreds of visitors receiving numerous complements on both the display and the enthusiasm of our scientists, a complete success. 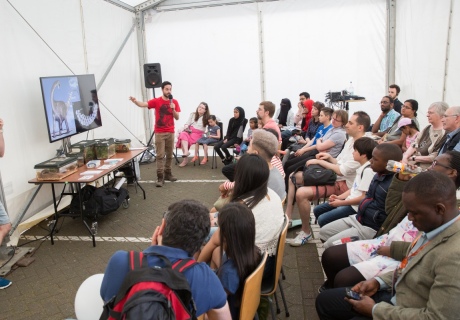 Susie Maidment gave a Pint of Science talk for the UCL festival titled ‘How to Weigh a Dinosaur’ in The Slaughtered Lamb pub in Clerkenwell.

In May 181 of our UG students headed off on various fieldtrips to Spain, Scotland, Sardinia and the Apennines but now they are back, and it looks like they had a fantastic time:

Apennines: Twenty-five fourth year undergraduates enjoyed another extremely successful field trip to the Apennines led by Alex Whittaker and Jon Hill. Over the course of the 12 day trip students visited field locations across Italy starting in Ancona, moving through Tuscany ending on sunny Elba. This provided the opportunity to study the geodynamic evolution of the Apennines from active thrusting to extension. Staff and GTA’s Alex McCormac, Helen Lacey, Amelia Davies and Marco Pizzi provided support throughout the trip. 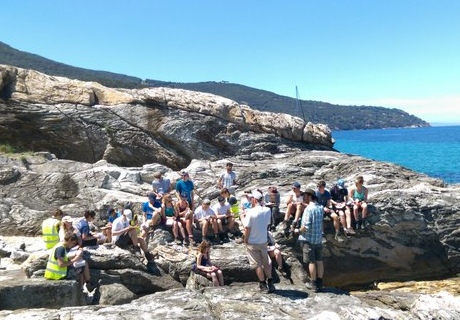 Scotland: Blue skies and warm weather represented an atypical Scotland fieldtrip this year. 33 students enjoyed 12 out of the 14 days rain free studying the Caledonian Orogenic belt and preparing for their forthcoming mapping projects.  Many thanks to staff Mike Streule, Donny Hutton, John Cosgrove accompanied of course by Havoc, Craig Magee, Susan Little and PhD demonstrators Martin Mangler, Ruth Davey, Olivia Sloan and Matt loader. Below is a photo from Clachtoll where the students were studying the erosional processes preserved on the Lewisian-Torridonian unconformity (courtesy of Craig Magee). 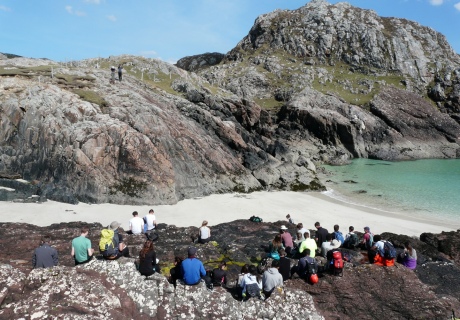 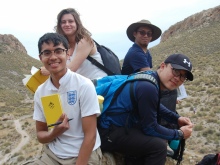 Sardinia: Third year undergraduates enjoyed the diverse geological delights of Sardinia in weather more typical of the Scotland trip this year. The trip was led by Matt Genge with support from Mark Sutton, Peter Fitch, Susan Little and Simon Kocher. The photograph below shows students logging across the Permo-Triassic boundary at Torre del Porticciolo, Sardinia. 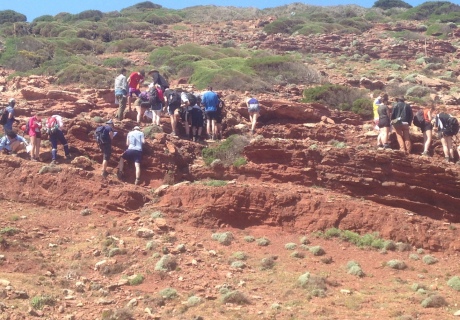 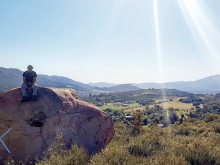 quantification of seismic hazards relating to a series of reverse faults in Southern California. The aim of the fieldwork was to conduct geological and geomorphic mapping and collect samples for cosmogenic nuclide dating on bedrock units and uplifted river terraces. Alex was kindly assisted by PhD student Ruth Davey and 3rd year undergraduate Charlie Singer. 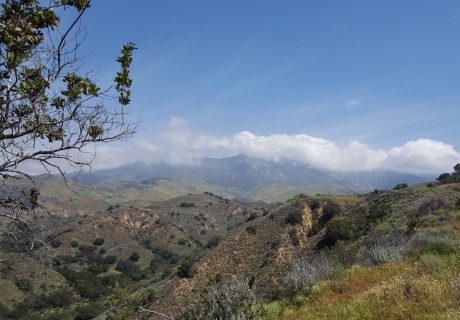 Anozie Ebigbo, a PDRA in the rock mechanics group, working on the NERC-funded HydroFrame nuclear waste project, has accepted a position as an Oberassistent in the Department of Earth Sciences at ETH Zurich. Anozie will take up his position in August at ETH, where he will continue to work on numerical modelling of flow and transport processes in the subsurface.

On 27 May 2016 the final year MSci students from ESE entered their final exam in fancy dress in what has now become a well-established tradition that we hope will continue through the years. The entire year group took part, with an eclectic mix of tomato sauce bottles, a pack of Pringles, and Bavarian yodelers undoubtedly reflecting various activities over the 4-years of their degree. Gondwana and Laurasia held up the side of the geophysicists.  With numerous transferable skills on top of their accumulated knowledge and understanding from their excellent degrees, many of the students have secured employment in a range of industries and businesses, and 35% of them are currently planning to start a PhD in October 2016, with others looking at further studies starting in the New Year. We wish the class of 2016 well in the future.

On 9 June Harry Brekelmans, projects and Technology Director of Royal Dutch Shell will discuss the importance of commercial and academic collaboration is his talk “Stepping Up to get Carbon Dioxide Down”. The talk will be held in G34 the Sir Alexander Fleming Building from 17:00-18:00.