From drone pizza delivery to driverless cars, the public consider which inventions will change our lives as London Technology Week begins.

Predictions about technological change over the next 20 years, made by Imperial’s Tech Foresight team, were put to the public this month as part of research to mark the launch of the third London Technology Week.

The YouGov survey, which was commissioned by London & Partners, reveals the technologies consumers think will disrupt traditional industries and drive forward the growth of London’s tech sector over the next two decades.

The findings highlight healthcare as a key industry thought to be set for change, with the public predicting that they will consult their GP from home using virtual reality technology. A large number of people also believe that 3D printers will be used to produce human organs for transplants, while just under half of those surveyed think the world’s first cloned human will have been born by 2036. 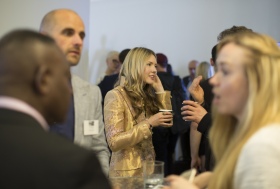 Fashion was another industry the public thought would be transformed, with over half of those surveyed predicting that we will regularly wear clothing connected to the internet within the next twenty years.

The predictions were made during Imperial Business Partners’ annual Tech Foresight showcase event last year, which brought together Imperial academics and corporate partners to consider how breakthrough lab discoveries could shape the next 20 years of technology, innovation and business.

This year’s event, Tech Foresight 2036, takes place this Friday 24 June, where some of the world’s finest minds will explore the future of materials and design.

Professor David Gann at the launch of London Technology Week

Professor Gann said: “London’s technologists, scientists, medics and entrepreneurs are creating the future. No city in the world enjoys London’s quotient of talent, technology, culture and capital. It is a potent combination.

“London is an environment where ideas flourish, design and innovation is embraced and new technologies are transforming our lives for the better. In London, we don’t stand still. Through our Tech Foresight team, Imperial Business Partners is taking some of the world’s finest minds from business and academia to predict how whole industries will transform within two decades. By considering breakthrough discoveries taking place in labs today, they help businesses look ahead to tech-driven trends and markets that will shape our future.”

London Technology Week is Europe’s largest festival of technology events. Taking place at locations across the city, the week aims to celebrate London’s booming technology sector – estimated to be worth £18 billion to the capital’s economy.

This year’s London Technology Week focuses on London as a centre for the convergence of disruptive technologies and their impact on traditional industries such as fashion, music, financial services and healthcare. 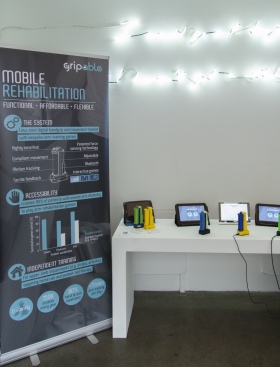 Monday’s launch event in Shoreditch brought together young entrepreneurs, CEOs and experts from across the tech and business worlds to showcase the way that tech is transforming the way we live and work.

At the event, Professor David Gann spoke about how London – a city rich in data, talent and deep science - has the perfect conditions innovation, positioning the capital as a global technology hub.

Ed Vaizey, Minister of State for culture & the digital economy, opened the event by calling London an "extraordinary hub for tech" and highlighting the importance of the EU talent pool to London's tech ecosystem.

The launch event also included an exhibition of innovations from Imperial College London students, including GripAble – a handheld device which allows stroke patients with hand and arm impairment to interact with rehabilitation gaming programmes on smart phones and tablets, and a robotic arm that can be controlled by tiny muscle vibrations.

The Mayor of London Sadiq Khan said: “London Technology Week shines a light on this hugely important sector of the economy and demonstrates how our city is open to trade, ideas and people from across the globe. Tech-savvy Londoners welcome new digital advances that are going to revolutionise the way that we live and it is crucial that we harness those ideas to help the capital work even better as a city. As someone who has helped to run a successful business, I look forward to supporting the tech sector so it goes from strength to strength over the coming years.”

BBC World News interview with David Gann City AM - VR doctors and drone delivered pizza: The six ways tech will change our lives in the next 20 years The Daily Mail - From drone delivered pizzas to avatar dating: Brits predict how technology will take over our lives in the next 20 years The Independent: Drone pizza delivery, connected clothes and VR doctors: Britons predict 6 ways tech will change their lives by 2036 The Mirror: Virtual reality GP appointments and internet-enabled trousers - here's the tech Brits want by 2036