How can firms stay innovative? Keep ahead of changing markets says academic The most innovative companies excel at spotting and surviving new market developments that affect their business, according to an Imperial academic.

Dr Mark Kennedy, Director of the KPMG Centre for Business Analytics at Imperial College Business School, was speaking at the second lecture in the Imperial Business in the City series on Tuesday evening. This new series of talks, held in the City of London, is designed to showcase Imperial’s expertise in tackling big business challenges, to industry leaders.

Dr Kennedy gave a new take on market disruption – the situation where a new market siphons demand away from an existing one, forcing them to make changes.

According to Dr Kennedy, although research generally emphasises the difficulties that large firms face when it comes to responding to disruptive market developments, breakthroughs in analytics are providing new ways of spotting and surviving coming disruptions.

He outlined cases of how successful businesses had responded effectively to disruption because they had a clear sense of coming changes. These included large firms in the digital marketing, banking, publishing and media industries who had developed the sense of urgency needed to overcome complacency when faced with disruption. 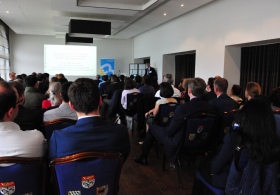 Dr Kennedy reflected on the difficulties facing established companies when facing disruption. Using the metaphor of lifeboats, he argued that innovators who do break with their past to survive disruptions seem to follow what he calls a “lifeboat logic”—a way of thinking that permits them to shift resources from established businesses, but only when really necessary.

Following Dr Kennedy’s talk, HSBC Global Head of Innovation, Christophe Chazot, observed that his goal—both as a sailor and an innovator—is never to get out of the big boat into the small one. “In general, you never want to leave your boat”, he said, “so you really only do that when the boat is low enough that you can step out of it into the lifeboat.”

Market forces are constantly fluctuating to outside events, as we’ve seen with Brexit and businesses need to get savvier at spotting change on the horizon.

Dr Kennedy and Chazot later discussed the challenges facing companies and investors in spotting and responding to disruptions. “Historically, the difficulties of seeing change coming are a big reason many organisations are caught out by disruption, eventually responding only when it’s too late,” said Dr Kennedy.

He then spoke of how new methods of change apply to politics. “We are currently doing some very exciting work to explain Brexit and the current US election cycle.” he said. He acknowledged there is no crystal ball, but then pointed out that in business, being able to spot and respond to change earlier than others is a significant source of advantage and profit.

Reflecting afterwards on the success of the talk, Dr Kennedy said: “Disruption is becoming a popular “buzzword” in the world of business, but not many people know that the concept has been around for at least 50 years – since before computers were invented.

Lots of people are unfamiliar with how it works and what it means for their company. Market forces are constantly fluctuating to outside events, as we’ve seen with Brexit and businesses need to get savvier at spotting change on the horizon.”

The Imperial Business in the City talks will take place six times a year in, or very near, the City of London. The events are open to all and pitched at director level or senior executives. The next lecture is planned for 28 September.