'Screen-and-treat' scheme for hepatitis B may prevent deadly complications Testing for hepatitis B virus during the PROLIFICA project

Research into Africa's first &apos;screen-and-treat' programme for hepatitis B suggests the initiative may reduce deadly complications of the virus.

The new findings, from researchers at a number of international institutions including Imperial College London and the Medical Research Council Unit The Gambia, also suggest the initiative is feasible and cost-effective.

Hepatitis B is the leading cause of liver cancer and cirrhosis in Sub-Saharan Africa. Yet most patients do not realise they are infected until they develop severe symptoms

The hepatitis B virus infects around 250 million people worldwide, and is transmitted through blood and bodily fluids. It is commonly transferred from mother to baby during birth. However the virus causes no immediate symptoms, and can remain silent in the body for decades until triggering severe complications such as liver damage (cirrhosis) and cancer.

The region most affected by hepatitis B is Sub-Saharan Africa, where around 80 million people are infected, explained Dr Maud Lemoine, lead author of the research from the Department of Surgery and Cancer at Imperial: “Hepatitis B is the leading cause of liver cancer and cirrhosis in Sub-Saharan Africa. Yet most patients do not realise they are infected until they develop severe symptoms. In our clinic in the Gambia we would often see patients, in their twenties or thirties, with liver tumours the size of footballs. They had probably been infected with the virus since childhood, but by the time they came to us in the clinic there was little we could do for them.”

To catch hepatitis infection earlier, before it causes conditions such as liver damage or cancer, the research team ran a pilot study testing people for the virus in communities in The Gambia, West Africa.

The programme, called PROLIFICA (Prevention of Liver Fibrosis and Cancer in Africa), was carried out between December 2011 and January 2014. The initiative was a collaboration between Imperial College London, the Medical Research Council Unit The Gambia, the Gambian Ministry of Health and Social Welfare, and the National Public Health Laboratories. 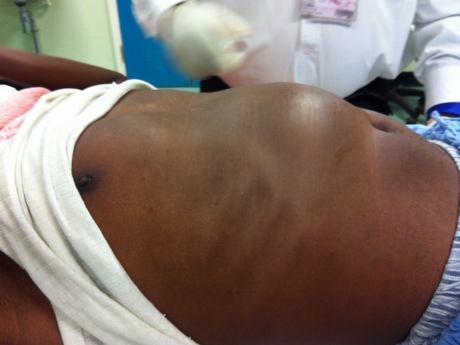 In the so-called 'Screen and treat' programme, the team used a cheap instant test to screen around 6000 people for the virus in the Gambian community, and referred infected individuals for further liver tests and treatment. They also screened around 6000 blood samples from blood banks, as previous research has suggested some donor blood is infected with hepatitis B. If an infected sample was detected, the team contacted the donor and referred them for tests and treatment.

The results, published in the journal The Lancet Global Health, suggest the programme is cost effective and may be able to prevent complications of the disease.

Although there has been an effective vaccine for hepatitis B available since 1990, around one third of the population of Africa are still not vaccinated. Only one in ten infants are vaccinated at birth, as recommended by the World Health Organisation, as many areas lack the infrastructures and resources to administer the vaccine. In addition, people born before 1990 - the date the vaccine became available - will not be protected. 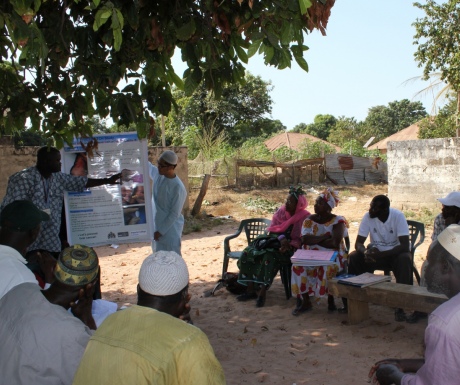 The PROLIFICA team talk with a local community

Dr Ramou Nije, co-author from the International Agency Research on Cancer explained: “In Africa, access to screening and treatment for hepatitis B is almost non-existent. Yet, viral hepatitis kills thousands of people each year. The disease can be successfully controlled with medication, but in many countries access to treatment is not available at low cost, and remains restricted to people who are affected with HIV/AIDS.”

The new study found 9 per cent of individuals and 13 per cent of potential blood donors tested positive for the hepatitis B virus. However, of those screened only 4 per cent of the individuals tested were deemed to have infection severe enough to require treatment with antivirals.

Dr Lemoine explained: “A relatively small number of people needed antiviral treatment, and the cost of this medication is far less than treating complications further down the line such as liver damage and cancer.”

The scheme also had a good screening coverage of 70 per cent, and the patients who required the antivirals kept to their medication schedule over the next year.

Dr Lemoine added: “Our study shows that screen-and-treat programmes targeting the general population are a feasible - and successful - intervention in Sub-Saharan Africa, and should be implemented in other areas in the continent.”

Professor Umberto D’Alessandro, Director of the MRC Unit The Gambia, added: “Hepatitis B and its consequences represent a major but often underestimated public health problem in Africa. This is clearly shown by the PROLIFICA programme which also underlines the importance of research in informing health policies and practices.

Testing for the virus involved a simple finger prick test

Dr Stefan Wiktor, lead of the Global Hepatitis Programme at the World Health Organization added: “The World Health Organization recently adopted a global strategy with a goal to eliminate hepatitis infection by 2030. To reach this goal, we will need innovative approaches, such as that developed by the PROLIFICA team, to provide testing and treatment services to as many people as possible.

Charles Gore, President of the World Hepatitis Alliance, said: “In May the world adopted targets for the elimination of hepatitis B. The most challenging of these is to diagnose 90% of those living with this virus by 2030 because this requires a public health approach that has been noticeably lacking to date. This project and its results are so important because they show not just that this can be done cost-effectively but how it can be done.”

The Honourable Minister of Health and Social Welfare in the Gambia, Dr Omar M Sey said: "The Gambia Government takes the public health threat of Hepatitis B as a cause of premature deaths in young adults very seriously. That is why it has given full support to both the Gambia Hepatitis Intervention Study (GHIS), a long-running Hepatitis B vaccination program funded by IARC, and the PROLIFICA project, a multicentre hepatitis B treatment programme funded by the EU. We are extremely keen that the data generated from these studies is now used to inform policy, specifically the implementation of a whole country screen-and-treat program to demonstrate that HBV elimination is feasible, in line with the recent 69th World Health Assembly global strategy declaration. It is our fervent hope that the successful strategic partnerships that have brought us thus far will continue into the future."

The study was funded by the European Commission, and the Gilead Company provided the antiviral treatments

"Acceptability and feasibility of a screen-and-treat programme for hepatitis B virus infection in The Gambia: the Prevention of Liver Fibrosis and Cancer in Africa (PROLIFICA) study" by Lemoine et al is published in The Lancet Global Health