A stem cell and HIV researcher and a biomedical robotics innovator are among those recognised in the Queen's New Year Honours list.

Professor Amanda (Mandy) Fisher was made a Dame for her fundamental scientific discoveries in HIV, subsequent work on stem cell science and epigenetics, and her strong advocacy for women in science. Dame Mandy is Director of the MRC London Institute of Medical Sciences (LMS) at Imperial. 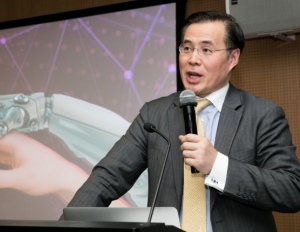 Professor Guang-Zhong Yang, Director of the Hamlyn Centre at Imperial, receives a CBE for his contributions to biomedical engineering.

Visiting Professor Vernon Gibson, who works in Imperial’s Department of Materials, was honoured with a CB for services to Defence. He was Chief Scientific Advisor at the Ministry of Defence between 2012 and 2016.

Professor Andrew George, who spent 21 years teaching medicine at Imperial until 2013 and chaired the Hammersmith Hospital Research Ethics Committee, receives an MBE for services to the ethical governance of clinical research.

Sir Roger Bannister, a St Mary’s alumnus and the first man to run a four-minute mile, was made a Companion of Honour - a special award for service of conspicuous national importance limited to 65 people at a time.

Professor Dame Mandy Fisher said: “I hope this recognition will enable me to make a real difference in two areas. First, to highlight the essential contribution that discovery science can make to life-saving treatments, even when this may not at first be obvious.

There’s strength in diverse teams in science, as in so many walks of life

Director of the MRC London Institute of Medical Sciences

“When I began work on HIV, my focus was on how to get bits of DNA into human blood cells to see if they would express certain genes. When we tried this technique with DNA from HIV we struck gold. Infectious virus was produced. With the luxury of hindsight this was important because it helped to establish HIV as the virus that caused AIDS, and allowed us to find out what each of the virus’s genes do.

“And second, it matters to me that it’s still a struggle to attract girls into science and to persuade them to stay. There’s strength in diverse teams in science, as in so many walks of life.

“Every day I’m inspired by our teams as they explore the impact of genetic and environmental factors in ageing, health and disease and work towards new therapies for conditions such as cancer, sepsis, diabetes and heart disease.

“We do all of this so much better because we are a diverse team and we’re creative.”

Several other Imperial alumni were also recognised in the New Year Honours list. Among them were several recipients of the OBE: Dr Martin Warren (Botany and Plant Technology 1975) for services to the environment; Professor Mary Lumsden (St Mary's Hospital Medical School 1977) for services to women’s health; and Professor Anne Willis (PhD DIC Chemistry 1987) for services to biomedical science and promoting the careers of women in science.

Jonathan Bloomer (Physics 1974) was awarded an MBE for voluntary services to children and young people, as was Thomas Hughes (MEng Aeronautics 1991) for services to British graduates in Silicon Valley and San Francisco.