Tropical forests need birds in order to recover from deforestation

Research in the Amazon suggests that loss of birds through deforestation prevents the recovery of rainforests, due to birds' roles in the ecosystem.

Biodiversity is essential for the health and resilience of tropical forests, and birds are a prime example.

They provide a range of ‘biodiversity services’ through their interaction with other species in the ecosystem, for example by keeping populations of plant-eating insects in check through predation and dispersing the seeds of more than 90 per cent of rainforest tree species.

The trees of a forest may look healthy, but if the animal species required for pollination or seed dispersal are gone, then looks are deceiving.

In a study published in Proceedings of the Royal Society B, scientists showed that intensive land-use, such as agriculture and ranching, leads to the local extinction of forest birds. This can prevent rainforests from recovering due to the loss of the biodiversity services that these birds provide.

The researchers found that primary forests, made up of mature native trees, retain a wide range of bird species capable of providing healthy ecological interactions: controlling insect populations and dispersing numerous types of seeds. This was true even when these forests had been disturbed by wild fires or selective logging, where only certain trees are removed.

Deforested areas like farmland, where many bird species have gone locally extinct, have dramatically reduced biodiversity services, as would be expected.

However, the researchers found that secondary forests, which had been previously cleared and now contain young trees, lacked many species of seed-dispersing and insect-eating birds found in primary forests, and this is likely to affect their ability to regenerate.

The study suggests that the rainforest’s ability to regenerate can be preserved even within largely cleared areas, so long as patches of primary or disturbed forest survive.

Senior author of the study, Dr Joseph Tobias, from the Department of Life Sciences at Imperial College London, said: “To maintain the capacity of rainforests to regenerate we need to support land-use management policies that maximise the extent of mature forests that have never been fully cleared, even if they are highly disturbed”.

Looks can be deceiving

The health of a forest ecosystem is usually measured in terms of the number of species it retains. However, this study also highlights that simply quantifying the survival or extinction of animal and plant species is not enough to determine rainforest health, as the interactions between species are crucial and these will determine whether biodiversity services have been lost.

“The trees of a forest may look healthy, but if the animal species required for pollination or seed dispersal are gone, then looks are deceiving. The trees are also likely to disappear over time,” Dr Tobias said.

“Our findings are a warning flag that we can’t just look at a snapshot of forest health as it appears now - we need to think about preserving the ecosystem processes that will allow forests to survive in the future.”

Birds of all shapes and sizes

The team collected field data on the composition of bird communities from 330 study sites in the Brazilian Amazon, sampling more than 450 bird species. 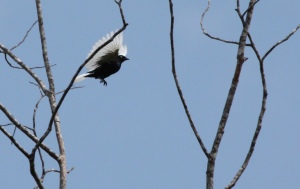 They also measured morphological traits, such as beak size, tail and wing shape, from specimens held in natural history museums in Brazil, the USA and the UK. Knowledge of such ‘functional traits’ can be used to infer the type of service a bird will provide in the ecosystem.

Together, these data allowed the researchers to assess how landscape change affected the tropical birds involved in important ecosystem processes, focusing specifically on seed dispersal and insect predation.

For example, birds with big beaks and wings, like guans, are responsible for dispersing large seeds in the Amazon Rainforest. The loss of these birds in open agricultural areas or secondary forests makes it difficult for large-seeded tree species to regrow or survive there in the future.

Other rainforest birds have adapted to a specialist insect diet. Where these go locally extinct, leaf-eating insects can become uncontrolled pests and prevent saplings from growing.

The research team plans to apply similar methods on a larger scale to assess the impact of human activity on global ecosystems. Dr Tobias added: “The next step is to try to use bird functional traits as a window into the effects of environmental change, with the goal of understanding and managing the health of ecosystems worldwide.”