The new student-led society will offer students the chance to engage in the latest developments in drone technology.

Following its launch last week Imperial’s DroneSoc seeks to be London's leading hotspot for drone enthusiasts. The society will host regular seminars, courses, and competitions for both students and the public, building on Imperial’s world leading research in this area and the work of the Aerial Robotic Laboratory.

Taking place at Imperial’s South Kensington Campus, the launch event featured demonstrations of a number of commercial drones including a DJI Phantom and DJI Mavic Pro. Attendees were also invited to get hands on with a number of drones in the specially erected ‘flight arena’. 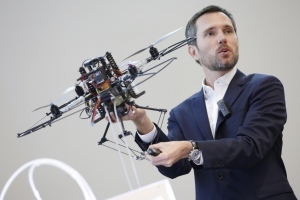 Dr Mirko Kovac, Director of the Aerial Robotics Lab, said: “DroneSoc provides a space for students to come in with their ideas and enthusiasm and work on developing new ideas in the area of drone technology.

“There is a huge opportunity in the market for this kind of technology and there is a real need for new advancements in the field. Having this facility at the College gives our students access to the information and resources to work towards meeting this demand in the future.” 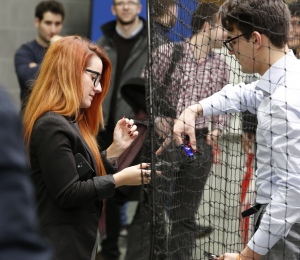 Demonstrations in the flight arena

The event also brought together leaders in the unmanned aerial system field from academia, industry and aerospace regulators with a range of speakers including Jonathan Nicholson, from the UK Civil Aviation Authority and Tautvydas Juskauskas, from drone developers DJI Europe.

Gerald Low a student from the Department of Aeronautics and one of the founders of DroneSoc said: “We had over 200 people at the event - it was great to see such a large and enthusiastic audience. The speakers all offered different perspectives into the issues around drones which was really interesting to hear. 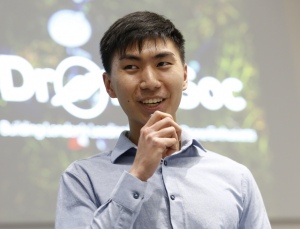 “We decided to start the society as there wasn’t really a space for drone enthusiasts at the College. By bringing everyone together we’re hoping to offer opportunities to learn new skills, meet experts from drone related industries as well as have some fun with the devices at our weekly flying sessions.”

You can find more about Imperial’s Drone Society, including upcoming events on their website.