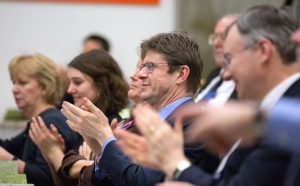 Addressing an audience which included the Secretary of State for Business, Energy and Industrial Strategy Greg Clark MP, Sir Paul outlined an intricate picture of life that ranged from life’s basic building blocks to complex biological systems like reproduction and homeostasis.

A leading geneticist and cell biologist, Sir Paul Nurse is Director of the Francis Crick institute and former President of the Royal Society. He shared the 2001 Nobel Prize in Physiology or Medicine for the discovery of protein molecules that control the division of cells in the cell cycle.

Nurse took the audience through five “great ideas in biology” - from cells to information systems - which he said all intertwined to create complex life. 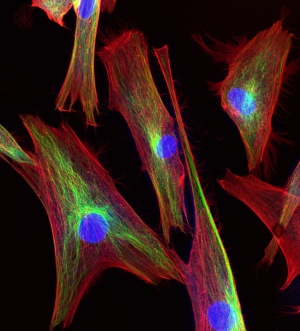 As the basic units of life, or “life’s atoms”, Nurse described how all living things are made up of cells that represent the function of the entire organism, be it animal, plant, or other.

From the days of Leeuwenhoek’s description of ‘animalcules’ (an early word for single-celled organisms) in 1677, Nurse highlighted how far we’ve come in terms of the cell when one considers that “cells may now be manipulated to make new tissues and possibly new organs for treatment or concept.”

As the basis of heredity, or “central dogma” of life, Nurse describes genetics as the “molecular explanation of how genes through DNA can determine characteristics of an organism.”

Referring to early geneticists’ thoughts on why similar traits are passed on through generations, Nurse muses as how we’ve come from “a place of lots description but very little understanding”, to mapping of entire genomes and pinpointing genes to specific traits. 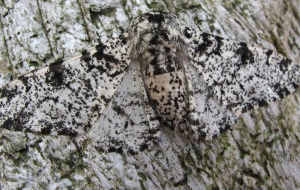 Peppered moth evolution is an example of population genetics and natural selection.

Referred to as “central to all biology”, Sir Paul described evolution by natural selection: “Within a species there are variants, and they are due to heredity differences. Those variants which are most successful will reproduce more, and they will pass on more of their genes to the next generation, occupying more of the population. This is survival of the fittest and gradually these changes in gene composition lead to changes in characteristics of the species, eventually leading to that species being unable to breed with the original form. That leads to evolution.”

Bringing in the importance of other scientific disciplines, Sir Paul made it clear that no single discipline is an island.

“In each one of our cells there are thousands of chemical reactions going on simultaneously… These reactions are expressions of the life of the cell,” essentially allowing cells to express genes and work together to create a living organism.

An example of this is metabolism, whose chemical reactions are “often the basis for understanding many diseases thanks to alterations in these processes, and is central therefore central to modern medicine and the pharmaceutical industry.”

Effectively bringing the above concepts together, Sir Paul described DNA as a “digital information storage device” and biological systems as a kind of “biological machine” occurring by natural selection rather than design. 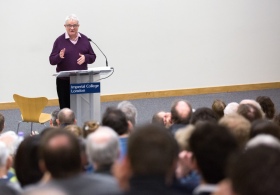 Comparing this to physics, he explained that “physics pre-1900 was mostly common sense. Physics in 1905 saw Einstein’s theory of relativity, and it starts getting complicated.” In the 1920s, quantum mechanics came along, plunging us into an “Alice in Wonderland world where nothing makes sense and cats are alive and dead at the same time. Nowadays, you can only make sense of physics with mathematics and reasoning that are simply beyond normal common sense.”

It leads him to wondering whether their “complexity will take us into a much stranger world where, like the changes that occur in physics, the very big and the very small become increasingly bizarre to a common sense mind.”

Sir Paul ends with a question: “Will the complexity of biology take us to a similar place? I think that might well be the case.”

Watch a recording of the event

Peter Lindsay, a distinguished alumnus of Imperial College who died in 2006, was Emeritus Professor at King’s College London and Research Professor at Queen Mary, University of London, and was distinguished for his contributions to microwave device theory, quantum electronics and the application of lasers in engineering.

Each year, a distinguished speaker discusses developments in their field that are enhancing the knowledge and understanding of scientists and researchers at the forefront of tackling challenges.