The Advanced Hackspace has grown to become one of the largest networks of makers and innovators within any university in the world - we find out how.

Hacking is a term that has a history of ambiguity and appropriation by various groups − from cyber criminals to ‘hacker moms’ who devise tricks to make parenting easier. The key aspect though, is that hacking is a dynamic and evolving concept.

Imperial College Advanced Hackspace has changed the way students and early career researchers at the College think about innovation – and now it could pave the way for a new model of interaction with industry and the private sector. We spoke with members of the Hackspace management team, Professor Oscar Ces and Dr Nick Jones, to find out more.

What is a hackspace?

It is a large prototyping warehouse that brings together people from different backgrounds – for example machine learning, coding, metalwork, synthetic biology, robotics, diagnostics and woodwork. Engineers, medics, life scientists, mathmaticians, physical scientists are all under one roof. There are now well over 100 hackspaces in the UK outside of the higher education sector, but we think that research intensive universities like Imperial have a great opportunity to take the hackspace concept to another level.

Imperial is the unique thing! By heavily linking to Imperial’s world leading resources we have made something very special. Most hackspaces use commercially available equipment and resources. Our kit is hot of the press from the Imperial ecosystem and includes for example technologies for manufacturing artificial cells, which you simply would not normally get in a public hackspace environment. Moreover, as it keeps evolving, the students and researchers draw in technologies from their local ecosystem. Also a regular hackspace might have a few technicians focussing on broad areas such as metalwork, but the expertise that feeds into the Advanced Hackspace ison a whole different level, with world-leading academics and scientists across the departments supported by our talented hackspace fellows.

You’ve now got over 2000 members, with a few hundred new recruits each month. Why has it been so successful? 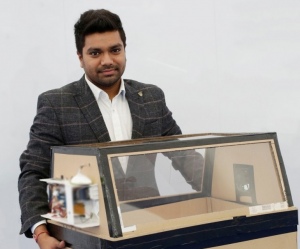 Partly because there was an unmet need. Historically, academic professors with a grant and a team have always been able to turn their ideas into reality. Yet if you were an undergraduate student, postgraduate, postdoctoral researcher or a lecturer without a grant, then it was very difficult to invent and innovate. Consequently many would leave College, then do the inventive step but with much less support. The Hackspace enables anyone with an idea to turn it into a working prototype. There are no barriers to them doing that and it’s free at the point of entry; the only cost being consumables. In fact we even support people’s ideas through small booster grants. The Hackspace members who came up with the successful ideas of BLOCKS and LifeCradle both received boost grants.

We have a stamp system and members can get activated in six spaces across College; think of it like visas in your passport. After safety training they can work there freely and use the equipment. We’ve really broken down the barriers across departments and faculties. Previously, if you were a chemist trying to use engineering kit, there would be considerable administrative hurdles to doing that. We essentially have a scalable set of unilateral agreements across College. 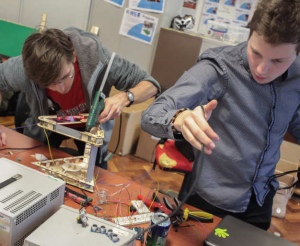 We’ve not imposed any rules on how the Hackspace is used and some students and researchers simply go to hang out and meet like-minded people, which is fine. A lot of people use it for day to day research – one student made a widget for a microscope which we would normally outsource to an engineering firm at considerable cost and delay. The student went off to learn metalwork in the Hackspace and just built it; so it can speed things up enormously. Other members use the Hackspace to support their spinout activities which is a huge growth area for us and the college.

And you run a programme of events as well?

Yes, I would say that the events are as important as the facilities themselves. We have expos to showcase things members invent; various different Hackathons [see below]; training classes on how to use specific machines or introducing a new cutting edge prototyping technology. We also recently started a Horizons programme, Introduction to Making & Prototyping, open to all first year undergraduates. We are also now talking to Departments with a  view to running large scale training programmes for undergraduate cohorts.

Tell us about your new space at Imperial’s White City campus?

We’re due to open an Advanced Hackspace in a building called The Invention Rooms, which will also include a Maker Space for local schools and Interaction Zone for public events. It came partly in response to an increasing level of interest from the outside world − large pharmaceutical companies, the personal care sector and engineering firms − who all wanted to be co-located with the Hackspace in order to rub shoulders with this community of creative people. The distributed model at South Kensington can’t quite accommodate that.

How exactly will companies interact with the Advanced Hackspace at the Invention Rooms?

Just as there are few rules for students and researchers using the Hackspace, we’ve tried to accommodate the different ways in which companies want to co-locate here. At the smaller scale, they may sponsor challenge walls and challenge rooms where they basically post questions on a wall and ask for possible solutions, with a number to call.  If they want to address wider problems and questions they can run a bespoke Hackathon, maybe with participants taking existing products to pieces and then rebooting them. 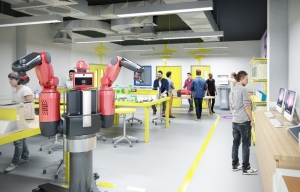 An impression of the Invention Rooms

Now some of the companies have started setting up Hackspaces internally, but they don’t know how to do it. It’s so different from their existing way of working. So they need to learn from us and there has actually been a lot of movement of Imperial people in that direction and I think that’s a good thing.

Can the Advanced Hackspace offer an alternative learning model for students?

I think it certainly democratizes science and puts ownership of science back into the curriculum. One question I often hear from prospective undergraduates is ‘can I do my own experiments’ and for a long time the answer to that was no. The experiments they did were scripted and lab based. But the Hackspace provides that opportunity for scientific exploration. Also a student might be in mechanical engineering but have a biological question. By giving them that access we’re encouraging interdisciplinary thinking from an early stage in their career.

The major characteristic you need to be a successful scientists is to be entrepreneurial − identify the right problem, work out all the angles and find the resources. That’s what the Advanced Hackspace makes possible. 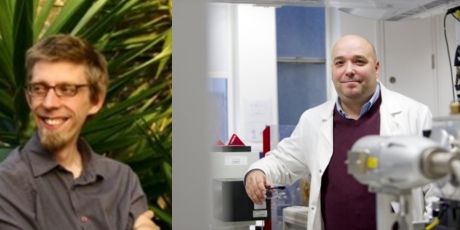 Music streaming giant Spotify acquires Sonalytic – a software start-up that can identify individual songs, mixed content and short audio clips with unparalleled robustness and speed. Sonalytic was founded at Imperial by post-doc Martin Gould and was a VCC finalist in 2016.

Eight of Imperial’s entrepreneurs are featured in the Forbes 30-under-30 Europe list, including the creators of LifeCradle, Buildrone, Freshcheck, Aeropowder (inset, above), Moya Power, Chrysalis Technologies and Desktop Genetics. Inside the Imperial College Enterprise Lab