The Duke of York meets the founders of Ooho

The 18,000 sq ft incubator, based at the College’s White City Campus, will provide state-of-the-art laboratories, office spaces and conferencing facilities, as well as an incubation programme, to help start-up and spin-out companies grow and develop. 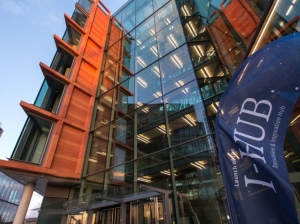 It forms part of the Translation and Innovation Hub (I-HUB) – a flagship building which aims to drive forward commercialisation and translation of research and innovation for the benefit of society. The 13 story facility will co-locate start-ups, entrepreneurs, and major corporations alongside Imperial’s academic community.

The White City Incubator moves to its new home from its previous location at Imperial’s South Kensington Campus, where it has attracted more than a billion dollars of investment in under a decade.

The I-HUB is managed by Imperial College ThinkSpace, which specialises in the co-location of knowledge-intensive organisations with Imperial research groups.

At the launch event, The Duke of York met with several companies who are currently based in the incubator facility. This included Ooho, an Imperial student-founded start-up who have created the world’s first ‘edible water bottle’. 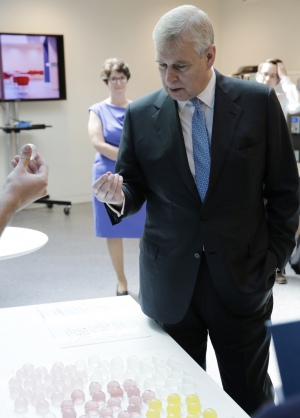 The Duke of York looking at Ooho

Ooho is an edible, tasteless and biodegradable membrane made from algae that can be used to contain water and other liquids in a small ‘bubble’. They hope that their product will help tackle the problem of plastic waste.

They explained to The Duke of York how a recent fundraising campaign helped them to raise over £500,000 – and how they plan to introduce trials of their product this year at events such as marathons and music festivals.

The Duke of York also heard from Mimica, a start-up who are developing next-generation food labeling to reduce food waste and improve safety. Their special labels experience decay at the same rate as food, helping consumers identify when food is safe to eat and when to dispose of it. 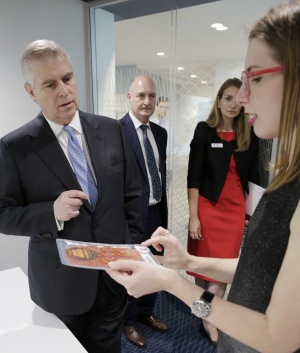 The Duke of York is a strong supporter of initiatives to encourage entrepreneurship and innovation. Pitch@Palace, his pitching competition for tech start-ups, is now in its 8th cycle. Previous Imperial successes at the competition include Malav Sanghavi, who took home third prize in 2015 for a low-cost baby incubator made from cardboard, intended for use in the developing world. 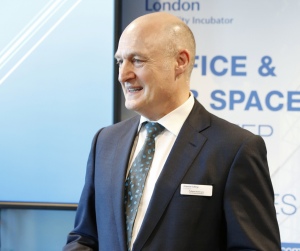 Professor David Gann, Vice President (Innovation) said: “This is an exciting time for Imperial. Our first incubator produced more than 60 companies, generated more than half a billion pounds worth of investment, and created countless jobs. We are scaling up at White City with a new, vibrant environment to incubate businesses started by our staff and students. We have opened our doors to our business partners and to support entrepreneurs in the wider community.”