Dr Sophie Helaine has been awarded a highly sought-after Lister Research Prize Fellowship for her work with Salmonella bacteria.

Dr Sophie Helaine, a microbiologist at Imperial’s MRC Centre for Molecular Bacteriology and Infection (CMBI), has won one of five prestigious research prizes awarded every year by the Lister Institute of Preventive Medicine for biomedical research. Following a Junior Research Fellowship, she formed her own research group in 2012 to study the formation and biology of Salmonella ‘persister cells’ during infection. Persister cells can lay dormant in the body, hiding from the immune system, until they ‘wake up’, triggering a repeat infection.

Salmonella bacteria can contaminate uncooked chicken and eggs, leading to food poisoning. Some strains of the bug can cause typhoid fever, a critical illness with patients needing antibiotics.

Describing the group’s work after a key study was published in the journal Molecular Cell last year, Dr Helaine, said: “Whenever bacteria such as Salmonella invade the body, around one-third of the bugs 'cloak' themselves as a defence mechanism against the body's immune system. They enter a type of stand-by mode, possibly to hide from the body's immune system, that means they are not killed by a­ntibiotics.” 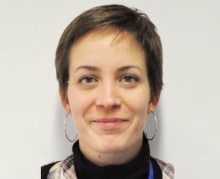 The bacteria stop dividing and can remain in this dormant state for days, weeks or even months. When the immune system attack has passed, some bacterial cells spring back to life and trigger another infection.

Dr Helaine added: "This is why, for instance, a woman may think she has recovered from a urinary tract infection, and yet days or weeks later it seems to return. Many patients may assume it's a different infection but actually, it's the same bug."

The Lister Research Prize will enable Dr Helaine’s group to investigate the formation of persister cells during infection more closely using a combination of techniques, including microscopy tools and flow cytometry. On winning the prize, Dr Helaine said: “I am truly honoured to receive the Lister Research Prize, and it will allow my group to embark on new approaches to investigate Salmonella persisters.”

I am truly honoured to receive the Lister Research Prize, and it will allow my group to embark on new approaches to investigate Salmonella persisters

Professor David Holden, Director of the MRC CMBI commented: “I’d like to offer many congratulations to Sophie on this wonderful achievement. Lister Prizes are extremely competitive and prestigious and it’s very pleasing to see this award going to such a well deserving candidate. Remarkably, this is the second Lister Prize that has been awarded to a CMBI scientist recently – Dr Serge Mostowy won a prize in 2015 – so together these prizes reflect very well on the quality of our young scientists at the CMBI.”

Since its launch in 2004, the Lister Research Prize has awarded over 50 Fellows with a one-off prize of £200,000 aimed to help support and nurture future leaders of biomedical research. A unique aspect of the prize is its flexibility, allowing the winners to use the funds in any appropriate way to support their research – albeit their salary – over a period of up to five years. The Lister Prize is competitive with around 100 applications received every year for only five Fellowships.