The Department of Chemical Engineering instituted the Sir William Wakeham Award in 2014 to recognise early career researchers, with no more than 5 years of research experience, who have made significant contribution to their field. The award was named after Sir William Wakeham, former Head of Department (1988-1996) and former Deputy Rector of the College. Sir Wakeham, who is now a visiting professor at the Department, has also served as a Vice-Chancellor of the University of Southampton and was knighted in 2009 for services to chemical engineering and higher education.

The Sir William Wakeham Award comes with a £2000 cash prize as well as the opportunity to give a presentation at the annual postdoctoral symposium. The recipients are decided by a panel of academics, chaired by Professor Dame Julia Higgins and including Professors Geoff Maitland, Paul Luckham, George Jackson and Dr Kyra Campbell. This year, the winners of the award were Dr Petr Yatsyshin and Dr Robert Woodward, while Dr Anna Hankin was highly commended.

We spoke to this year’s winners about receiving their awards, and how they feel the award will benefit them and their work

Which of your professional accomplishments do you think have contributed to your being selected as a Wakeham Award winner?

PY: I was fortunate to publish a number of good papers recently, as well as doing my best to contribute to teaching in the Department, where I covered the Linear Algebra and Chaotic Dynamical Systems parts of two courses led by Professor Serafim Kalliadasis. My teaching was received very well by the students as reflected by the high SOLE scores.

My research is in the general field of statistical physics of inhomogeneous fluids and soft matter. Specifically, I am a big fan of a particular formulation of statistical mechanics, commonly known as classical density functional theory (DFT). In short, DFT allows the introduction of the spatial dependence of fluid density into the thermodynamic equation of state. More importantly though, classical DFT provides a computationally-friendly framework, suitable for investigating a wide variety of soft-matter systems, from simple liquids with Lennard-Jones interactions, to solutions of colloids, macromolecules and polymers, to bio-fluids, and to even non-equilibrium phenomena within the Smoluchowsky dynamical picture, e.g., crystallisation, colloid sedimentation and self-assembly.

In particular, our recent breakthrough here was the discovery of a number of novel phase transitions for fluids on heterogeneous substrates. The corresponding article was highlighted by the reviewers as being particularly significant to the community and featured on the JPhys+ blog.

RW: I wrote a paper on the utilisation of emulsion-templates in the production of designable carbon foams from cheap and simple starting materials. These foams show potential in a huge array of applications owing to their high-surface areas, tailorable pore structures, excellent electrical conductivities and very simple synthesis. In the field of carbonaceous materials, Carbon is considered a flagship journal, so we were delighted when our manuscript was eventually published there. I had a great deal of input into this work, which resulted in my corresponding authorship of the final manuscript.

In addition to this, I also taught tutorial groups for up to 4 hours a week in the Chemistry module. As post-docs, we take on this work voluntarily; I think this highlights our willingness to contribute not only to the education of young engineers, but also to the Department as a whole.

How did it feel to have your work recognised in this way?

Winning this award gives me a lot of motivation to stay on in academia, which is a very challenging yet fulfilling environment.

PY: I feel particularly happy to be awarded here, at my alma mater. Imperial College delivers incredible research across a wide spectrum of disciplines, including the fundamental sciences that underpin chemical engineering: chemistry, physics and mathematics. Winning this award also gives me a lot of motivation to stay on in academia, which is a very challenging yet fulfilling environment. I would strongly recommend to all postdocs in the Department, who feel like they have obtained good results, to apply and compete for  a Wakeham Award. They might just be surprised. 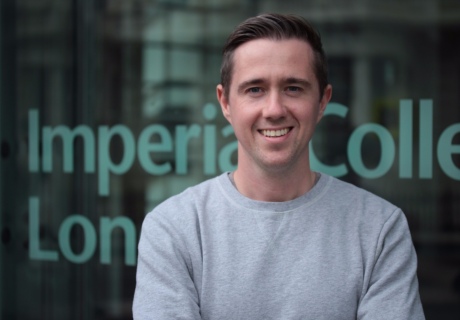 RW: I feel extremely grateful for the recognition. I am very proud of the paper published in Carbon, as I made a significant contribution to it and the award certainly feels like an acknowledgment of that. However, as I’m sure the majority of scientists would agree, I could not have learnt so much about these systems without the help of other very talented scientists, so I am also pleased that everyone who contributed to the manuscript is also able to enjoy the recognition that the Wakeham Award brings to the work.

How do you think receiving the award will benefit you and your career?

PY: This award is one of my greater achievements, and it will have a special place on my CV. My immediate career move will be to start intensively seeking a permanent academic position in the UK.  I think that having my work awarded by a highly-decorated panel will give my search some real momentum.

I love what I do, and I would like to continue in the direction of academic research as my career advances, so hopefully this award will help others to recognise the progress I have made since completing my PhD

RW: The award recognises early career researchers who have not only made a significant contribution to their field, but have also advanced their personal development, so it provides good evidence of this when looking to opportunities in the future. I love what I do and I would like to continue in the direction of academic research as my career advances, so hopefully this award will help others to recognise the progress I have made since completing my PhD in 2013. In all honesty, it has helped to improve my self-confidence somewhat and made me a little less doubtful of my abilities, something I think we can all suffer from at times.

What does your day-to-day work entail?

PY: I am a Research Associate in the group of Complex Multiscale Systems led by Professor Serafim Kalliadasis, who is my teacher and mentor. I also did my PhD with Professor Kalliadasis. Although staying for a while at the same place is sort of “frowned upon” in academia, I enjoy the creative freedom of working in the Complex Multiscale Systems group and the Department of Chemical Engineering. We have amazing collaborations with great scientists all over the world. This means that we have the rare opportunity of working on very different and exciting projects, and on the highest level internationally. Together with Professor Kalliadasis, we recently secured funding to create an open-source classical DFT library. This is a very exciting project, and I will try to focus on it in the near-future.

RW: When I received the award I was just about to finish my position under the supervision of Professor Alexander Bismarck as a member of the Polymer and Composite Engineering (PaCE) group. The position involved the production of nanoporous carbon materials and the development of novel 3D graphene structures, and it was owing to aspects of this work that I received the Wakeham award. I have recently started a new position within the department in the Tomorrow’s Chemical Technologies Lab with Dr Roberto Rinaldi, working on the valorisation of lignin and lignin derived materials. Dr Rinaldi was recently awarded an ERC Consolidator Grant and we are all extremely excited about the direction the project is going in.

Who has helped you along the way leading up to this award?

Last but not least, I wish to acknowledge my friends and collaborators, Drs. Miguel Durán-Olivencia and Marc Pradas for introducing me to the world of nucleation and phase field modelling. Finally, I would like to thank my girlfriend Rocio Tolosa Cabello and my mother Professor Svetlana Bezukh for their selfless support through the years.

RW: As I mentioned earlier, I did not carry out the work alone so I would like to thank Professor Alex Bismarck and the entire PaCE group for their contributions, and more importantly for a great three years together. Additionally, I would like to thank Professor Milo Shaffer’s NanoHAC group over in the Department of Chemistry, and Dr Camille Petit’s group here in the Department of Chemical Engineering, both of whom have helped me greatly during my time at Imperial.